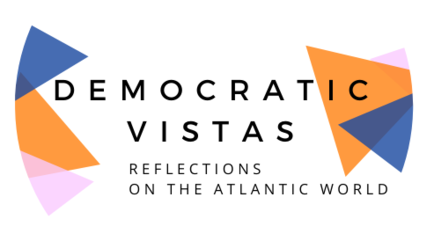 Want to discuss your research?
Interested in learning more about
premodern topics?
Open to Bachelor's, Master's, and PhD
students from any program!

Modernist Memories: 1922, Before and After

Russ Castronovo (U of Wisconsin-Madison)

»American Insecurity and the Origins of Vulnerability: Some Propositions and Axioms«

»Coconut Colonialism: Workers and the Globalization of Samoa«

All events take place via Zoom:

About the lecture
Global climate change can only be tackled at the international level. The European Union and the United States both carry a major historic responsibility in terms of cumulative greenhouse gas emissions since the beginning of the industrial revolution. Thus, since the early 90’s the EU and the US have played prominent roles in developing solutions to this global challenge and in the international negotiations on climate change. Both negotiated and signed the UN Convention on Climate Change, the Kyoto Protocol and the Paris Agreement. Most recently, both announced to reach net zero greenhouse gas emissions by 2050. However, both have pursued quite different domestic policy approaches. While the EU has been a rather reliable international partner, the record of US engagement and implementation of the international climate agreements has been rather mixed. It strongly depended on the political will of the actual administration in Washington. What unites and what divides the two players? How did climate change feature in the transatlantic relationship over the past decades? How does the rise of China as an economic and geopolitical power influence the respective roles of the EU and the US? What promises do transatlantic relations hold for international climate change policy in the coming years?.

More information on the event here.

Join the virtual info event via this link.

The Master's Program in American Studies 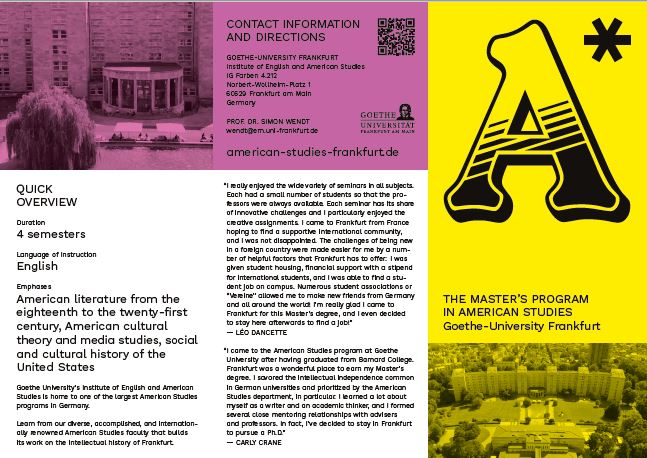 It's not a seminar. It's not a lecture, either. Fully Booked gives you the chance to get to know important works of American literature and discuss them with your peers. Finally a reason to read those books you've always meant to read - but didn't want to read only by yourself!

Each book will be introduced by a member of the American Studies department. Then the floor is open.

More info on the Flyer.

Carmen Maria Machado, Her Body and Other Parties, presented by Peggy Preciado

Afropessimism
A Reading & Conversation with Frank B. Wildersons III

Frank B. Wilderson‘s 2020 book Afropessimism has generated a fervent debate about the lasting presence of slavery and the centrality of anti-Black violence for the project of modernity. Wilderson‘s melange of memoir, philosophy, and poetic reflection has instantly become a reference point in a branch of critical theory that interprets the tenacity of anti-Black racism as a sign that the subjugation of Black people organizes Western civilization. Nominated for the National Book Award in Nonfiction, Afropessimism is provocative in the best sense. As Claudia Rankine puts it: „There are crucial books that you don’t agree with, but one still comes to understand the importance of the thought experiment. Afropessimism is one of those books.”
Frank B. Wilderson will read excerpts from Afropessimism and engage in a conversation with his German translator, Jan Wilm. The event will conclude with a Q&A-session with the audience.

Please register for the event here.

Memory Studies is an international and interdisciplinary convergence field. It addresses – broadly speaking – the interplay of past and present in sociocultural contexts. Memory Studies is interested in the social shape of individual memory as well as in the collective generation of past, present, and future.
The Frankfurt Memory Studies Platform (FMSP) is an initiative of the Forschungszentrum für Historische Geisteswissenschaften (FzHG). It brings together people and projects from history, sociology, literature, arts, media studies, psychology, and other relevant disciplines in a dialogue about memory. It wants to shape the future of memory studies by developing and discussing new research questions and new methodologies.
The activities of the FMSP revolve around three main Research Lines: Transcultural Memory, the Mediality of Memory, and Memory and Narrative.

The past two decades have witnessed a palpable “turn” to the perpetrator in art, theater, documentary filmmaking, literature, and
other cultural arenas. This has gone hand in hand with a growing interest, within cultural memory studies, in questions of guilt,
complicity, and responsibility in large scale violence. The figure of the perpetrator poses fundamental challenges to memory studies,
which as a field has largely come into being around the figures of the victim and the witness. In this talk I will explore the implications
of the perpetrator “turn” for cultural memory studies, focusing specifically on the ethical, aesthetic, and political questions that arise
when we consider how we remember perpetrators of mass atrocities and how those perpetrators themselves remember their actions
after the fact. I am particularly interested in perpetrator testimony, both oral and written, documentary and fictional, and how it is
framed, staged, and (re)mediated in cultural forms. Drawing on a wide range of examples from literature, film, and documentary
theater, this talk aims to provide an overview of the most salient representational strategies for the cultural encounter with the figure
of the perpetrator.