The Deutsche Forschungsgemeinschaft (DFG) has approved a third funding period for the SFB/TR49 spanning four years from 1.7.2015 - 30.6.2019 with an overall package volume of 8.0 million Euros. With this decision, the DFG follows the very positive recommendations of an international review panel, which had reviewed the grant application in May 2015. [more in German] [more in English]

Condensed matter with strong many-body interactions is characterized by unusual, at times novel collective behaviour, which cannot be understood by the properties of its individual constituents. These strongly correlated systems normally show a high degree of complexity resulting from the interplay of several degrees of freedom (charge, spin and angular momentum) and their coupling to the ion lattice.

Within the framework of the SFB/TR49 the collective behaviour of interacting many-body systems will be investigated on a broad phenomenological context. The topics to work on embrace cooperative phenomena such as the Mott metal-insulator transition, superconducting/superfluid phases with strong interactions or Bose-Einstein condensation under various and sometimes extreme conditions. Besides the properties of the ground state, excitations and exchange processes, also containing dynamical aspects of correlations and coherence, will be investigated.

Our approach is characterized by focussing on the phenomenon: the combination of a wide variety of selected materials – from simple model systems like ultra-cold quantum gases or magnon systems to complex quantum magnets or metal-organic solids – makes it possible to separate generic properties from material-specific phenomena. Common to all systems is a high degree of variability giving rise to a purposeful material design by varying the chemical or physical parameters of the system.

In addition to the strong interaction taking place between theory and experiment in the fields of physics and chemistry, the SFB/TR49 succeeds in linking the fields of quantum optics and solid state physics which, till today, have tended to be treated separately. 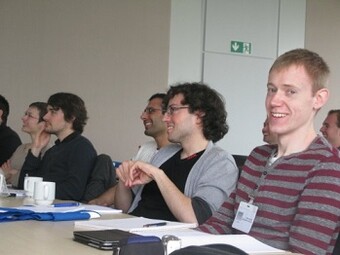 Participants of the Integrated Graduate College of the SFB/TR49 at an International School in Königstein, April 2014.

Graduate college at the SFB/TR49 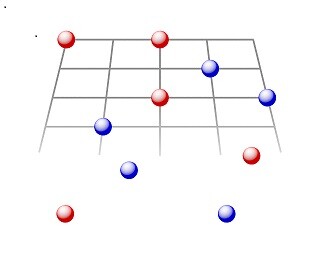