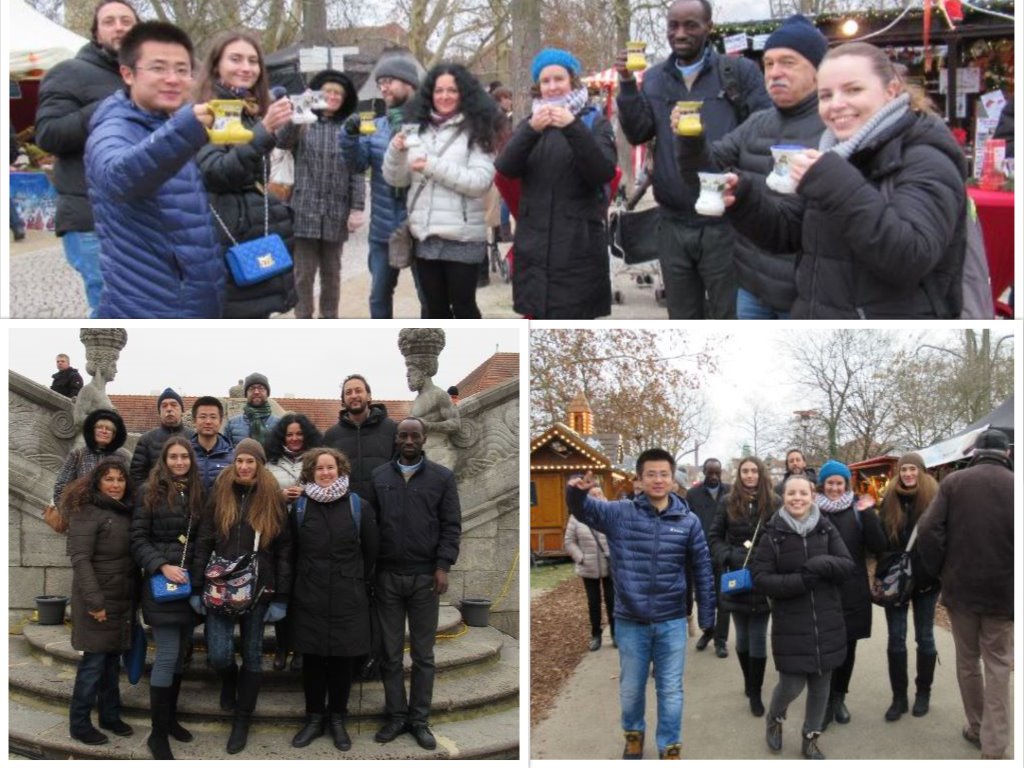 Winter is a miraculous season in Germany. There are Christmas markets everywhere, sweet scents in the air, and an atmosphere of holidays. On Saturday, 15th of December, the GWC has arranged a trip to the Christmas market in Bad Nauheim. Bad Nauheim has become famous thanks to its saline springs which made the town a popular health resort. The Sprudelhof, which can be translated as the courtyard of springs, served as Christmas market place. This market surrounded a big pool with warm mineral water. This picturesque landscape did not only please the eye, but was also a great place to get to know German Christmas traditions, for example by tasting Glühwein as we did. After that our fellow researchers have got a chance to investigate the Christmas market and its pequliarities. We are sure, it was a great experience for everybody! 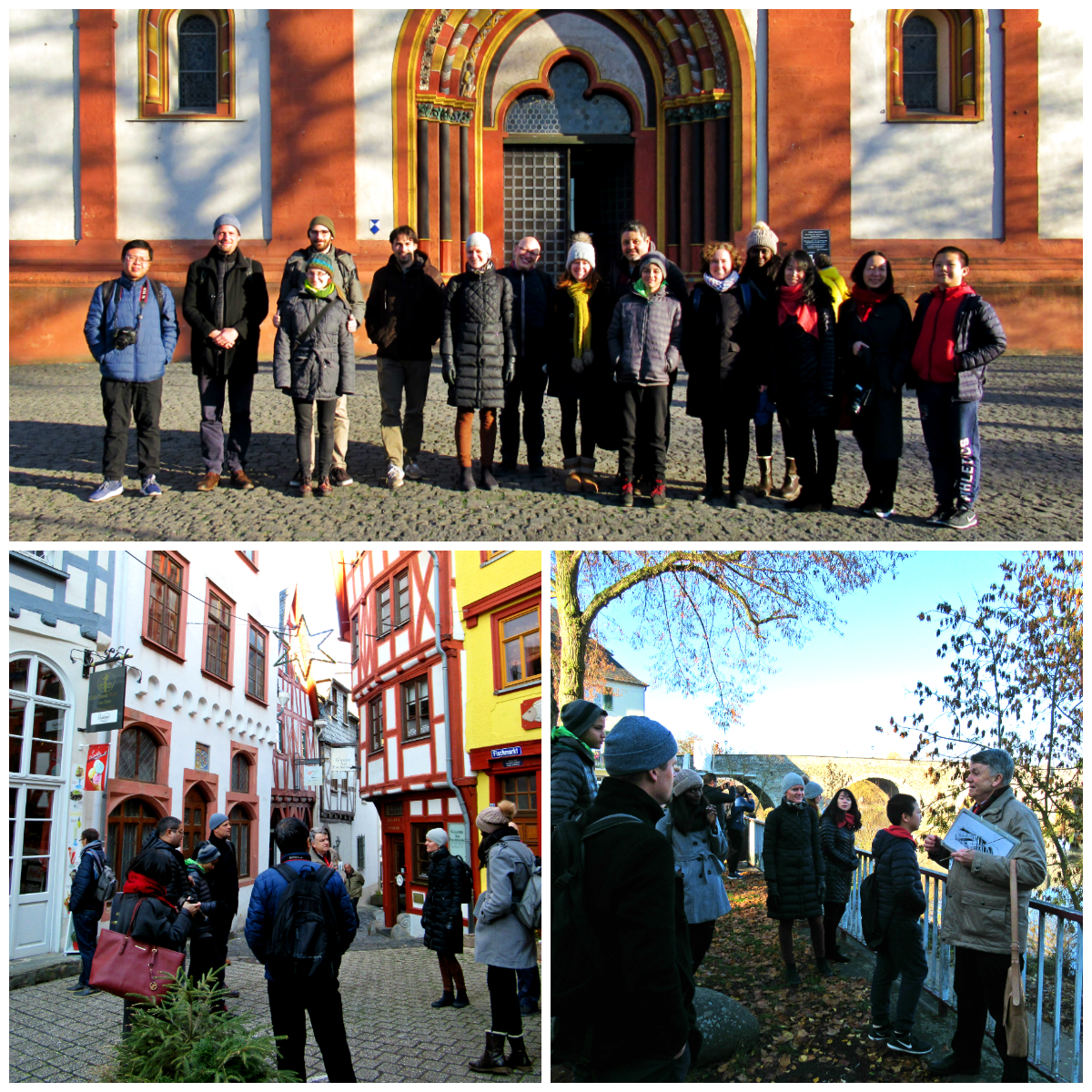 On Saturday, 17th of November, the GWC took a group of international researchers to a trip to the outstanding medieval town of Limburg. We started our trip with a guided tour around the well-preserved historical city center with its numerous picturesque half-timber houses and a panoramic walk along the river Lahn. Afterwards, we took a rest and enjoyed a traditional Hessian lunch at the cozy restaurant “Burgkeller”. Finally, we finished our trip with a tour through the famous St. George‘s cathedral, a masterpiece of late Romanesque style, and a visit to the museum Staurothek. We will return to this place for sure! 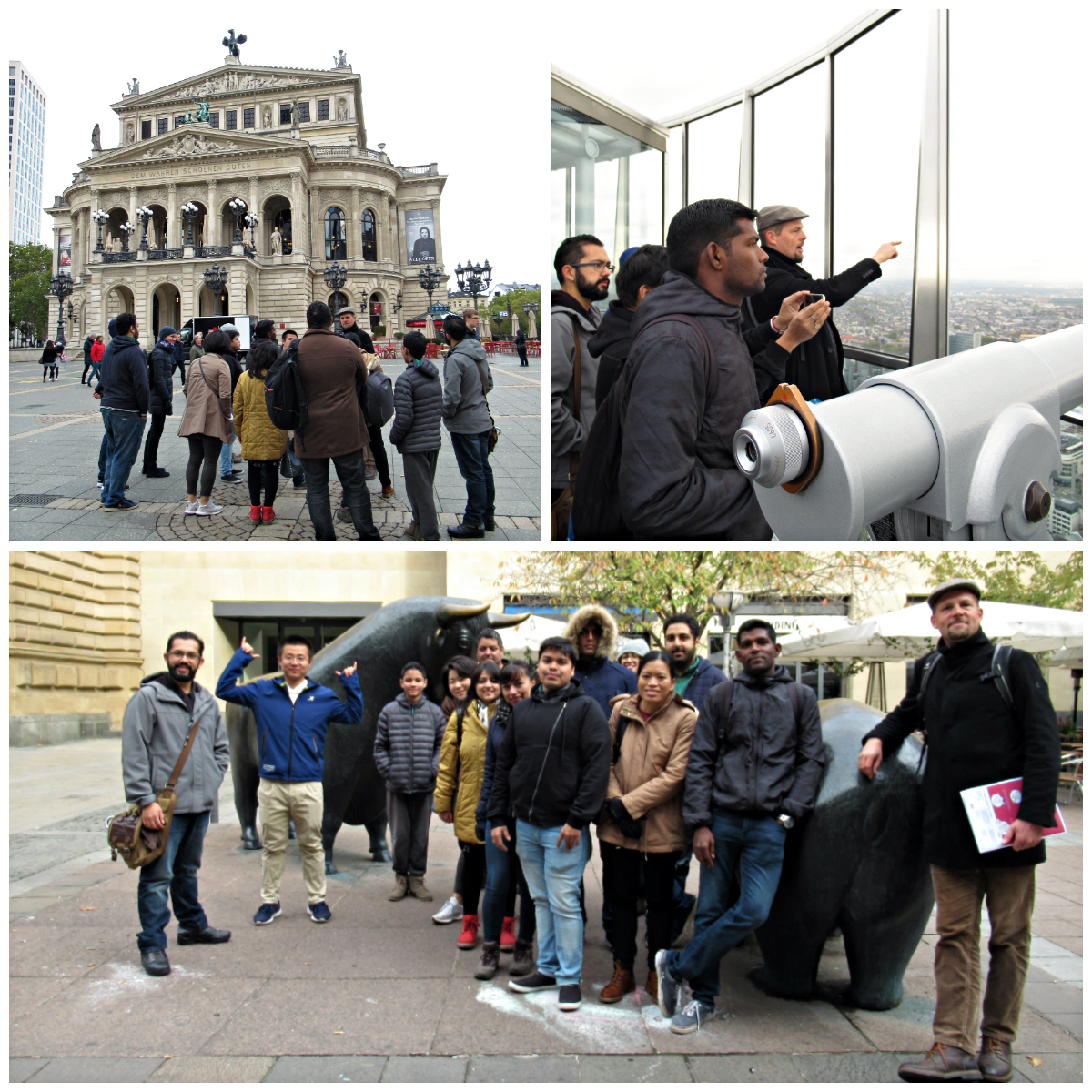 On Saturday, 27th of October, the GWC took a group of international newcomers of Goethe University to some of the most important historical sights of Frankfurt. Starting at the Main Tower where we enjoyed the beautiful view over Frankfurt we explored the historical down-town of Frankfurt. More than 1000 years of history including coronations of emperors, Germany‘s freely elected parliament and an outstanding trading history make Frankfurt a very special place to be. Finally we finished our tour with a traditional Hessian lunch at “Dauth-Schneider”, a typical Frankfurter Apfelweingaststätte in Sachsenhausen. 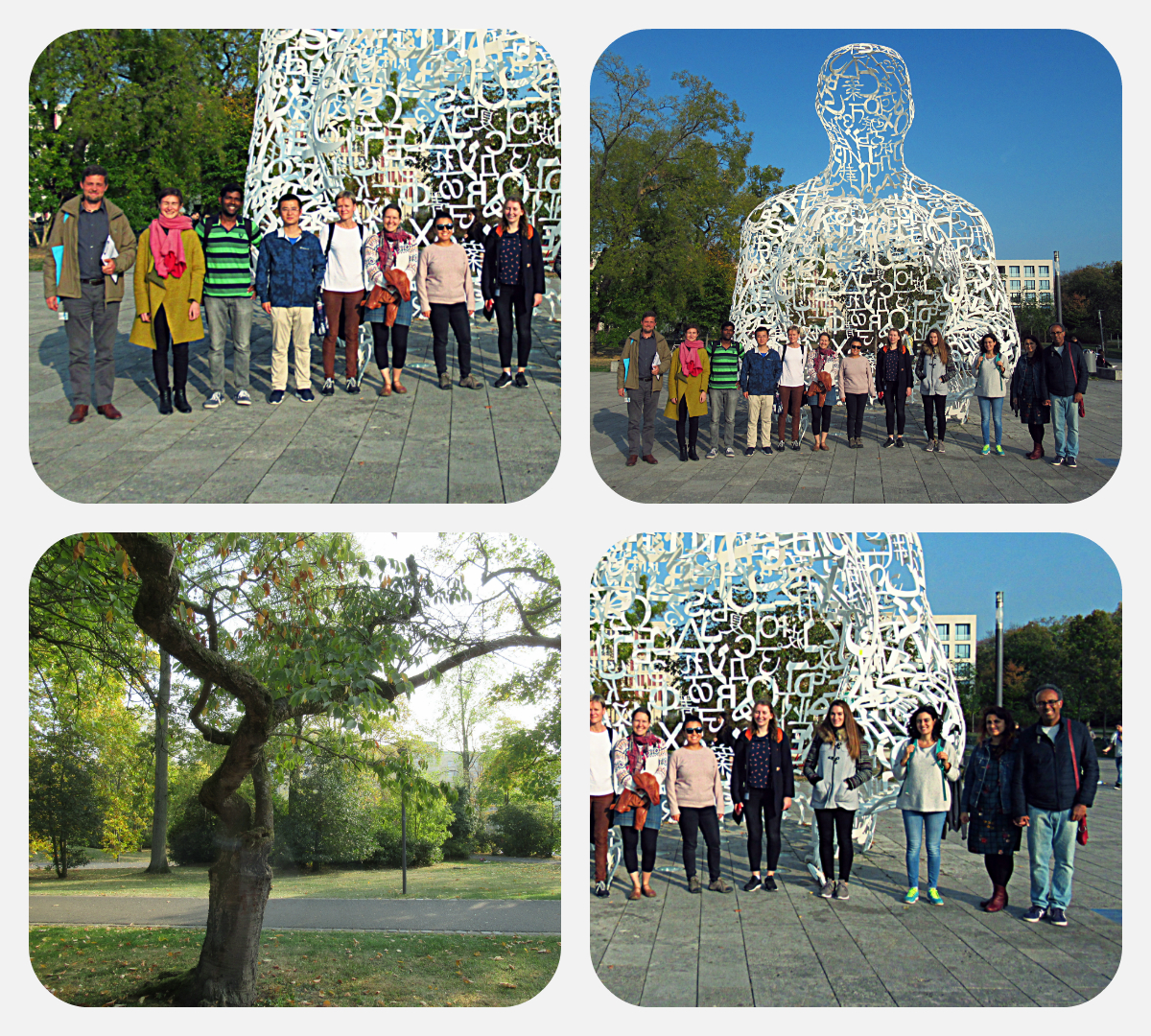 On Thursday, 18.10.2018 the Goethe Welcome Centre invited to a guided historical tour of roughly two hours across our beautiful Westend Campus. Mr. von Bothmer led a group of international researchers from the Alzheimer monument to the IG-Farben-Building, built by the world‘s greatest chemical trust of its time. After extensive information about the role of IG-Farben during the Nazi regime and the use of the company’s main building as the headquarter of the US Army the group paid a visit to the Norbert-Wollheim-Memorial. We continued to the multireligious Haus der Stille and after a stopover at the Adorno monument we ended our tour with a visit to the historical underground structures inside the library for Social Sciences and Psychology. 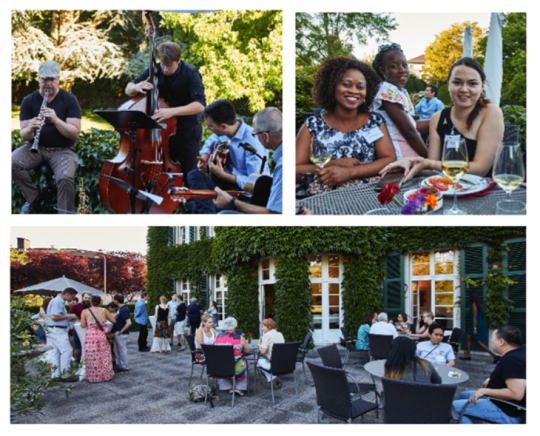 On Saturday, 30th June 2018, the Goethe Welcome Centre together with the foundation „Stiftung zur Förderung der internationalen wissenschaftlichen Beziehungen“ invited all international researchers at Goethe University to the great annual Summer Garden Party in the garden of GU‘s guesthouse Ditmarstraße 4. More than 70 members of GU’s international community gathered to celebrate the end of the summer term 2018 together with their family members, some of their academic hosts and participants of the GWC host programme. A delicious potluck buffet of national dishes prepared by participants and live music by the Frankfurt Sinti Swing Quartet "Gare du Jazz" created an exuberant atmosphere and made this event such a great success. 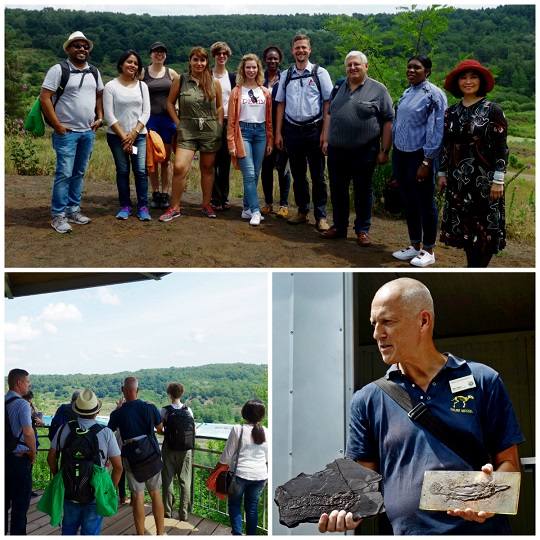 On Saturday, 16th June, the GWC took a group of international researchers to a trip to the UNESCO world heritage Messel Pit Fossil Site. On a beautiful sunny afternoon we had a guided tour around the pit and were introduced into its impressive history. We received comprehensive information on the early evolution of mammals as well as the developmental history of our planet. Especially fascinating were the world heritage’s unique fossils from the Eocene dating back 50 million years. After our tour, we had a lunch at the museum’s cafeteria and a plenty of time to explore the excellent museum on site.

Not in a sedan chair nor in a carriage, but by train and bus we travelled to the beautiful medieval hill castle of Ronneburg. There we spent an adventurous day, watching heroic knights and not less heroic and combative ladies on horseback, fighting breathtaking, daring battles. We spent the time listening to medieval musicians, admiring subtle jugglers, bying things at fancy market stalls and hanging on to wise prophetesses. A part of the group visited the falconry and saw an amazing bird flight show. We refreshed ourselves with not-everyday beverages as apple beer and honeyed wine (mead/Met) and delicious food as “Stockbrot”. Besides, we had the chance to marvel at the incredibly deep well in the castle, to admire the architecture and feel the spirit of the old building. For sure, we will return to this place!

Frankfurt by Night: May, 4th

On a pleasant spring night we shared a few bembels, the traditional Hessian jug for serving apple cider, in the cozy inn "Buchwald" and ate typical Frankfurt dishes. In high spirits and after long and lively chatter we went for another round of refreshing beverages on the famous Bergerstraße. Everybody got into conversation with one another and it was a beautiful night. 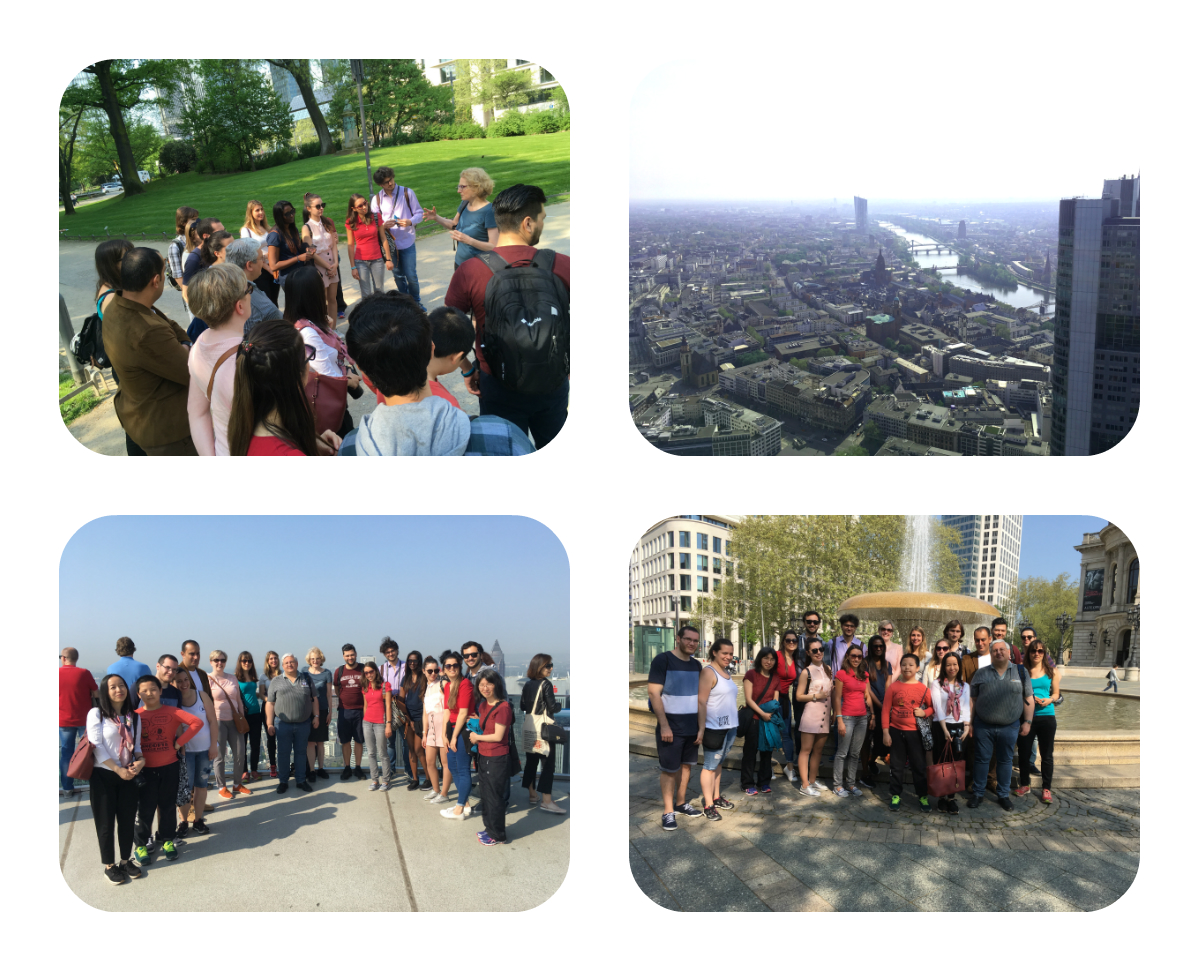 We went on a guided city tour around the historical down-town of Frankfurt. More than 1000 years of history including coronations of emperors, Germany‘s freely elected parliament and an outstanding trading history make Frankfurt a very special place to be. We visited the Main tower and enjoyed the beautiful view over Frankfurt, the Paulskirche, home of the first Frankfurt Parliament (Frankfurt National Assembly) and several other locations, such as the Frankfurt Stock Exchange. After the tour we ended the afternoon in the relaxed atmosphere of a traditional Hessian restaurant. 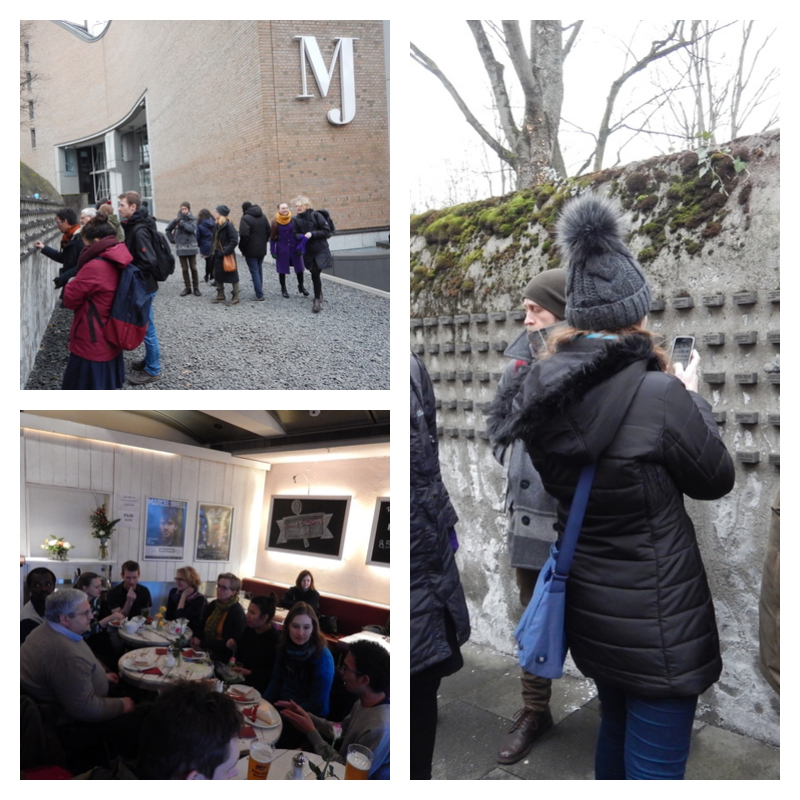 On Saturday, 17th February, the GWC organized a visit to the Museum Judengasse in Frankfurt. The museum offers an insight to one of the most important cultural centres of Jewish life of its time in Europe. On a guided tour we learned about the emergence of the first Jewish ghetto in Europe, how its inhabitants lived there and how they were treated by the Christian majority. Also we learned of the political struggles to preserve even parts of the remains of the ghetto Judengasse and to build this museum. You may say that the museum itself is a part of the history of Jewish remembrance.

Since it was Shabbat, we couldn't visit the old Jewish Cemetery on Battonnstraße, the second oldest Jewish cemetery in Germany. Instead we explored its surrounding wall which has the names of all known Jewish citizens of Frankfurt on it in remembrance of there suffering during the Shoah. 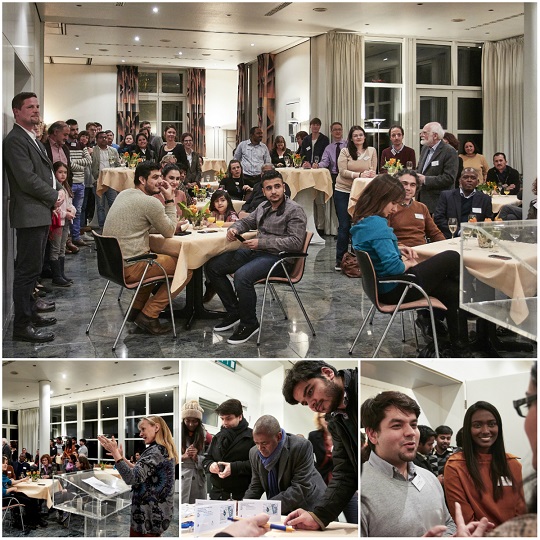 After a small reception with sparkling wine, GU’s President Prof. Birgitta Wolff looked back at the year 2017 and gave an outlook on 2018. She emphasized the relevance of international guests for the excellent research taking place at GU and highlighted GWC’s non-academic advisory service for international researchers. Prof. Bereiter-Hahn, former Vice President for Internationalization and chairman of the foundation, introduced the foundation and gave a short outline of its history.

Afterwards, the guests enjoyed the evening with a buffet and conversations.