Fluctuation spectroscopy measurements of quasi-two-dimensional organic charge-transfer salts (BEDT-TTF)2X are reviewed. In the past decade, the method has served as a new approach for studying the low-frequency dynamics of strongly correlated charge carriers in these materials. We review some basic aspects of electronic fluctuations in solids, and give an overview of selected problems where the analysis of 1/f-type fluctuations and the corresponding slow dynamics provide a better understanding of the underlying physics. These examples are related to (1) an inhomogeneous current distribution due to phase separation and/or a percolative transition; (2) slow dynamics due to a glassy freezing either of structural degrees of freedom coupling to the electronic properties or (3) of the electrons themselves, e.g., when residing on a highly-frustrated crystal lattice, where slow and heterogeneous dynamics are key experimental properties for the vitrification process of a supercooled charge-liquid. Another example is (4), the near divergence and critical slowing down of charge carrier fluctuations at the finite-temperature critical endpoint of the Mott metal-insulator transition. Here also indications for a glassy freezing and temporal and spatial correlated dynamics are found. Mapping out the region of ergodicity breaking and understanding the influence of disorder on the temporal and spatial correlated fluctuations will be an important realm of future studies, as well as the fluctuation properties deep in the Mott or charge-ordered insulating states providing a connection to relaxor or ordered ferroelectric states studied by dielectric spectroscopy.

By the fabrication of periodically arranged nanomagnetic systems it is possible to engineer novel physical properties by realizing artificial lattice geometries that are not accessible via natural crystallization or chemical synthesis. This has been accomplished with great success in two dimensions in the fields of artificial spin ice and magnetic logic devices, to name just two. Although first proposals have been made to advance into three dimensions (3D), established nanofabrication pathways based on electron beam lithography have not been adapted to obtain free-form 3D nanostructures. Here we demonstrate the direct-write fabrication of freestanding ferromagnetic 3D nano-architectures. By employing micro-Hall sensing, we have determined the magnetic stray field generated by our free-form structures in an externally applied magnetic field and we have performed micromagnetic and macro-spin simulations to deduce the spatial magnetization profiles in the structures and analyze their switching behavior. Furthermore we show that the magnetic 3D elements can be combined with other 3D elements of different chemical composition and intrinsic material properties.

Evidence for ferromagnetic clusters in the Colossal-Magnetoresistance material EuB6

We combined scanning tunneling microscopy and locally resolved magnetic stray field measurements on the ferromagnetic semimetal EuB6, which exhibits a complex ferromagnetic order and a colossal magnetoresistance effect. In a zero magnetic field, scanning tunneling spectroscopy visualizes the existence of local inhomogeneities in the electronic density of states, which we interpret as the localization of charge carriers due to the formation of magnetic polarons. Micro-Hall magnetometry measurements of the total stray field emanating from the end of a rectangular-shaped platelike sample reveals evidence for magnetic clusters also in finite magnetic fields. In contrast, the signal detected below the faces of the magnetized sample measures a local stray field indicating the formation of pronounced magnetic inhomogeneities consistent with large clusters of percolated magnetic polarons.

We present systematic temperature-dependent resistance noise measurements on a series of ferromagnetic (Ga,Mn)As epitaxial thin films covering a large parameter space in terms of the Mn content x and other variations regarding sample fabrication. We infer that the electronic noise is dominated by switching processes related to impurities in the entire temperature range. While metallic compounds with x > 2 % do not exhibit any significant change in the low-frequency resistance noise around the Curie temperature, we find indications for an electronic phase separation in films with x < 2 % in the vicinity of TC, manifesting itself in a maximum in the noise power spectral density. These results are compared with noise measurements on an insulating (Ga,Mn)P reference sample, for which the evidence for an electronic phase separation is even stronger and a possible percolation of bound magnetic polarons is discussed. Another aspect addressed in this work is the effect of ion-irradiation-induced disorder on the electronic properties of (Ga,Mn)As films and, in particular, whether any electronic inhomogeneities can be observed in this case. Finally, we put our findings into the context of the ongoing debate on the electronic structure and the development of spontaneous magnetization in these materials.
Investigation of a possible electronic phase separation in the magnetic semiconductors (Ga,Mn)As and (Ga,Mn)P by means of fluctuation spectroscopy, Phys. Rev. B 97, 054413 (2018)
Charge carrier dynamics in (Ga,Mn)As studied by resistance noise spectroscopy, Acta Physica Polonica A 133, 520 (2018)

We have studied the low-frequency dynamics of the charge carriers in different organic chargetransfer salts κ-(BEDT-TTF)2X with polymeric anions X by using resistance noise spectroscopy. Our aim is to investigate the structural, glass-like transition caused by the conformational degrees of freedom of the BEDT-TTF molecules’ terminal ethylene groups. Although of fundamental importance for studies of the electronic ground-state properties, the phenomenology of the glassy dynamics has been minimally investigated and its origin is not understood. Our systematic studies of fluctuation spectroscopy of various different compounds reveal a universal, pronounced maximum in the resistance noise power spectral density related to the glass transition. The energy scale of this process can be identified with the activation energy of the glass-like ethylene endgroup structural dynamics as determined from thermodynamic andNMRmeasurements. For the first time for this class of ‘plastic crystals’,we report a typical glassy property of the relaxation time, namely a Vogel–Fulcher–Tammann law, and are able to determine the degree of fragility of the glassy system. Supporting ab initio calculations provide an explanation for the origin and phenomenology of the glassy dynamics in different systems in terms of a simple two-level model, where the relevant energy scales are determined by the coupling of the ethylene endgroups to the anions. 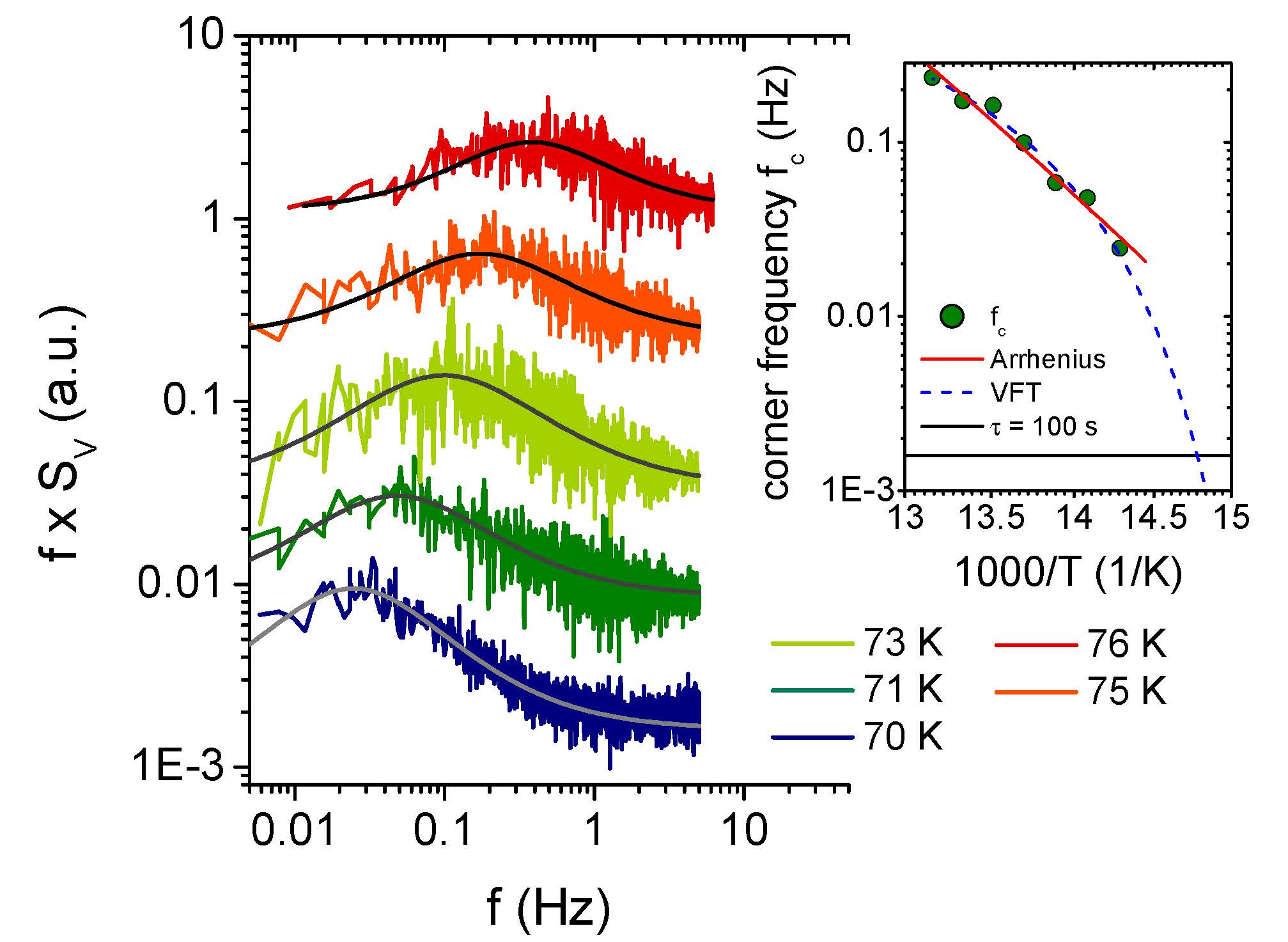 Lorentzian spectra indicating two-level fluctuations in the vicinity of the glass-like structural ordering of the BEDT-TTF molecules' terminal ethylene groups.

We present measurements of the thermal dynamics of a Co-based single building block of an artificial square spin ice fabricated by focused electron-beam-induced deposition (FEBID). We employ micro-Hall magnetometry, an ultra-sensitive tool to study the stray field emanating from magnetic nanostructures, as a new technique to access the dynamical properties during the magnetization reversal of the spin-ice nanocluster. The obtained hysteresis loop exhibits distinct steps, displaying a reduction of their "coercive field" with increasing temperature. Therefore, thermally unstable states could be repetitively prepared by relatively simple temperature and field protocols allowing one to investigate the statistics of their switching behavior within experimentally accessible timescales. For a selected switching event, we find a strong reduction of the so-prepared states' "survival time" with increasing temperature and magnetic field. Besides the possibility to control the lifetime of selected switching events at will, we find evidence for a more complex behavior caused by the special spin ice arrangement of the macrospins, i.e., that the magnetic reversal statistically follows distinct “paths” most likely driven by thermal perturbation. 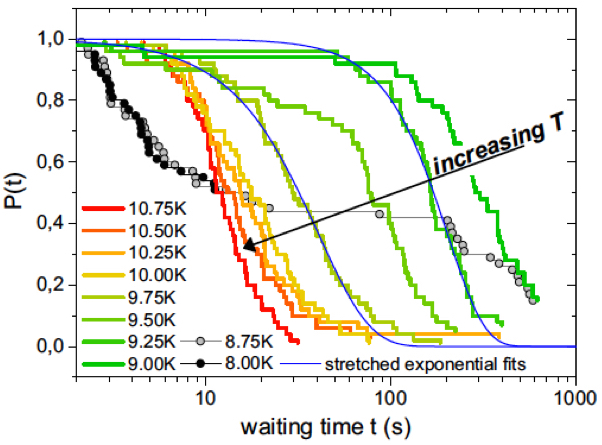 We compare the results of an individual building block (nanocluster) of interacting elements in artificial square spin ice with the switching of a single nanoisland. By analyzing the survival function of the repeatedly prepared state in a given temperature range, we find thermally activated switching dynamics. A detailed analysis of the hysteresis loop reveals a metastable microstate preceding the overall magnetization reversal of the single nanoelement, also found in micromagnetic simulations. Such internal degrees of freedom may need to be considered, when analyzing the thermal dynamics of larger spin ice configurations on different lattice types.

We report on the dramatic slowing down of the charge carrier dynamics in a quasi-two-dimensional organic conductor, which can be reversibly tuned through the Mott metal-insulator transition (MIT). At the finite-temperature critical end point, we observe a divergent increase of the resistance fluctuations accompanied by a drastic shift of spectral weight to low frequencies, demonstrating the critical slowing down of the order parameter (doublon density) fluctuations. The slow dynamics is accompanied by non-Gaussian fluctuations, indicative of correlated charge carrier dynamics. A possible explanation is a glassy freezing of the electronic system as a precursor of the Mott MIT. 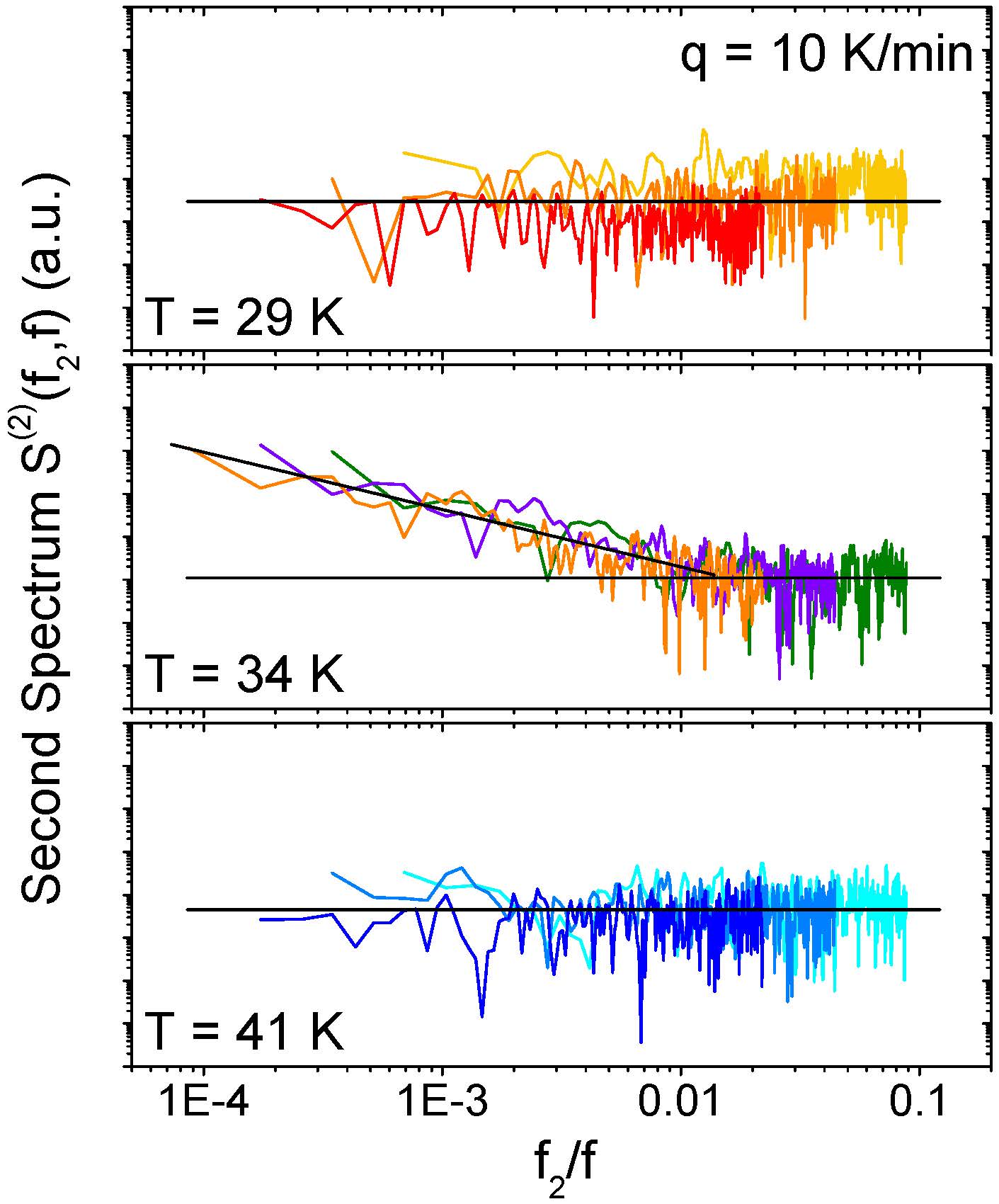 So-called second noise spectra provide evidence for non-Gaussian fluctuations at the second-order critical endpoint of the first-order Mott metal-insulator transition. A possible explanation is glassy dynamics of the correlated electrons, where our results indicate a picture, where the system wanders collectively between metastable states related by a kinetic hierarchy.

Spin charge lattice coupling and the CMR effect in EuB6

The coupling of magnetic and electronic degrees of freedom to the crystal lattice in the ferromagnetic semimetal EuB6, which exhibits a complex ferromagnetic order and a colossal magnetoresistance effect, is studied by high-resolution thermal expansion and magnetostriction experiments. EuB6 may be viewed as a model system, where pure magnetism-tuned transport and the response of the crystal lattice can be studied in a comparatively simple environment, i.e., not influenced by strong crystal-electric field effects and Jahn-Teller distortions.We find a very large lattice response, quantified by (i) the magnetic Grüneisen parameter, (ii) the spontaneous strain when entering the ferromagnetic region, and (iii) the magnetostriction in the paramagnetic temperature regime. Our analysis reveals that a significant part of the lattice effects originates in the magnetically driven delocalization of charge carriers, consistent with the scenario of percolating magnetic polarons. A strong effect of the formation and dynamics of local magnetic clusters on the lattice parameters is suggested to be a general feature of colossal magnetoresistance materials. 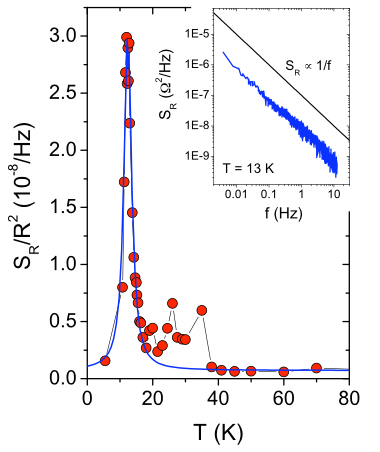 Combined measurements of fluctuation spectroscopy and weak nonlinear transport of the semimetallic ferromagnet EuB6 reveal unambiguous evidence for magnetically driven electronic phase separation consistent with the picture of percolation of magnetic polarons (MP), which form highly conducting magnetically ordered clusters in a paramagnetic and “poorly conducting” background. These different parts of the conducting network are probed separately by the noise spectroscopy/nonlinear transport and the conventional linear resistivity. We suggest a comprehensive and “universal” scenario for theMPpercolation, which occurs at a critical magnetization either induced by ferromagnetic order at zero field or externally appliedmagnetic fields in the paramagnetic region.

Multiferroicity in an organic charge-transfer salt

Multiferroicity in an organic charge-transfer salt that is suggestive of electric-dipoledriven magnetism, Nature Materials 11, 755 (2012) 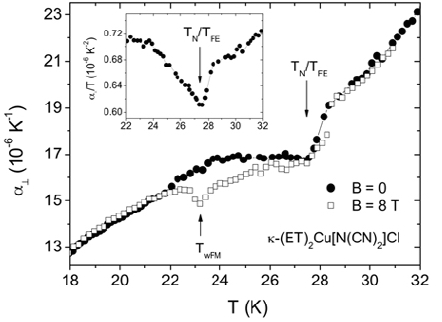 The proposed multiferroic state of the organic charge-transfer salt k-(ET)2Cu[N(CN)2]Cl has been studied by dc conductivity, magnetic susceptibility and measurements of the dielectric constant in various differently prepared single crystals. In the majority of crystals, we confirm the existence of an order-disorder-type ferroelectric state, which coincides with
antiferromagnetic order. This phenomenology rules out scenarios which consider an inhomogeneous, short-range ordered ferroelectric state. Measurements of the dielectric constant and the magnetic susceptibility on the same crystals reveal that both transitions lie very close to each other or even collapse, indicating that both types of order are intimately coupled to each other. We address issues of the frequency dependence of the dielectric constant epsilon' and the dielectric loss epsilon'' and discuss sample-to-sample variations.