For registration, please send an email to: muenscher@soz.uni-frankfurt.de

For registration, please send an email to: muenscher@soz.uni-frankfurt.de

See conference report in the online magazine of Goethe University:

Wednesday, December 15, 2016, 4:00 - 6.00 pm, University of Zurich, Room RAA E-29, Rämistr. 59, 8001 Zurich
In collaboration with the Institute of Asian and Oriantal Studies - Japanese Studies of the University of Zurich
Moe Honjo, Hitotsubashi University, Tokyo (visiting scholar within the project)
"Keys to Understanding Animal Law in Japan: An Analysis of the Most Protected and the Least Protected Animals"

Dr. Markus Heckel organized together with Dr. Ioan Trifu (Goethe University Frankfurt) a session on “Protecting the Weak: Social Justice and Well-Being in China and Japan” in the Network Q on “Asian Capitalism” organized by Tobias ten Brink, Sebastien Lechevalier, Boy Lüthje, and Cornelia Storz. “Protecting the Weak: Entangled processes of framing, mobilization and institutionalization in East Asia”, is a research project funded by the Volkswagen Foundation within its initiative "Key issues for Academia and Society". The session linked the topic of wellbeing with social justice. The concept of social justice is the object of rich and complex intellectual discourses about right and duties, which are directly put into question when confronted with concrete example of discrimination. Closely related to social justice, wellbeing encompasses a variety of concerns and challenges regarding the improvement of the conditions of human as well as non-human life. Both themes have become highly relevant in today’s political, social, and economic environments, yet remain mainly overlooked in the study of East Asian countries. Project members presenting in this session include Stefan Hüppe-Moon, Na Zou, Markus Heckel and Ioan Trifu.

Frankfurt, May 11 – 15, 2016
organized by the project team members Matthias Schumann and Elisa Hörhager

In the week from May 9 to May 15 the project “Protecting the Weak” organized a series of events about migrant workers and disaster victims in contemporary China to engage with the interested Frankfurt public.

Together with photographer Wolfgang Müller we staged the photo exhibition “Mingong. Auf der Suche nach dem Glück“ about migrant workers in China at the AusstellungsHalle in Sachsenhausen. The exhibition was based on the photos Wolfgang Müller took during several trips to China where he accompanied migrant workers in daily life and on travels back to their home provinces. His photos were published in 2012 in the form of a photo book. The exhibition was accompanied by an opening event and a panel discussion with Wolfgang Müller. At the opening, he gave insights into his approach and shared his experiences with the migrant workers. During the discussion, Wolfgang Müller and our project team members Ms. Na Zou discussed the social situation of migrant workers in contemporary China, the restrictions they face in urban centers, but also the recent changes in political discourse and social policy. The discussion was chaired by the scientific coordinator of our project, Matthias Schumann. The exhibition and the events were visited by many Frankfurt citizens, including a class of Chinese language students from the Schiller-Gymnasium.

On May 12, we had the chance to commemorate one of the most devastating earthquakes in modern history which happened in Sichuan, China, exactly the same day eight years ago. This was done through the rare screening of Chinese film director Zhandong MA’s award-winning documentary film “One Day in May” (Chinese with German subtitles) in the arthouse Cinema “Orfeos Erben” in Bockenheim. The film screening and the reception which preceded it was attended by more than 50 people. The varied audience of Frankfurt residents originating from China, Germany and beyond was visibly moved by the film and engaged in a lively discussion afterwards with the director and project team member Elisa Hörhager. The successes of this event led to a further screening of another film by Zhandong MA, “A’Pei”, at Goethe University during the following week.

The 2011 Fukushima Nuclear Accident constitutes a technological accident, a humanitarian disaster, and the largest civil liability case in legal history. In light of a recent nuclear renaissance, ambitious energy transitions, and aiming to identify concrete policy recommendations regarding the prevention, mitigation, and compensation of future accidents, this international workshop critically addresses the legal challenges and necessary policy lessons from Fukushima. It will be the first to cover all three legal dimensions of the disaster – in public, private, and criminal law – and will comprise contributions by international experts pioneering their fields, including the regulation of risk, crisis management, nuclear safety, disaster resilience, environmental and energy law, and dispute resolution for victims. Further contributions will treat recent developments in Japan, such as the first judgments awarding compensation for the death of evacuees by suicide and the criminal trial against TEPCO executives for negligent manslaughter.

A detailed conference report has been published in the Zeitschrift für Japanisches Recht / Journal of Japanese Law:
R. Effinowicz, Fukushima Five Years On – Legal Fallout in Japan, Lessons for the EU, in: ZJapanR / J.Japan.L. 42 (2016) 299–30, see http://www.zjapanr.de/index.php/zjapanr/article/view/1112.

Organized by Moritz Bälz, the Law section of the 16. Deutscher Japanologentag, which took place at the LMU in Munich from 26 to 28 August 2015, taking inspiration from the IZO research project “Protecting the Weak” met to discuss the topic “Law as enforcement of individual rights in Japan: Discourses and Applications”. The presentations focused on the question whether law in Japan is conceived and realized as enforcement of individual rights in a similar way as in continental-European or Common law jurisdictions. Following an introductory lecture “Subjektive Rechte in Japan. Politische Einforderung, gesetzgeberische Gewährung, prozessuale Durchsetzung. Ein Problemaufriss” by the convener, presenters from Germany and Japan shed light on this topic from the perspectives of various fields of law. Two members of the project team also had the opportunity to present there: Kazushige Doi: „Subjektive Rechte auch für Tiere? Zur Entwicklung des Tierschutzes in Japan“ and Julius F.W. Weitzdörfer: „Aggressive Rechtsdurchsetzung in Japan. Die illegale Eintreibung und legale Rückforderung wucherischer Darlehenszinsen“. The contributions will be published in 2017.

On June 6, 2015, the documentary “Little Voices from Fukushima (2015)” was shown in cooperation with the well-known Nippon Connection Japanese Film Festival in Frankfurt. Furthermore, we had the chance to invite film director Hitomi Kamanaka to discuss aspects of the film with the project team member Julius Weitzdörfer. The documentary deals with the nuclear disasters in Fukushima and Chernobyl. While visiting the affected regions in Japan and Belarus, film director Hitomi Kamanaka analyzes the parallels between the disaster of Fukushima and Chernobyl and gives a voice to the mothers and children, who engage, inform and try to protect their families. The impressive documentary and the discussion with the very committed film director Hitomi Kamanaka was embraced by the audience and therefore the film reached the second place of the Nippon Visions Audience Award Voting 2015.

This first international conference of the project "Entangled Processes of Framing, Mobilization and Institutionalization in East Asia" funded by the Volkswagen Foundation within its initiative “key issues for academia and society” was organized by the Interdisciplinary Centre for East Asian Studies (IZO) at Goethe University in collaboration with the Institute for Social Research (IfS). Corresponding to the interdisciplinary logic of the project, not only the principle investigators of the project, Iwo Amelung, Moritz Bälz, Heike Holbig, Cornelia Storz and their project team, but also the renowned conference speakers from Europe, Asia, USA and Australia comprised a variety of diverse disciplines like history, polical science, law, economics and cultural studies.

February 4, 2015:
Wednesday film:
Saving 10.000: Winning a war on Suicide in Japan (2012)
Documentary followed by a discussion with members of our "Protecting the Weak" team

January 14, 2015
Wednesday film:
China's Unnatural Disaster (2009)
Documentary followed by a discussion with members of our "Protecting the Weak" team

Kick-off workshop in Frankfurt a.M., 14-15 March 2014 with a first introduction of all four case studies 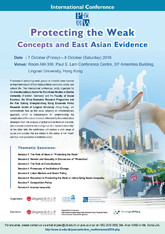 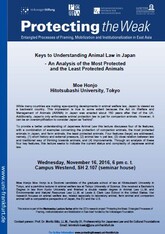 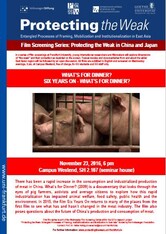