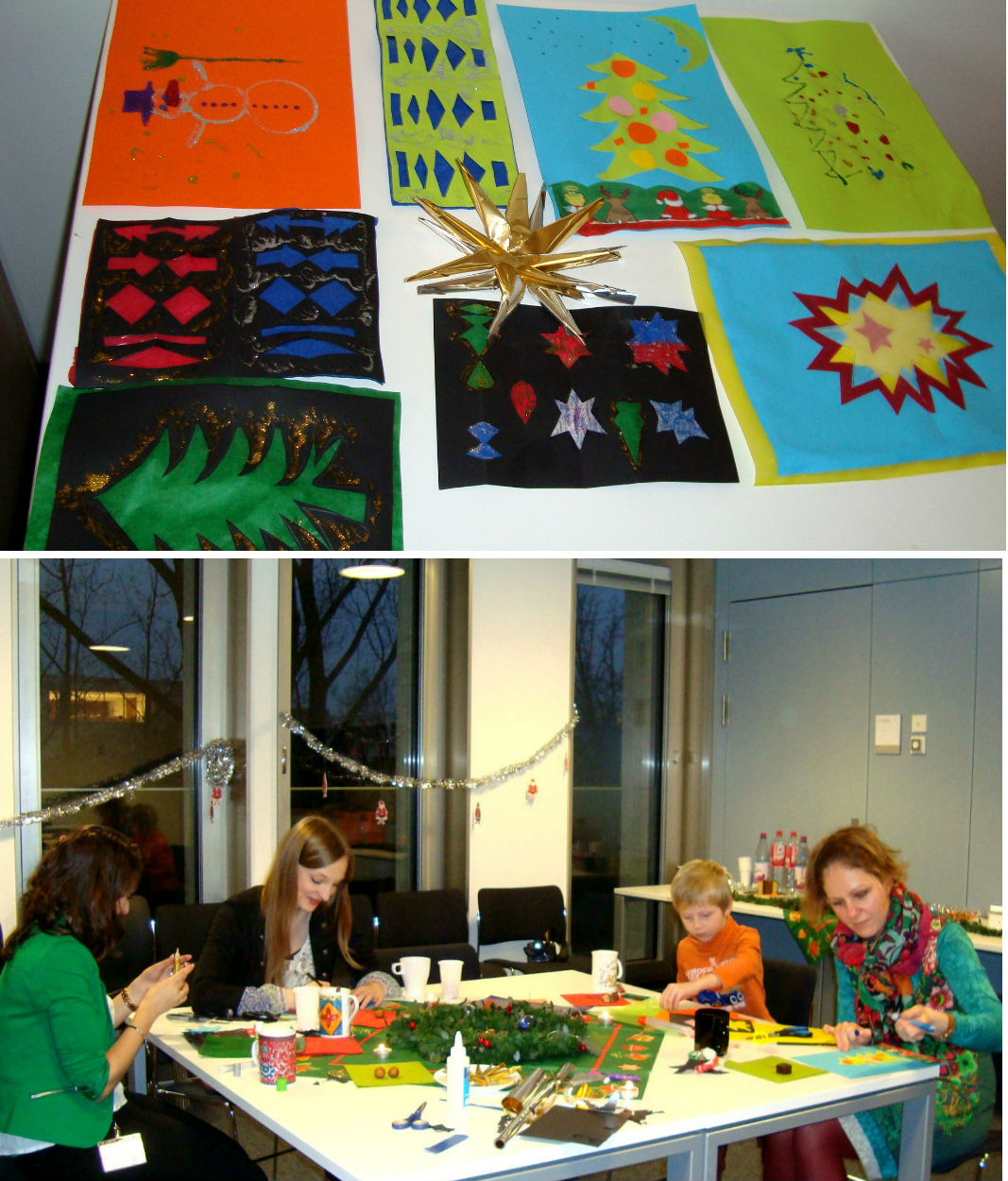 An activity especially designed for accompanying spouses of researchers and their children of all ages was organized by the GWC on Dec. 18th. The afternoon was spent with doing seasonal handicrafts, tasting some traditional German Advent and Christmas sweets and just getting to know each other. GWC’s senior researcher advisor Mrs. de Porras was there to answer your questions related to family, relocation and integration issues over a cup of tea or coffee.

Visit to the Christmas Market in Dreieichenhain 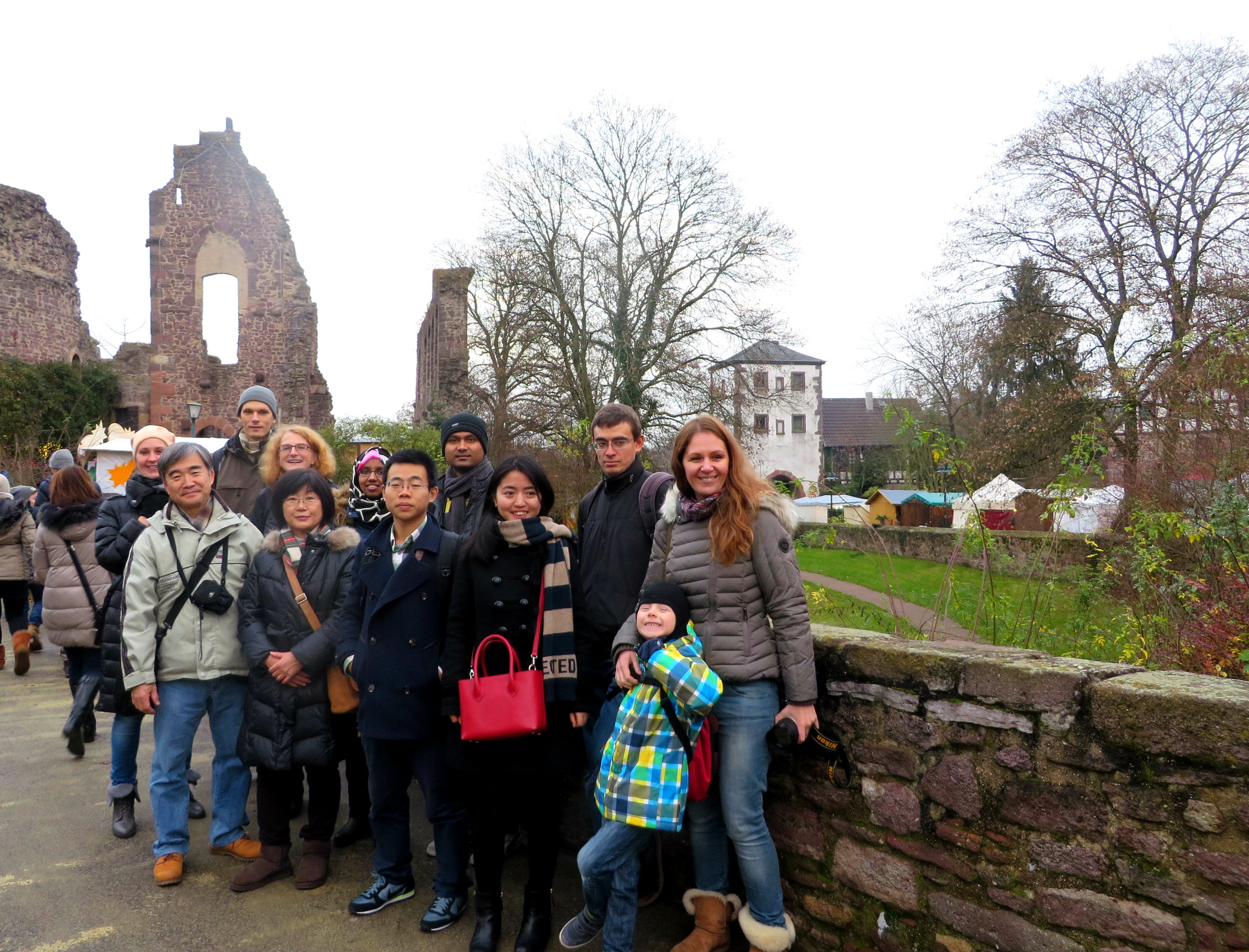 Crowded alleys and colorful stalls, gingerbread hearts and cold weather with very light snowfall, steaming hot mulled wine and beautiful local handcrafts: The Christmas market of Dreieichenhain, a small city south of Frankfurt with a rich history, is well worth a visit. We took an extensive walk through the town and its historical sights, among them the medieval castle and the old city walls, and shared hot mulled wine after we attended the official opening of the Christmas market with a children's orchestra. Afterwards everyone had the opportunity to explore the market, buying gifts and trying a variety of traditional foods and drinks. 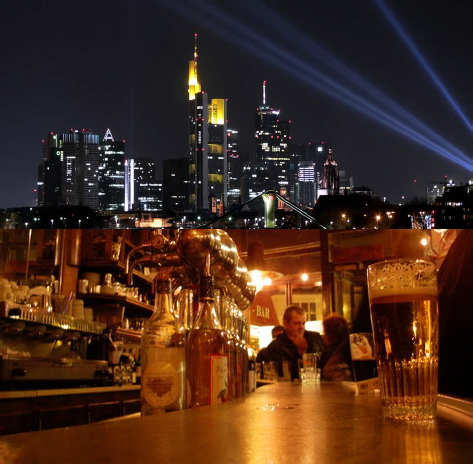 As another premiere GWC organized a pub crawl through Frankfurt’s neighborhood of Bockenheim. Together we explored a selection of the most typical cafes and bars of that district following the trails of famous academics and students around GU’s historical main campus.  On the one-place-one-drink-basis there was plenty of time to meet and discuss among international researchers at GU. GWC was especially happy to welcome several accompanying partners and spouses of international researchers on this event. 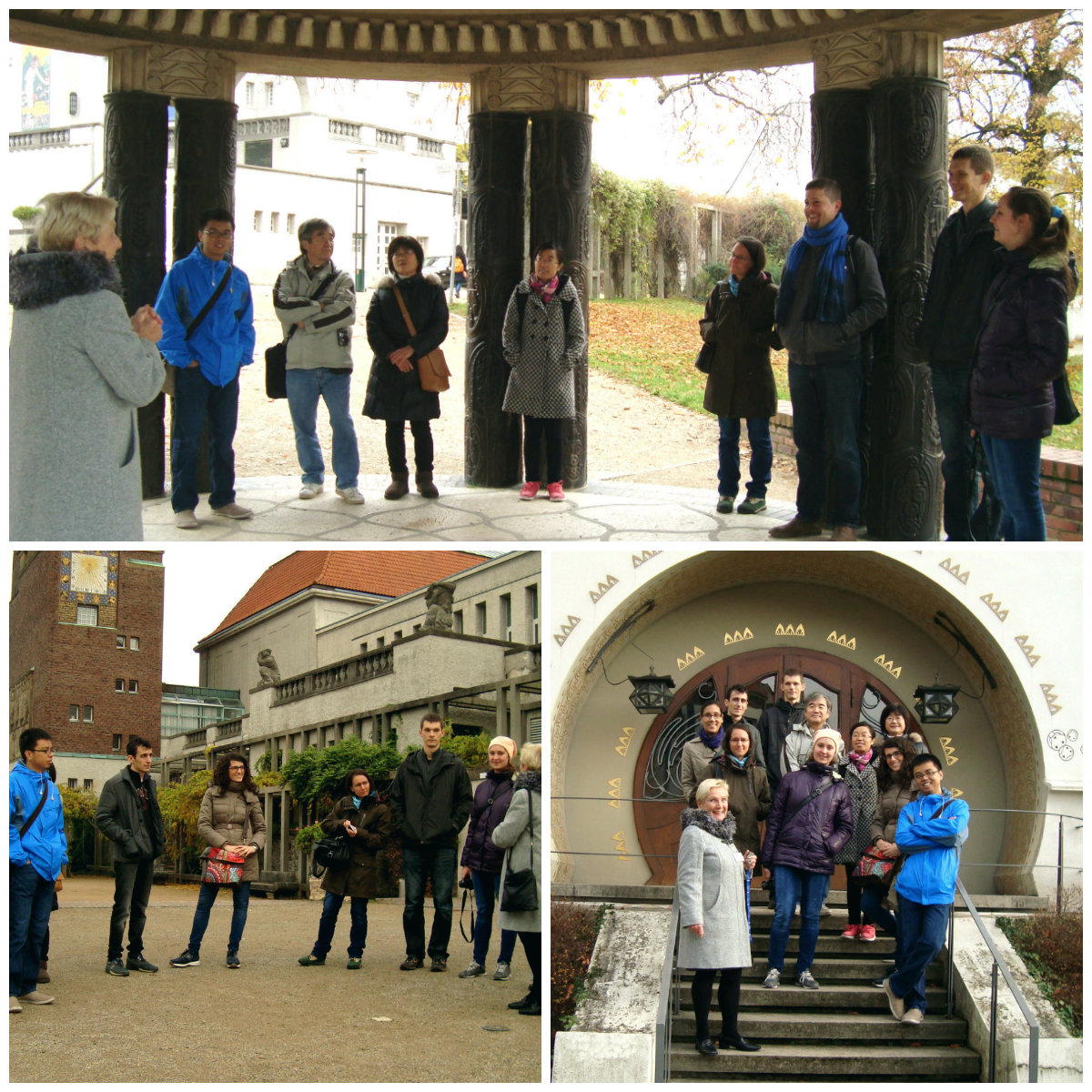 For the first time GWC could offer an excursion in cooperation with GU’s Dual Career Services. Together we explored Hessen‘s fourth biggest city starting with a professional guided tour around the unique Art Nouveau artist colony Mathildenhöhe. On this surprisingly sunny day we then proceeded by foot to the historical centre of the city and its renaissance castle. After a very tasty lunch at the Centralstation we visited the just newly renovated Hessisches Landesmuseum. Participants had plenty of free time to explore the various floors and exhibitions of this huge museum on their own before we continued to our last stop. The exhibition of Darmstadt’s Foto Club inside the White Tower showed us some photographic impressions of the historical Darmstadt before went back to Frankfurt by train. 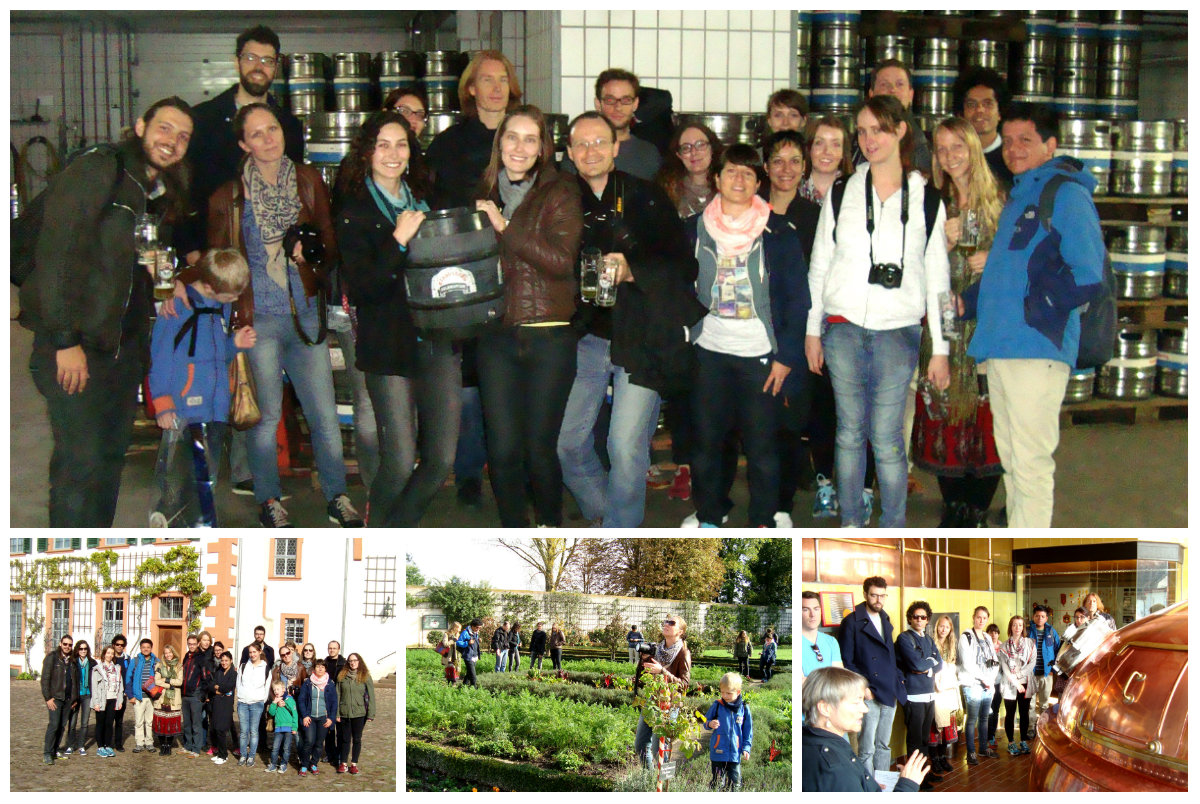 On a beautifully sunny October day the GWC excursion went by train to the cozy medieval town of Seligenstadt, situated on the banks of the river Main. Exploring the place by foot, we had a look at the historical town centre boasting some of the finest half timbered houses in Hessen. Next we visited the Carolingian Basilica, a monument of European significance. Following we went inside the very impressive baroque Benedictine monastery and strolled through the monastery’s magnificent botanical gardens. After a great lunch in a traditional restaurant we enjoyed the guided tour through the local Glaabsbräu brewery.  Without doubt participants learned a lot about Hessian history and the secrets of German beer production on this occasion. 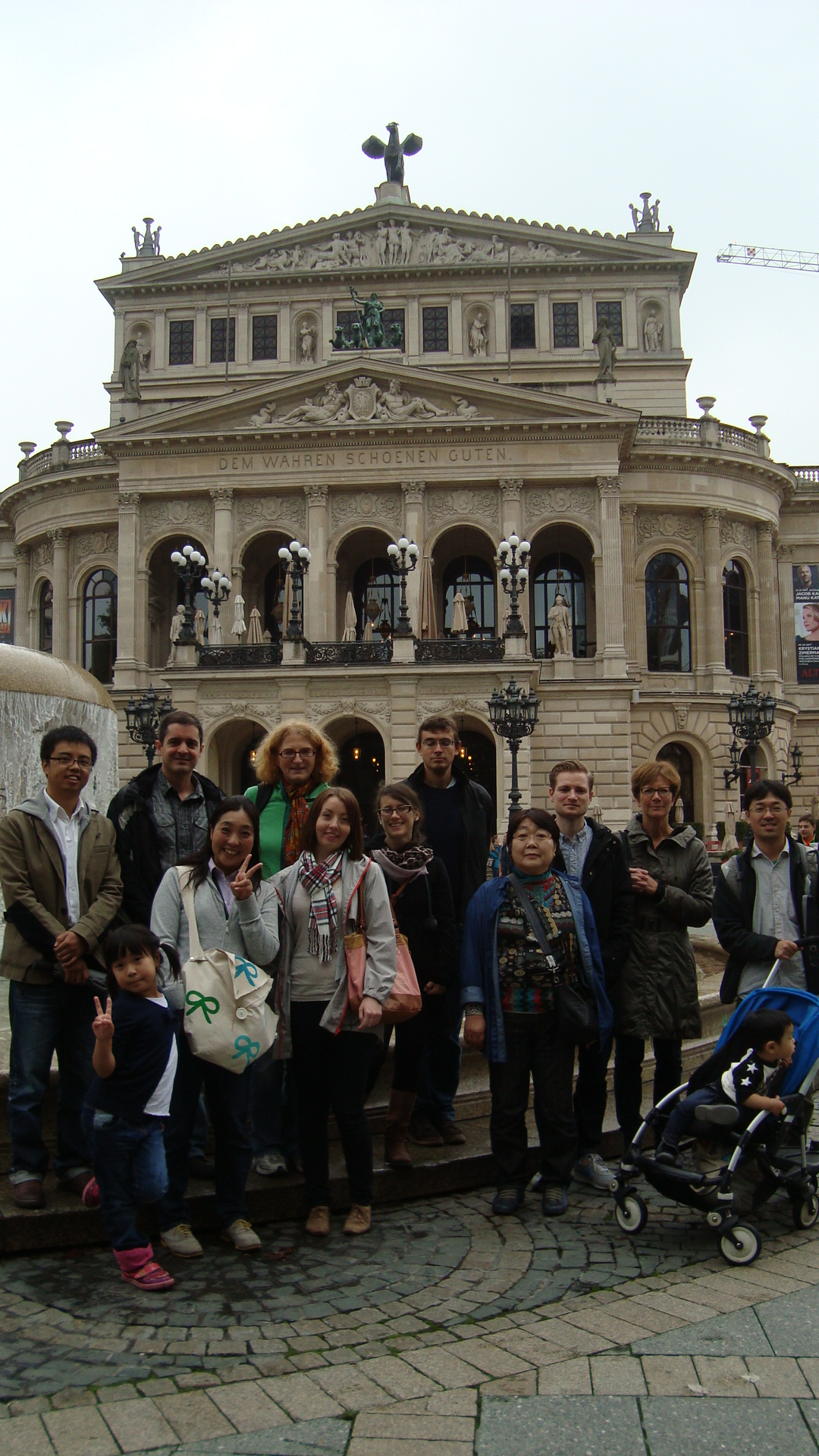 Our traditional city tour around the downtown of Frankfurt was this time guided by our senior researcher advisor, Gabriele Zinn, who took us to a variety of famous historical sights. The first stop was one of Frankfurt’s highest skyscrapers, the Main Tower, where we had a misty yet fantastic view over the city. Despite slightly rainy weather, we visited various spots such as the Goetheplatz, the old Stock Exchange, the Römer and Eiserner Steg, concluding the tour with Ebbelwei and a traditional Hessian lunch in Sachsenhausen. 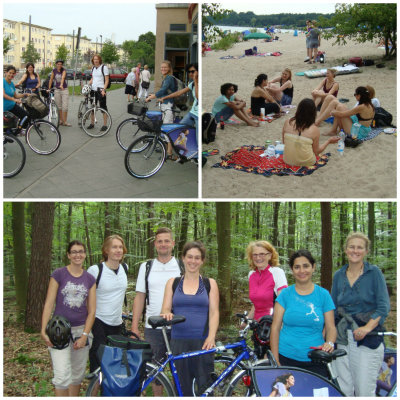 This term’s first bicycle tour for international researchers took southward of Frankfurt, to the Rodgau area. It led us through the "Stadtwald" in the direction of Langen. This easy trip of about 3 hours and roughly 40 km (20 km one way, no mountains) was suitable for beginners, too. It took us to the beautiful Lake of Langen (Langener Waldsee). There we went swimming and had picnic together. Lastly, we visited the zeppelin museum in Zeppelinheim. 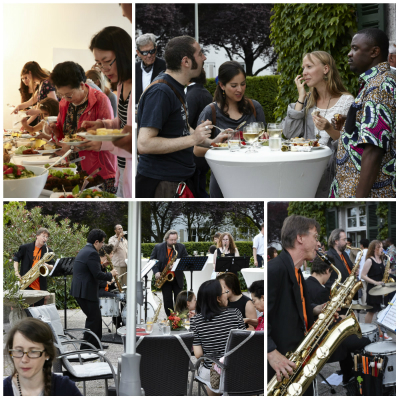 The Goethe Welcome Centre together with the “Stiftung zur Förderung der internationalen wissenschaftlichen Beziehungen” at Goethe University invited for a great Summer Garden Party on the terrace and garden of GU’s guest house Ditmarstraße. On July 12th, 2014 about 50 members of GU’s community of international researchers and some of their hosts gathered for this annual event accompanied by live music from the “Saxoholics2 and an astonishing pot-luck buffet of national dishes prepared by the participant. The party was opened with a word of welcome by Prof. Schmidt-Böcking (Director Stiftung zur Förderung der internationalen wissenschaftlichen Beziehungen) followed by Mr. Florian von Bothmer (Director GWC) and was blessed with some of the finest sunny weather.

Hiking Trip through the Taunus 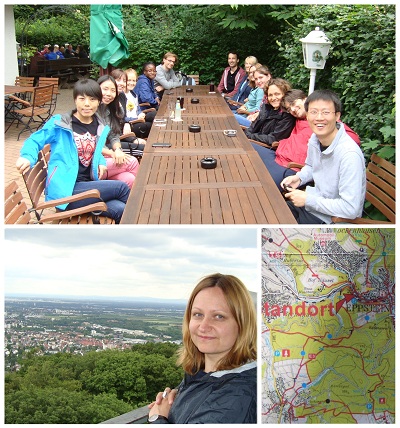 This hiking trip took us to the marvelous forest areas of the Taunus. We started at Eppstein and climbed uphills to the famous Kaisertempel. At the Waldgasthof Gundelhard we rested for lunch. Finally we had an excellent panorama from the tower Meisterturm, which is close to Hofheim. On our way to the train station we were lucky: There was a local festival going on in the town center, thus we had, additionally to the pleasant trip, an entertaining folkloristic end of our excursion.

On Friday 06.06.2014 at 3 p.m. the official opening of the Goethe Welcome Centre took place at the new premises of the GWC within the Biozentrum on Riedberg Campus. With speeches by the president of Goethe University, Prof. Werner Müller-Esterl, Mr. Pedro de Elejabeitia, Member of Board at Santander Consumer Bank AG and Dr. Martin Bickl, Head of International Office at GU, the second GWC office at GU was inaugurated. More than 40 guests from GU’s administration, faculties and institutes attended the event. The speeches were followed by a champagne reception accompanied by live Spanish guitar music by Walter Bareither. From now on the GWC will be able to offer its full scale relocation and welcome services for international researchers both on Westend and Riedberg Campus

For the first time GWC offered a joint visit to Frankfurt’s Opera to hear and see “Don Giovanni “ by Wolfgang A. Mozart. Being one of the most important Opera houses in the world, Frankfurt’s Opera has won the international title “Opera of the year” for three years in a row now. Our tickets had been sold out by February already. The three and a half hours of music and theater turned out to be a great pleasure for passionate Opera lovers as well as newcomers to the world of Opera.  The GWC will definitely offer another visit during the winter term. 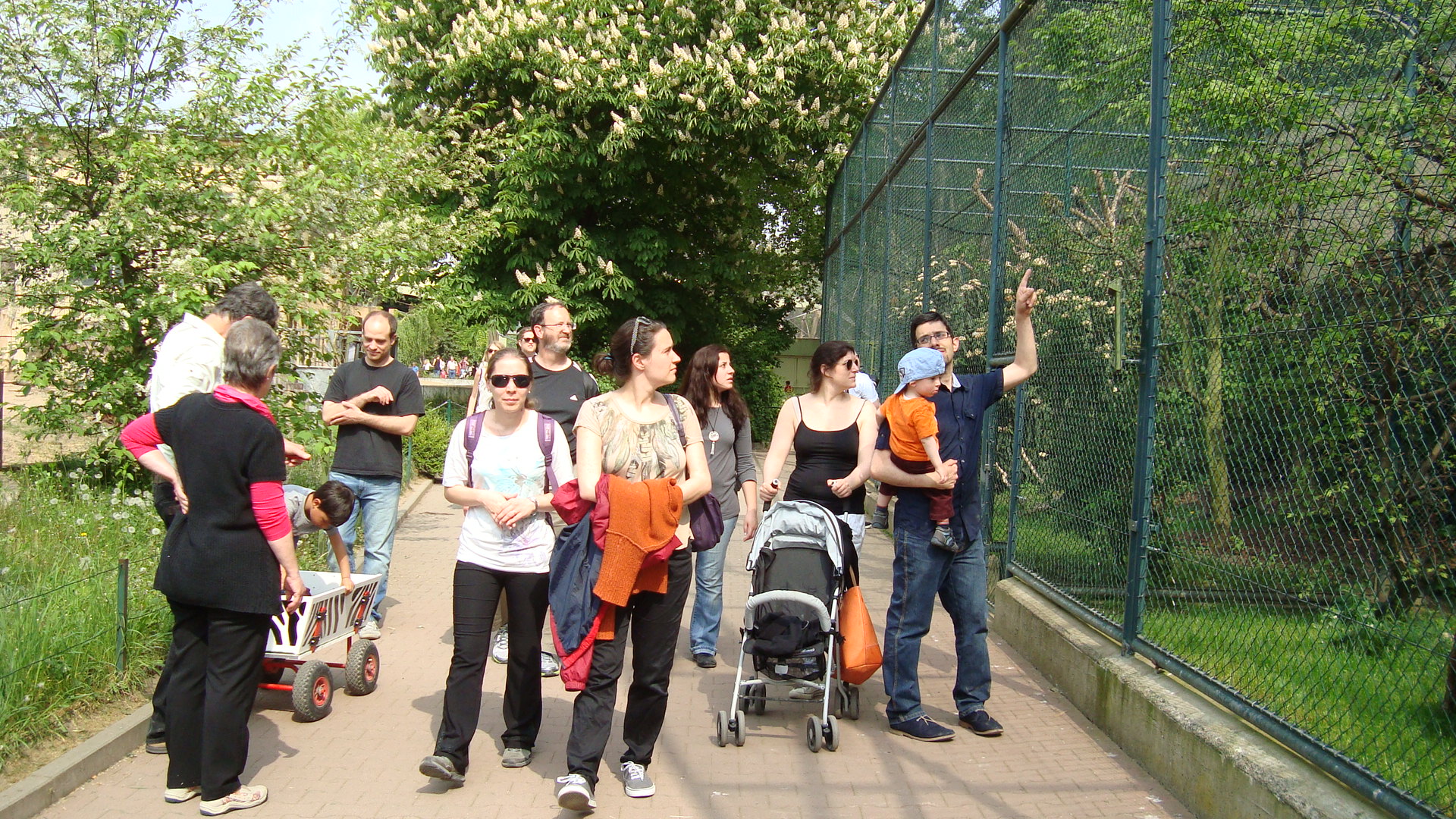 Shortly after the Easter holidays, the GWC invited GU’s international researchers and their families to a joint visit to Frankfurt’s Zoological Garden. Established in 1858, the Frankfurt Zoo is one of the oldest zoological gardens in the world. With great weather we enjoyed the beauty of the place and had a lot of time to get to know each other. After the visit to some of the more than 500 species present we had a rest enjoying delicious hot waffles. 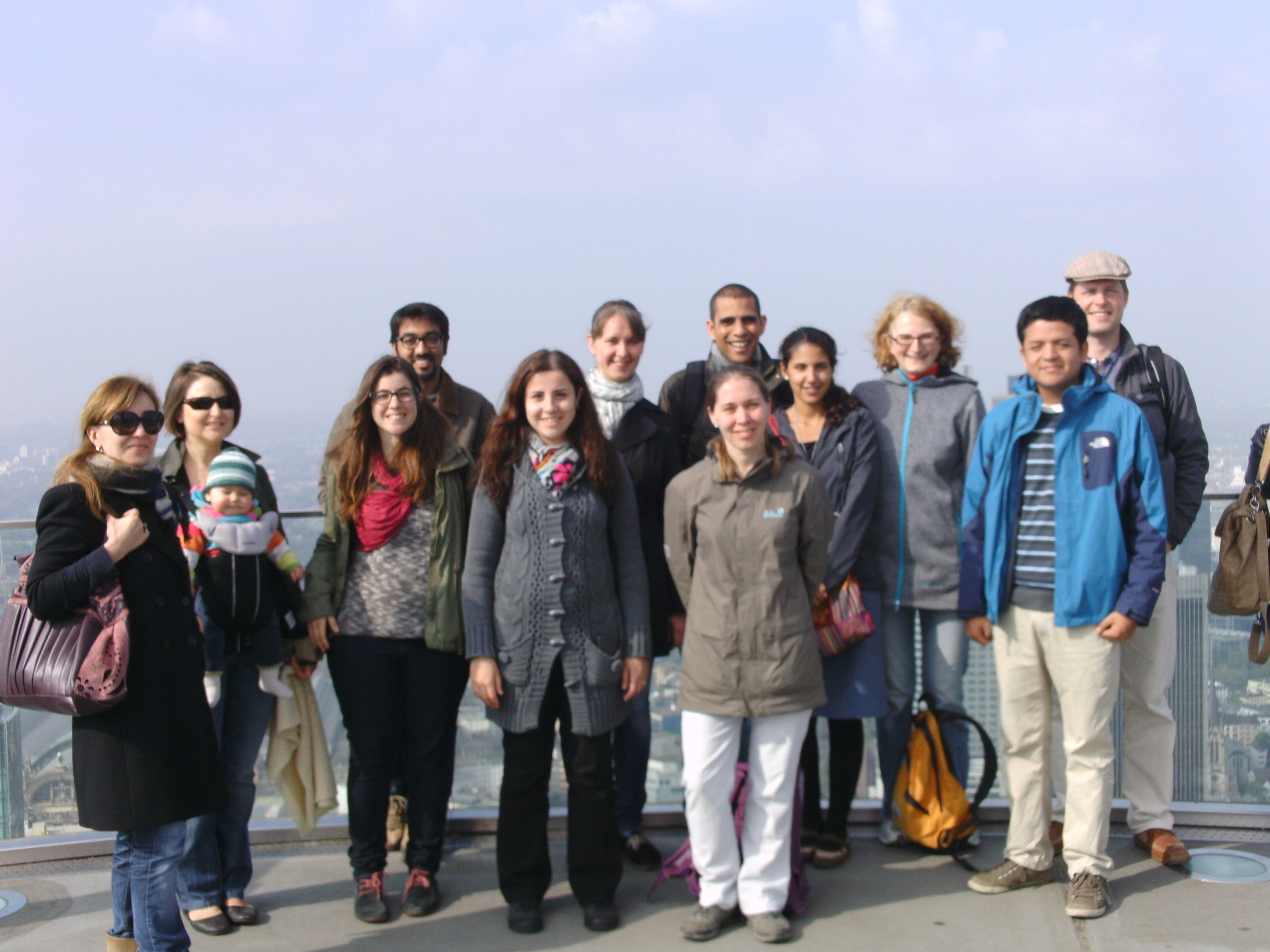 Already well established among GWC’s activities, the Guided City Tour at the start of each semester took the participants on a walking trip around the historical city centre of Frankfurt. For the first time the tour was guided by our new member of staff at GWC, Mrs. Gabriele Zinn. After visiting the Paulskirche, the Kaiserdom and the surrounding downtown area, we ended this tour once again in a famous Ebbelwoi tavern in Sachsenhausen with hefty Hessian dishes and a great pincher of the local cider.

Visit to the Palmengarten 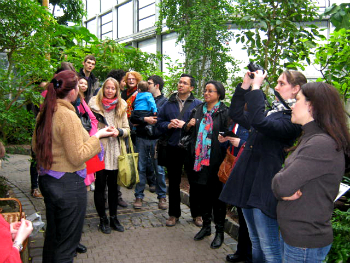 Within GWC’s activities for international researchers and their families we visited the beautiful botanical garden of Frankfurt called Palmengarten.  A guided tour focusing on tropical crops, spices and fruits took us through the different green houses and various climate zones. Tasting real cacao seeds, nibbling on cinnamon tree bark and chewing nutmeg flowers was great fun for young and old. Afterwards we went to see the special exhibition on orchids and then gathered for some superb coffee and cake at the very famous Café Siesmayer. It definitely was a great day in one of Frankfurt’s most popular places.

Visit to the Political Centre and Capital of Hessen 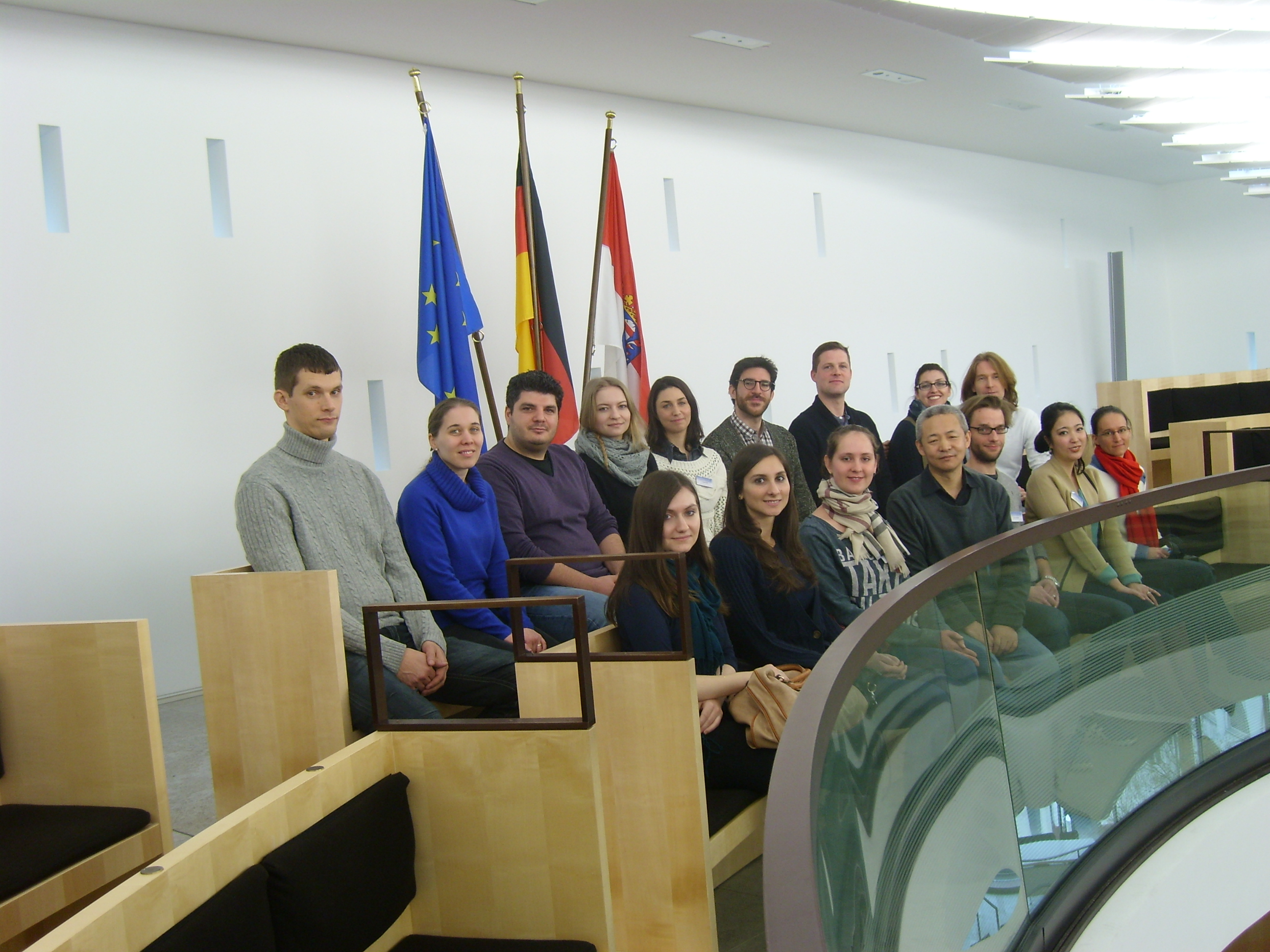 For the first excursion of 2014, the Goethe Welcome Centre took a group of international researchers to Wiesbaden, the capital of Hessen. A tour through the old city palace, which now serves as the seat of the state parliament, introduced the group not only to the history of Wiesbaden and the region, dating back to the Roman period, but also to the contemporary political system of Hessen. Despite the rainy weather, we visited a few of the charming historical sights of the city such as the famous Kurhaus of Wiesbaden after having lunch at a traditional German tavern. Finally the group completed the trip by visiting one of the three Hessian state museums, the museum Wiesbaden, which comprises an art collection, a natural history collection and a collection of Nassauian antiquities. 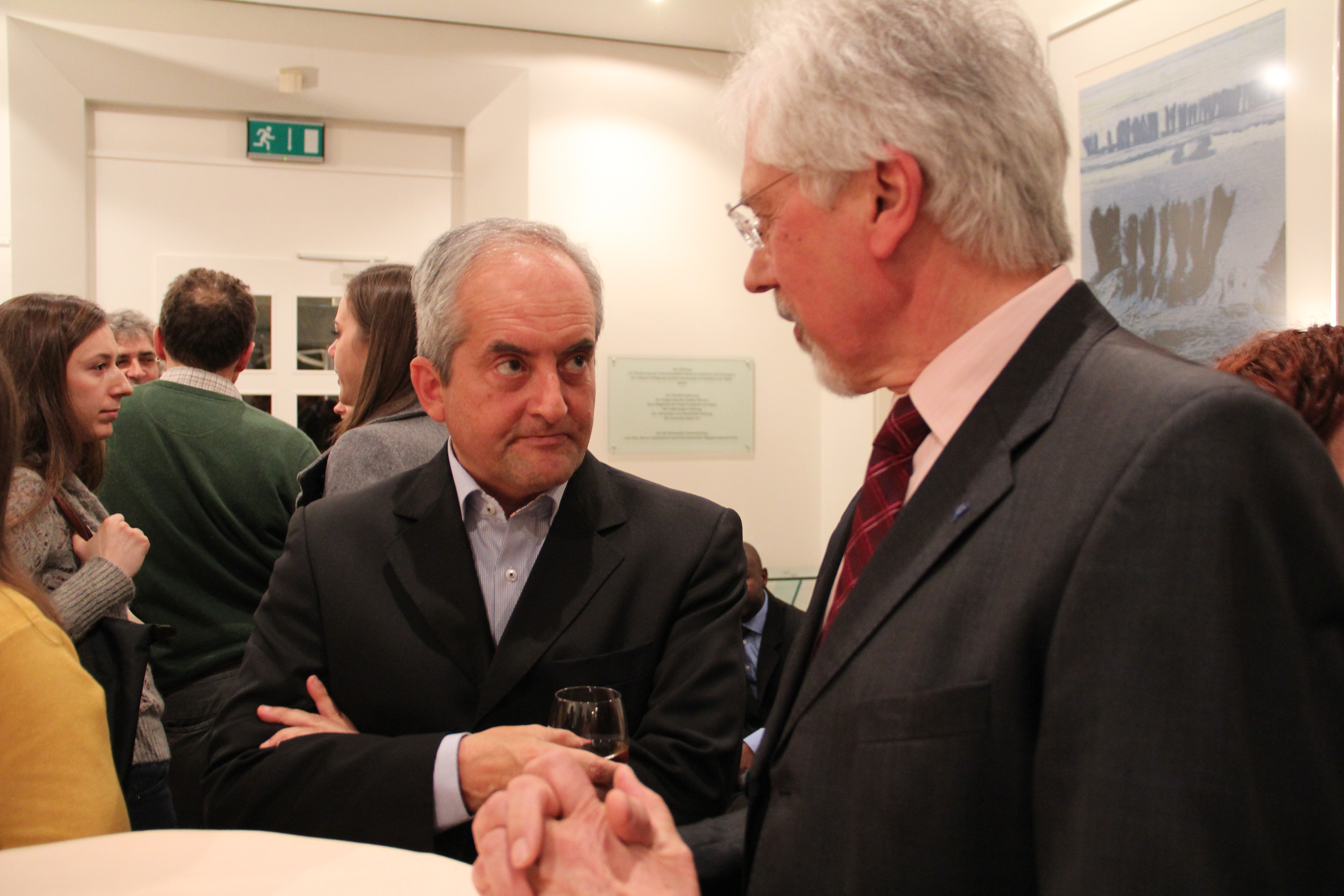 On January 13th, the GWC invited GU’s international researchers and their families to the first official New Year’s Reception for international researchers in GU’s history. With a welcome speech by the university’s president Prof. Werner Müller-Esterl, live Jazz music by Juri Sych on the grand piano music, a rich buffet of traditional local dishes and the elegant location of GU’s guesthouse Frauenlobstraße we all shared a highly  memorable event that allowed all guests to get to know each other over a glass of champagne.