In order to maintain an efficient line of defense against pathogens, cells of the immune system are continually replenished throughout our life. Rapid regeneration of the immune system after hematopoietic stem cell transplantation (HSCT) is also a major prerequisite to prevent serious complications such as the emergence of fatal viral, bacterial, and fungal infections.

Generation of fresh immune cells is a highly dynamic process and prone to errors, which might ultimately result in development of cancers, such as leukemias, immunodeficiency or autoimmune disease, such as type 1 diabetes, multiple sclerosis, or rheumatoid arthritis. Thus, in depth understanding of the underlying molecular and cellular mechanisms underlying immune cell development are paramount for devising improved therapies for a broad range of immune-system related diseases. Furthermore, development of immune cells undergoes profound changes with increasing age coinciding with declining overall functionality making understanding immune cell development an important goal for medicine in an aging society.

Our laboratory is primarily interested in understanding molecular and cellular mechanisms underlying the formation of T cells. T cells are at the center of the adaptive immune response and direct the immune system to adequately respond to each of the near unlimited variety of pathogens. They are also critical for the formation of immunological memory and, thus, a key target of vaccine development. Finally, a certain subset of T cells, so-called regulatory T cells (Treg), help to prevent autoaggression of the immune system.

Specifically, we are working on two aspects of T-cell development:

T cells, unlike other blood cells, finalize development in the thymus. We are trying to understand migration of progenitor cells from bone marrow to the thymus in molecular and quantitative terms. To this end, we have recently identified two receptors, CC chemokine receptors 7 and 9, which coordinate colonization of the thymus by progenitor cells. In addition, we have characterized these progenitors by defining minimal common characteristics. We demonstrated that indeed multiple different population act as physiologic thymus seeding progenitors. Recently, we employed a novel approach of multi-congenic fate mapping to quantitate the number of intrathymic niches for thymus seeding progenitors and defined feedback mechanisms that control thymus colonization. Our experiments have implications for designing pre-transplant conditioning regimens efficiently supporting thymus colonization. Ultimately our experiments are aimed at establishing a complete quantitative spatio-temporal model of early T cell development. 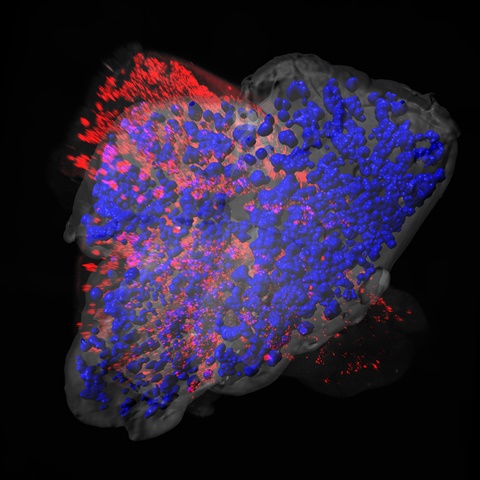 Non-coding (nc)RNAs, such as microRNAs have emerged as a novel layer of post-transcriptional gene regulation. Our laboratory is interested how a progenitor cell’s decision to become a T cell or another lymphoid or non-lymphoid cell type is controlled by ncRNA. To this end, we have conducted microRNA gene expression screens at lineage decision checkpoints and we have begun to establish regulatory networks comprising both, microRNAs and transcriptional regulators. In order to assess the function of microRNAs identified in these screens in vivo we employ classical gene targeting as well as CRISPR/Cas9-mediated deletion. We have shown that deletion of microRNA miR-181a/b-1 causes a profound defect in the generation of non-conventional T cells. Furthermore, we have recently demonstrated that a cluster of microRNAs, miR-17~92 also termed (oncomiR-1 because of its function as an oncogene), is critical for early T-cell development. Ultimately, our experiments aim at integrating post-transcriptional gene regulation in a broader gene regulatory context. Understanding post-transcriptional gene regulatory programs will help to better understand molecular mechanisms of tumor formation and may result in the identification of novel therapeutic targets.