Visit to the Christmas Market in Bad Vilbel: December, 12th 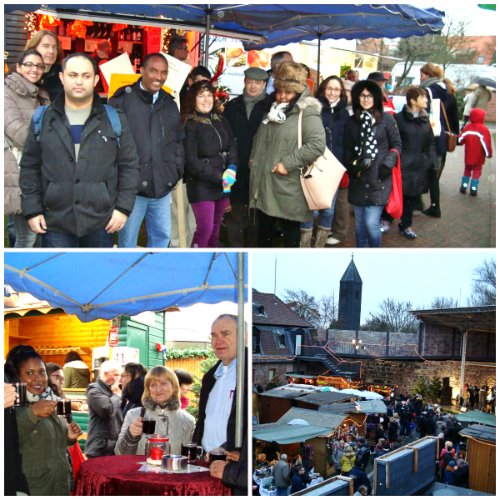 This year, the GWC invited all international researchers to the traditional christmas market in Bad Vilbel, a charming small city located in the immediate vicinity of Frankfurt. Inside of the courtyard of a medieval water castle, the historical Christmas Market took place. The researchers enjoyed the romantic atmosphere: Colourful stalls, steaming hot mulled wine, local handcrafts and of course a variety of different typical German Christmas foods were charming the visitors. A walk along the Nidda river completed the visit.

On Friday November 27th  the GWC organized its traditional Frankfurt-by-Night event for the Winter Term 2015. This time exploring the down town area of Frankfurt, everybody very much enjoyed the outing. 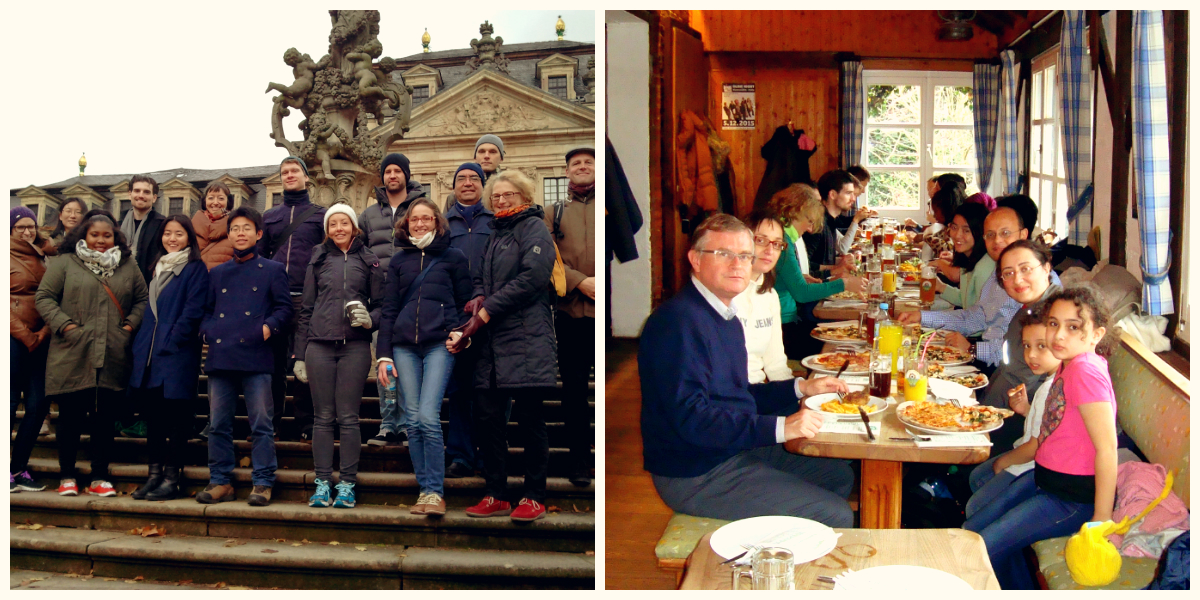 For the first time the GWC organized a full day trip to the more than 1250 years old city of Fulda, the center of baroque architecture in Hessen. Though the weather was quite chilly everybody enjoyed the beauty of this small but very historical Hessian city. During the guided tour through the opulent prince bishop’s palace and our visit to the impressing baroque Cathedral of Fulda we developed a deeper understanding of Fulda’s importance for German Catholicism. 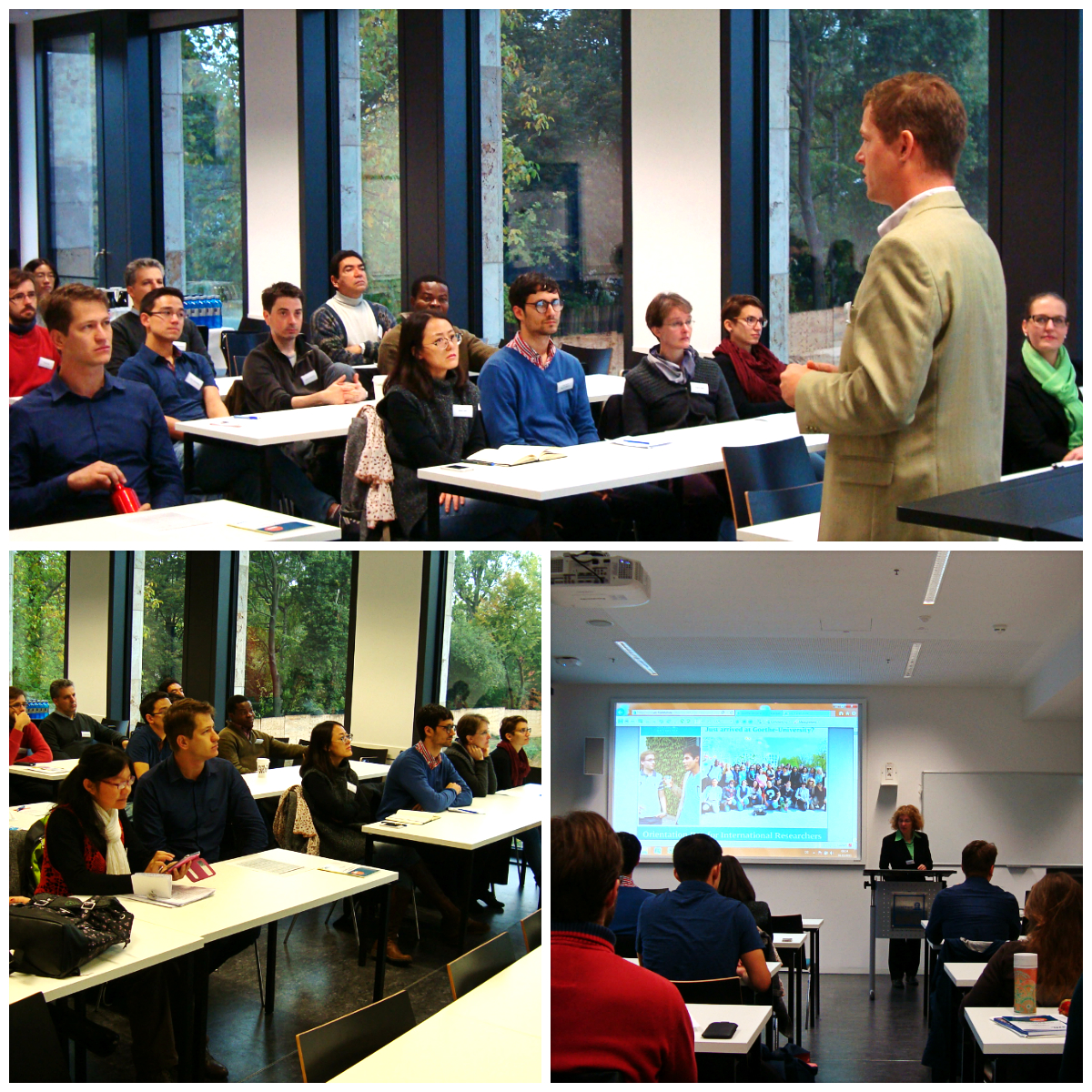 The Goethe Welcome Centre (GWC), the Graduate Academy (GRADE)andthe Department for Human Resources Development (PE/OE) had the honor to invite all newcomer international researchers at Goethe University to GU's Orientation Day for international researchers, PhD candidates and university staff. Almost 50 researchers followed the invitation. Welcomed by our vice-president Prof. Dr. Brigitte Haar, the researchers were introduced to GU's administrative structure and units by some of the most relevant central administrative units for international researchers. The subsequent workshops included an overview over research and scientific career options at GU and in Germany as well as an introduction to PhD prodcedures at GU. The workshops were followed by a lunch together and a guided tour across the historical Westend Campus. 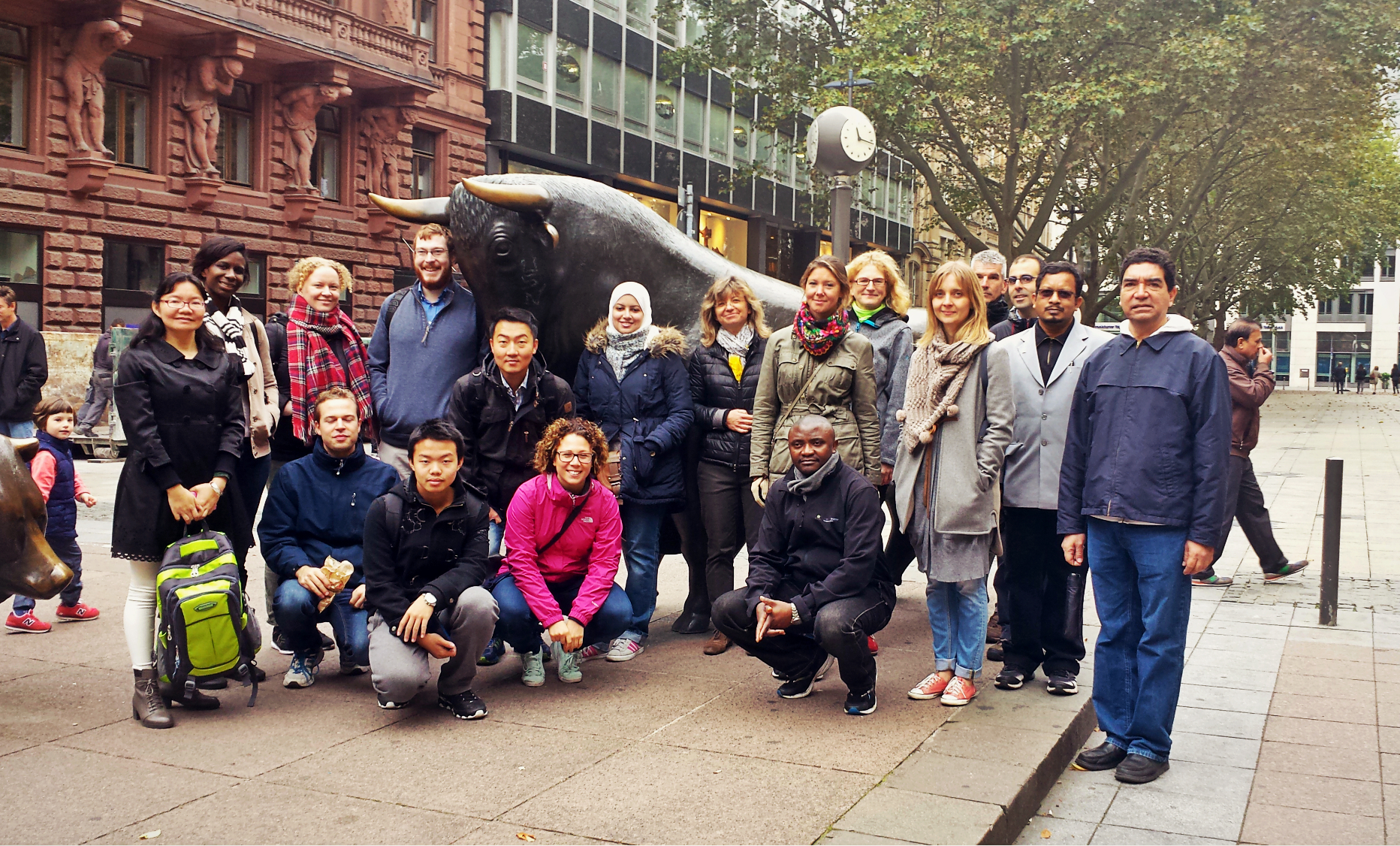 Already well established among GWC’s activities, the Guided City Tour at the start of each semester took the participants on a walking trip around the historical city centre of Frankfurt. For the second time, the tour was guided by our researcher advisor at GWC, Mrs. Gabriele Zinn. After visiting the  MainTower, the Paulskirche, the Kaiserdom and the surrounding downtown area, we ended this tour once again in a famous Ebbelwoi tavern in Sachsenhausen with hefty Hessian dishes and a great pincher of the local cider. 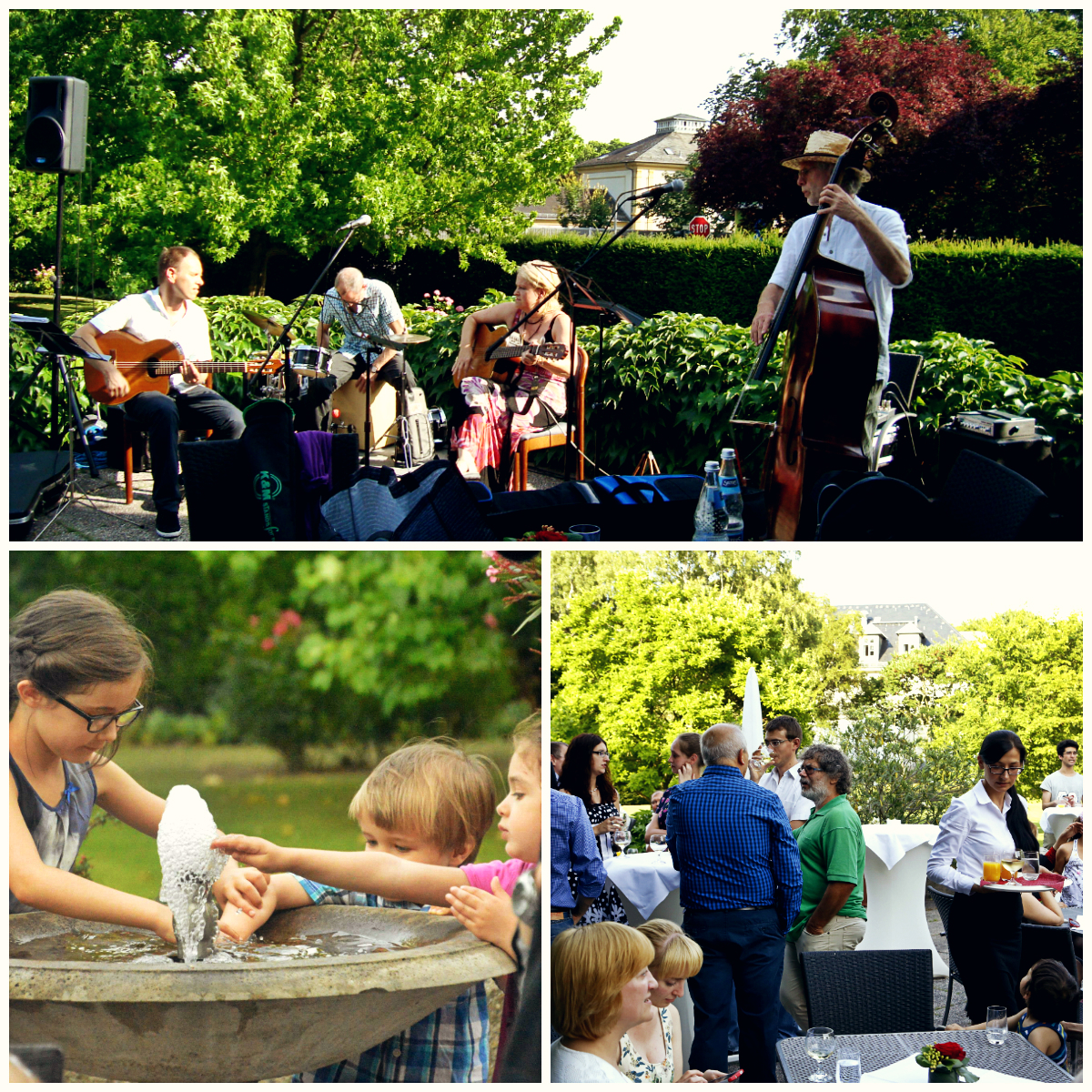 On July 11th, 2015 the Goethe Welcome Centre together with the “Stiftung zur Förderung der internationalen wissenschaftlichen Beziehungen” at Goethe University invited for a Summer Party for international researchers on the terrace and garden of GU’s guest house in Ditmarstraße 4. More than 70 members of GU’s international community and some of their German hosts gathered for this annual highlight. An astonishing pot-luck buffet of national dishes prepared by participants and live music by “Walter’s Sound of Summer” contributed to the great success of this highly sociable event. The party was opened with words of welcome by Prof. Bereiter-Hahn (Chairman Stiftung zur Förderung der internationalen wissenschaftlichen Beziehungen) followed by Mr. von Bothmer (Director Goethe Welcome Centre) and was blessed with some of the finest sunny weather.

Visit to Wiesbaden: May, 23rd 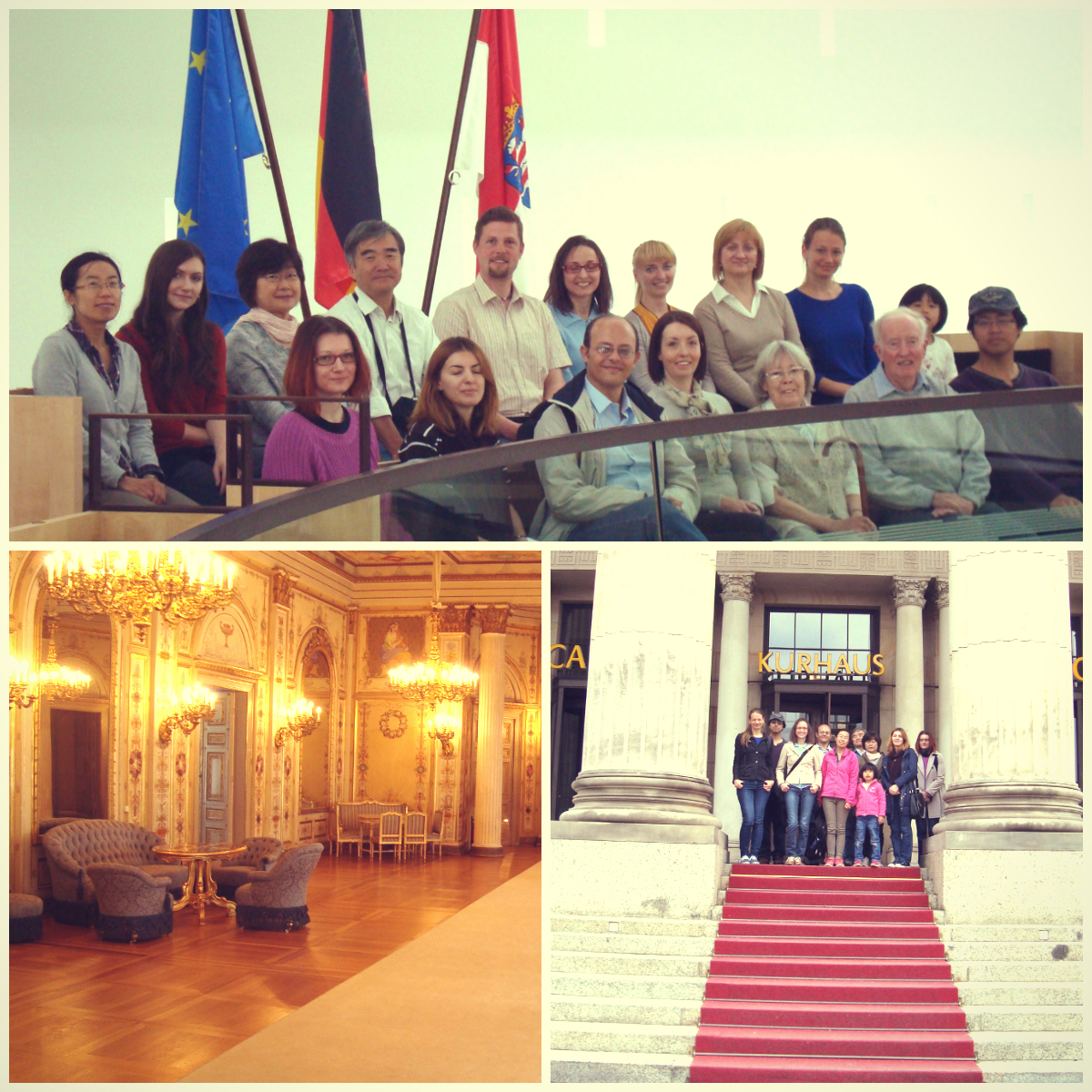 On a sunny Saturday, we explored the imperial State Capital of Hessen. First the guided tour in the Landtag, today's parliament and at the same time the city castle with a long and rich history, introduced us to the history and structure of Hessen's centre of political decision-making. After exploring the historical oldtown as well as a few of the famous springs of Wiesbaden we had lunch at a traditional German restaurant in one of the picturesque narrow lanes. Then we took a ride on the historical Nerobergbahn to the top of the Nero mountain where we visited the famous Russian church of St. Elisabeth and the war memorial. 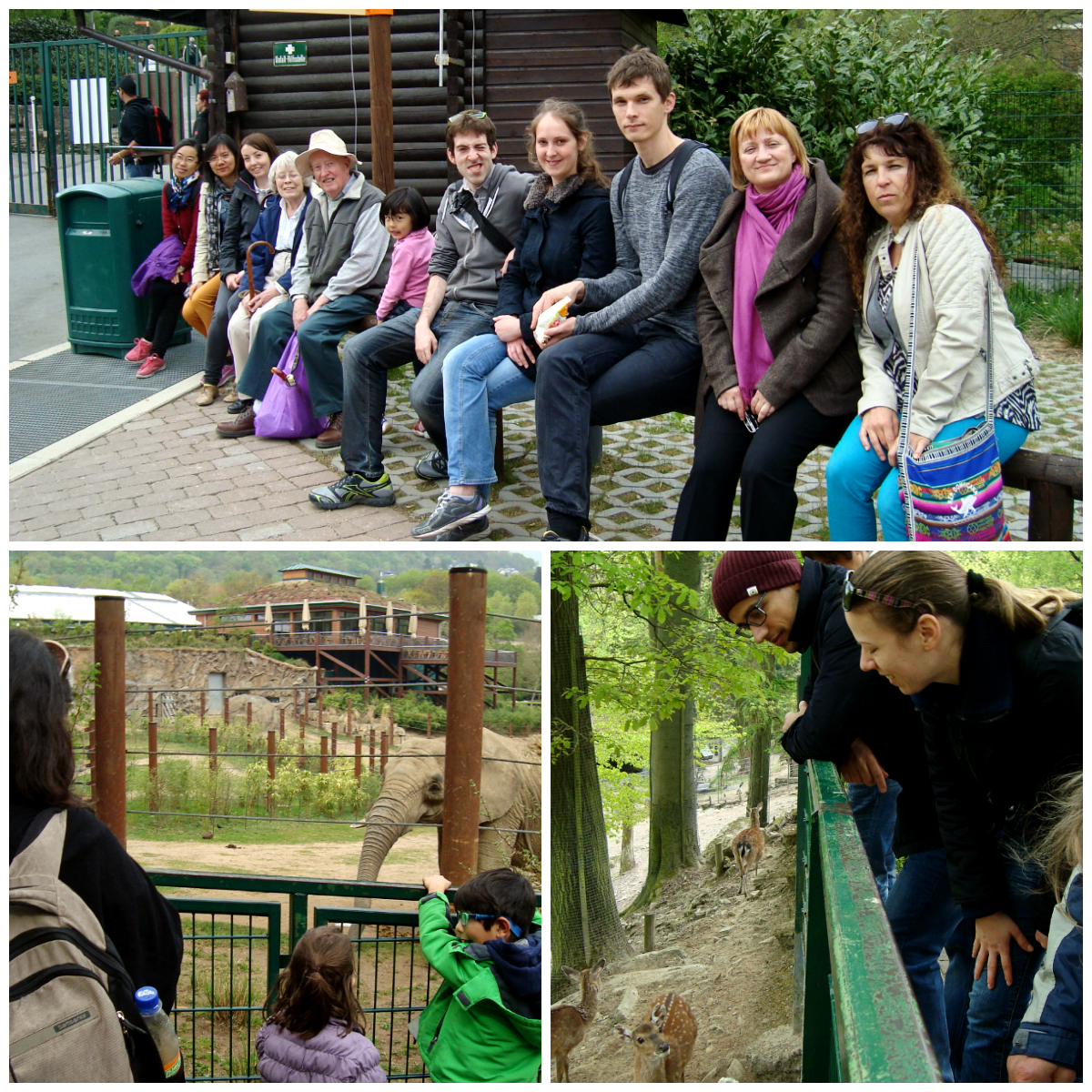 Only 45 Minutes away from Frankfurt, in the picturesque Taunus Mountains lays the famous Opel Zoo – established in 1955 by the automobile entrepreneur Georg von Opel. This zoological garden, which was started as a research project by creating a wildlife habitat to all kind of animals, is now home to the only elephants in Hessen, but also starring cheetahs, penguins, rhinos, zebras, apes, and more. For lunch, we rested at the restaurant “Sambesi”, before we took a long walk through the various attractions of the zoo, including the children’s zoo and the petting zoo. 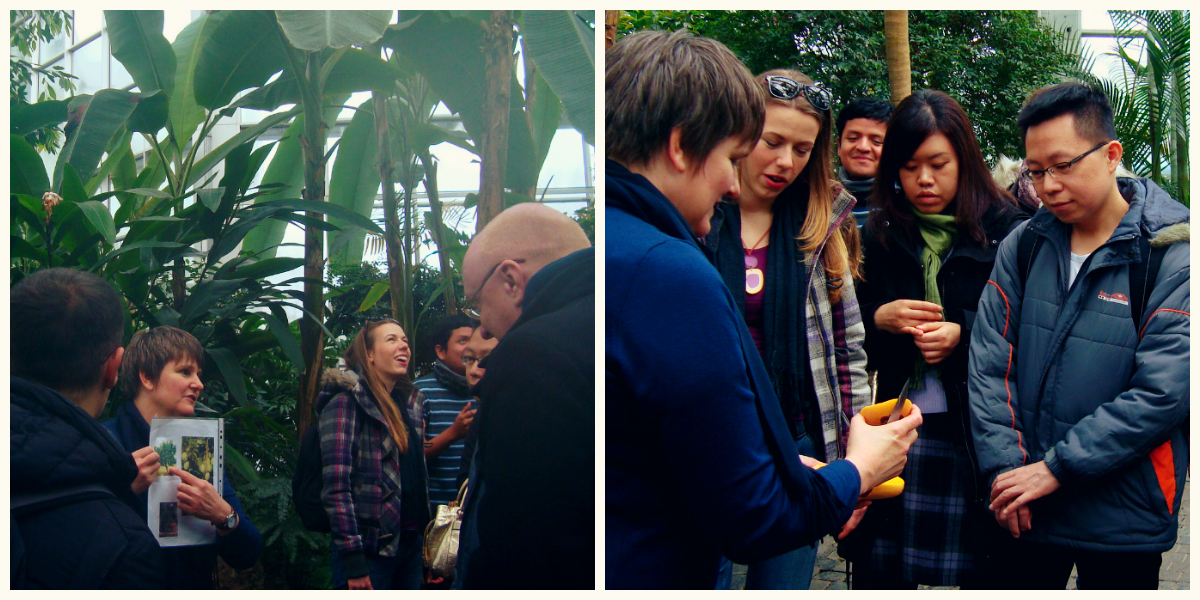 On Saturday, 14th of March, the GWC invited all international researchers and their families to a visit to Frankfurt’s famous Palmengarten with its extensive greenhouses filled with tropical rainforests, exquisite subtropical species and a unique collection of flowers and plants. We started with a guided tour through the green houses getting to know tropical crops, spices and fruits, among them cocoa beans, aloe vera and maracuya. After the tour, we spent one hour exploring the fifty acres of exotic plants and manicured parkland as well as the Special Orchids Exhibition. Finally, we enjoyed coffee and cake at the gourmet Café Siesmayer. 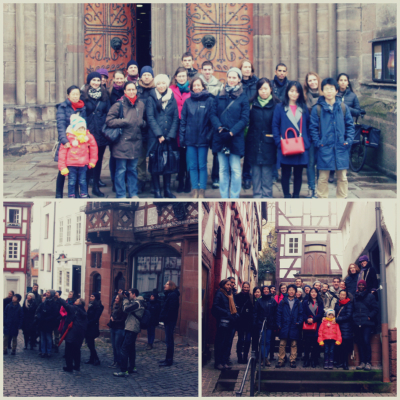 On Sat. 21.02.2015 the GWC organized an excursion to the lovely city of Marburg in the north of Hessen. The town impresses with its historic flair from the old city up to the castle, and is also home to one of Germany’s oldest universities (founded in 1527). On a beautiful winter day we first paid a visit to the famous Saint Elizabeth Church, than had a professional guided tour through the old university and the surrounding historical city. After a great lunch in one of Germany’s oldest restaurants (since 1569) we continued with a hike up to the castle of the Landgrave overseeing the city and the very scenic Lahn valley. The wonderful museum rewarded us for the steep climb with an outstanding collection of mediaeval art, pottery, weaponry and furniture. 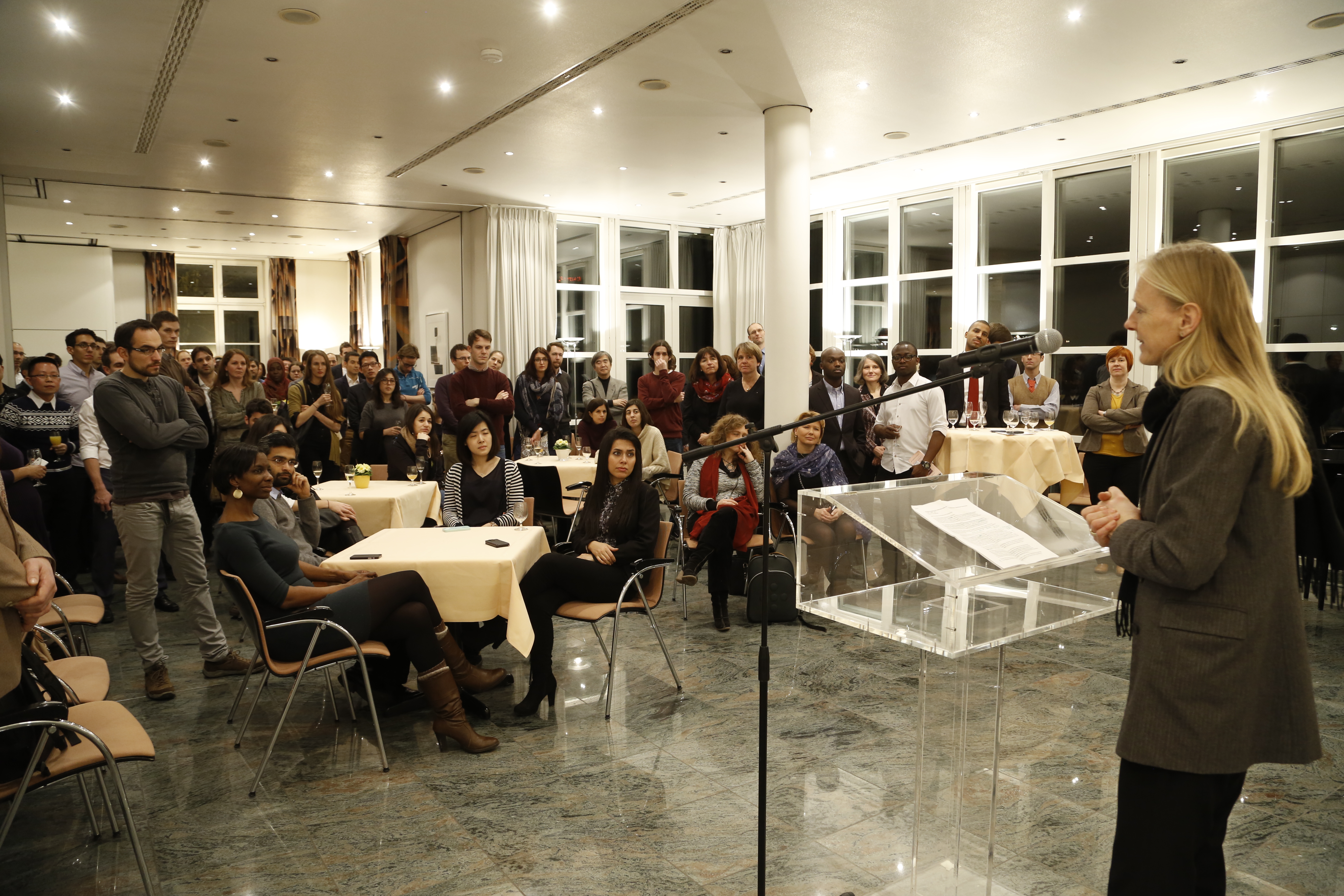 For a second time the GWC invited all international researchers at Goethe University to a New Year’s Reception at the guest house in the Frauenlobstrasse on Jan. 27th.  Under the patronage of GU’s new president Prof. Dr. Birgitta Wolff and together with GU’s international DAAD scholars we had a beautiful dinner reception with life music. The much anticipated New Year speech by the president stressed the great importance of international mobility for GU’s academic efforts to find answers to today’s great environmental, social, political, educational, medical as well as economic challenges. According to her words GU has developed considerably towards being an internationally renowned scientific player during the last two decades. Furthermore she assured, the great emphasis will be put on further strengthening GU international profile also in 2015.