Workshop "Recent advances on the geometry of valuations"

Supported by the Volkswagen Foundation

If you are interested in participating please send an informal email to ValuationWorkshop@math.uni-frankfurt.de. Prospective participants with a need for financial support should attach a CV and a recommendation letter from a senior mathematician (thesis advisor for instance).

Birational sequences and the tropical Grassmannian of planes

K-stability is a limiting version of GIT stability, which has recently been proved to be equivalent to the existence of a Kähler-Einstein metric for Fano manifolds. I will review some aspects of a joint project with Hisamoto and Jonsson, in which we use Berkovich spaces over a trivially valued field to interpret and study K-stability via non-Archimedean pluripotential theory.

Multiplier ideals and jumping numbers are invariants that encode relevant information about the structure of the ideal to which they are associated.

These notions can be generalized allowing to consider several ideals at the same time. In this case we talk about mixed multiplier ideals and jumping walls, the equivalent notion in this setting.

This talk will be divided in two parts. A first part will be devoted to introduce some basics about multiplier ideals. For the second part of the talk, we will present an algorithm that for given ideals will compute the associated jumping walls and mixed multiplier ideals.

The presented results are a joint work with Maria Alberich-Carramiñana and Josep Àlvarez Montaner.

We present the results of our study of Cox rings of crepant resolutions of three-dimensional quotient singularities C^3/G where G is finite subgroup of SL(3,C). We use a certain criterion involving monomial valuations to search for Cox rings of such resolutions. From this ring we can extract information on the geometric structure of each resolution, the number of different resolutions and the relations between them.
The talk is based on the joint work with Maria Donten-Bury (arXiv:1701.09149).

Mustafin varieties are flat degenerations of projective spaces induced by a choice of an n-tuple of lattices in a vector space over a non-archimedean field. These varieties have a rich combinatorial structure as can be seen in pioneering work of Cartwright, Häbich, Sturmfels and Werner. In this talk, we give a new description for Mustafin varieties in terms of images of rational maps, which were studied by Li. We completely classify the irreducible components of Mustafin varieties associated to a tuple of lattices. We relate Mustafin varieties for convex point configurations to Shimura varieties and certain moduli functors which appear in the limit linear series theory developed by Osserman called prelinked Grassmannians. Our methods include tropical convex hull computations and tropical intersection theory. This is joint work with Binglin Li.

The (classical) Schottky problem asks for a classification of those abelian varieties that are the Jacobian of a curve. It was shown by Igusa that in genus four the locus of Jacobians is cut out by a single polynomial in the theta constants of a matrix from the Siegel upper half-plane. We show how tropicalizing this polynomial enables us to recover the metric graph from a tropical Jacobian. This construction generalizes to arbitrary genus although in the classical situation Igusa's result holds only for genus four. This is joint work with Lynn Chua and Bernd Sturmfels.

The classical Fano scheme of a variety X parametrizes linear spaces contained in X. It is well understood for certain class of varieties such as toric varieties or hypersurfaces, but there are still many open questions concerning dimension and irreducibility. In this talk I am going to define the tropical analogue of the Fano scheme and I will show some of its properties. I will then explain how it would be possible to use the tropical Fano scheme to understand its classical counterpart.

The tropicalization of the moduli space of compactified spin curves

The theory of linear series on tropical curves allows for a combinatorial systematic treatment of degenerations of classical linear series, leading to a number of beautiful results connecting classical and tropical viewpoints. The moduli space of spin curves over curves of given genus and its compactification by Cornalba are very well studied spaces and, jointly with their generalized version for moduli of higher roots, are important tools in the understanding of the moduli space of curves itself. The tropical version of the space of theta characteristics on a tropical curve, as described by Kharkov, glues together over the moduli of tropical curves of given genus. In this talk, which reports on joint ongoing work with Lucia Caporaso and Marco Pacini, I will describe instead the tropicalization of Cornalba’s moduli space and speculate on a number if possible properties and applications of this space.

A theory of linear systems on graphs have been introduced by Baker and
Norine in analogy with the one on algebraic curves. Their groundbreaking
work has led to the development of a Brill–Noether theory on tropical curves,
which provides new combinatorial insights in the study of linear systems on
curves. The interplay between the tropical and the classical theory is given
by specialization of linear systems from the generic fiber of a 1-parameter
family of curves to the dual graph of the special fiber.
In this talk, I will address questions on the Brill–Noether theory of generic
smooth curves on P1 × P1 by specializing to complete bipartite graphs.
This is a joint work with with Filip Cools, Michele D’Adderio and David
Jensen.

Working with valuations in tropical geometry

In this talk, we will discuss some challenges that arise in computer algebra when dealing with tropical varieties over fields with valuations.

Algebraically, many problems hinge on the computation of initial ideals. Classically, for trivial valuations, this is done using well-known Gröbner basis techniques. However, they are inapplicable for non-trivial valuations because their underlying monomial orderings ignore any valuation on the coefficients. This can be solved either by modifying the existing notion of Gröbner bases, as done by Andrew Chan and Diane Maclagan, or by introducing a new variable to emulate the valuation.

We will be reviewing both methods and compare their implementation in MACAULAY2, SAGE and SINGULAR.

On Lang's conjecture for some product-quotient surfaces

We prove effective versions of algebraic and analytic Lang’s conjectures for product-quotient surfaces of general type with geometric genus P_g = 0 and c_1^2 = c_2.

A Lefschetz (1, 1) theorem in tropical geometry

The classical Lefschetz theorem characterizes the cohomology classes of complex projective varieties which arise as Chern classes of line bundles. It asserts that the these classes are precisely the integral classes contained in the (1, 1) part of the Hodge decomposition. In this talk I will explain an analogous result for polyhedral spaces. In joint work with Philipp Jell and Johannes Rau, we show that the tropical cohomology classes arising from tropical line bundles are precisely the integral classes contained in the kernel of the so-called wave map of Mikhalkin and Zharkov. Combining this result with Poincaré duality, given a tropical manifold of dimension n we can completely describe the tropical homology classes of type (n-1, n-1) that can be represented by so-called straight cycles. These are the candidates for the tropicalization of algebraic cycles. I will explain the proof of these facts along with corollaries and examples of our results.

Tropical geometry of the Hodge bundle

Abstract: The Hodge bundle is a vector bundle over the moduli space of smooth curves (of genus g) whose fiber over a smooth curve is the space of abelian differentials on this curve. We may define a tropical analogue of its projectivization as the moduli space of pairs (Γ, D) consisting of a stable tropical curve Γ and an effective divisor D in the canonical linear system on Γ. This tropical Hodge bundle turns out to be of  dimension 5g-5, while it is a classical fact that the projective Hodge bundle has dimension 4g-4. This means that not every pair (Γ, D) in the tropical Hodge bundle arises as the tropicalization of a suitable element in the algebraic Hodge bundle.

In this talk I am going outline a comprehensive (and completely combinatorial) solution to the realizability problem, which asks us to determine the locus of points in the tropical Hodge bundle that arise as tropicalizations. Our approach is based on recent work of Bainbridge-Chen-Gendron-Grushevsky-Möller on compactifcations of strata of abelian differentials. Along the way, I will also develop a moduli-theoretic framework to understand the specialization of divisors to tropical curves as a natural tropicalization map in the sense of Abramovich-Caporaso-Payne.

This talk is based on joint work with Bo Lin, as well as with Martin Möller and Annette Werner.

Given a smooth Mori dream space X we construct a model dominating all the small Q-factorial modifications via tropicalization. This construction allows us to recover a Minkowski basis for the Newton-Okounkov bodies of divisors on  X and hence the movable cone of X. The existence of such basis allows us to prove the polyhedrality of the global Newton-Okounkov body and the existence of toric degenerations. This is a work in collaboration with Elisa Postinghel. 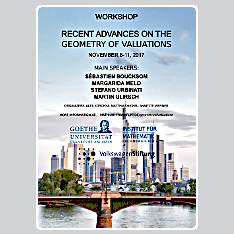