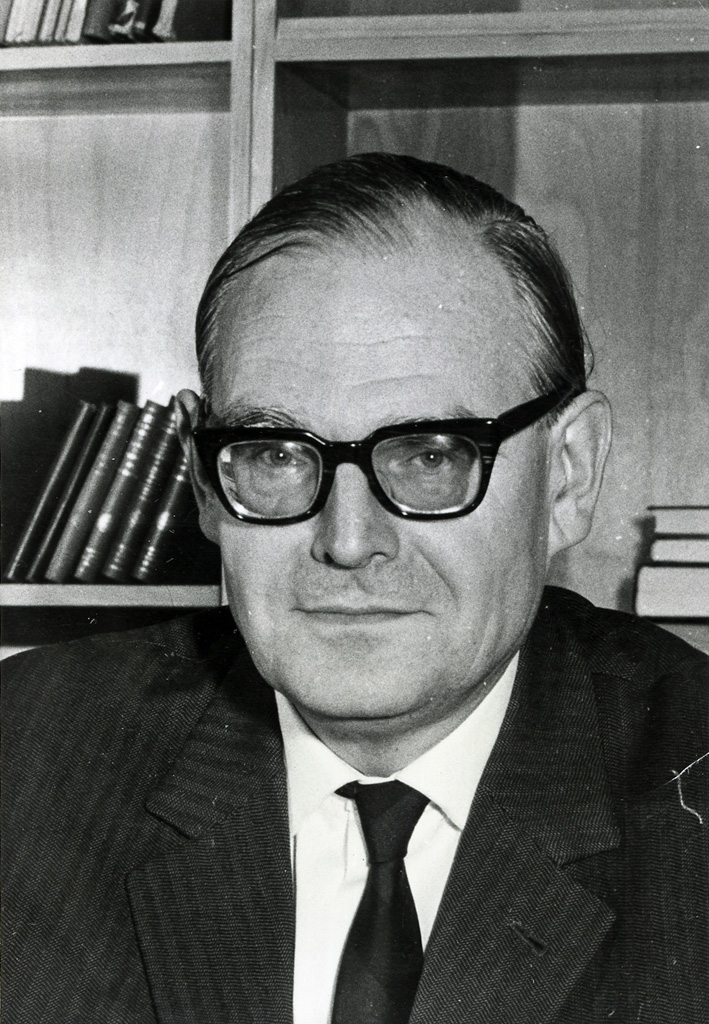 Born into a Huguenot family of civil servants in Celle in 1912, Helmut Coing attended grammar school in Hanover and then studied law in Kiel, Munich, Göttingen, and Lille in France. After obtaining his doctorate from Göttingen University in 1935, he transferred to Frankfurt, where he rapidly completed his post-doctoral qualification, the habilitation, in 1938 on The Reception of Roman Law in Frankfurt am Main. Two years later, he was appointed associate professor. Besides the aforementioned fields, Coing’s research focused in particular on the relationship between law and the existing economic order. Drafted as a reserve officer during the Second World War, on his return from prisoner-of-war camp in 1948, he was appointed full professor of the Goethe University.

Helmut Coing became Rector of Frankfurt University in 1955 and Chairman of the then West German Rectors’ Conference in 1956. He occupied many top-ranking positions in the university self-governance system and was active in the development and expansion of (west) German research. As co-founder and chairman (until 1961) of the German Council of Science and Humanities, the oldest consultative body on research policy in Europe and the most important of its kind in Germany, Coing was closely associated with the political development of the early Federal Republic. The expansion of the university system and its funding by both federal and state government were concerns close to his heart. In 1964, he founded the Max Planck Institute for European Legal History, whose director he remained until 1980. Since 2013, the institute has been located on the Goethe University’s Westend Campus. From 1978 to 1984, Coing was also Vice-President of the Max Planck Society for the Promotion of Research. And just as the society strove to maintain the independence of teaching and research vis-à-vis the federal states, so Coing sought to do the same for Germany’s colleges and universities. In 1980, the Max Planck Society made him an Honorary Senator as did, six years later, the Goethe University.

Coing received numerous honorary doctorates as well as awards of the highest order from both home and abroad, to include the Knight Grand Cross of the Order of Merit of the Italian Republic (1990), Germany’s Grand Federal Cross of Merit with Star and Riband (1990), and the Hessian Order of Merit (1990). Helmut Coing died in 2000 in Kronberg im Taunus.

The path named after Helmut Coing on the Westend Campus symbolically connects the two institutions that he actively helped shape and fostered during his lifetime: the Max Planck Institute for the History of European Law and the Goethe University.