Norbert Wollheim was born in 1913 in Berlin. He completed the Abitur—the German school-leaving exam—in 1931, and intended to study law. But the laws passed by the National-Socialists in 1933, discriminating against and ostracising Jews, put a stop to his plans. So in 1935, Wollheim began working for a firm trading in iron and manganese ore. After the pogroms of November 1938, he helped organise the transportation of Jewish children to Great Britain, where they were safe from National-Socialist persecution.

With the outbreak of war, the situation of Germany’s Jews worsened, and so Wollheim trained to be a welder—an occupation vital for the war effort that for a while protected him and his family from harassment. But in 1943 they were arrested within the framework of the so-called “Factory Action” (the roundup of Jews still working in German factories) and deported to Auschwitz concentration camp.

Wollheim’s wife and son were murdered in the gas chambers shortly after their arrival in Auschwitz, and Wollheim himself was taken to the Buna/Monowitz concentration camp. In this satellite camp, prisoners were used for slave labour until the terrible living conditions there rendered them too weak to work; they either died of exhaustion or were murdered. The camp belonged to the “Community of Interests of Dye-making Corporations plc” (I.G. Farben), that ran a chemical plant there for manufacturing Buna (a form of synthetic rubber). The prisoners were rented out by the SS as slave labourers for four to six Reichsmarks per day.

IG Farben plants at other locations also produced typhus serum for experiments on concentration camp prisoners, in particular in Buchenwald. IG Farben also held shares in Degesch, the company that manufactured Zyklon B—a pest control substance whose active agent was hydrogen cyanide and that was used for the mass industrialised murder of concentration camp inmates, especially in Auschwitz.

Shortly before the arrival of the Red Army in 1945, thousands of prisoners from Buna/Monowitz were forced to leave the camp on so-called “death marches”. Wollheim was able to escape with some fellow prisoners and was finally rescued by the Americans. Although he did not really want to remain in Germany, after the Second World War Wollheim became an important figure in the reconstruction of Jewish life in northern Germany. He settled in Lübeck, championed the cause of Jewish displaced persons in the British zone of occupation, and was an important witness for the prosecution in several trials involving IG Farben—for instance at the International Military Tribunal in Nuremberg.

Represented by the German-Jewish lawyer Henry Ormond—who was himself held in Dachau concentration camp in 1938/39 before emigrating to England and returning after the war as a British officer in the occupying forces—Wollheim sued IG Farben in 1951 for compensation. On 10 June 1953, his case was upheld on all points, and he was awarded 10,000 Deutschmarks in damages. In the following appeal proceedings, an out-of-court settlement was reached: IG Farben promised Norbert Wollheim and the Jewish Claims Conference (the Conference on Jewish Material Claims Against Germany—the umbrella organisation of Jewish Holocaust groups) to pay a total of 30 million Deutschmarks to surviving ex-slave labourers from Buna/Monowitz and its satellite camps Fürstengrube and Janinagrube. This test case was largely responsible for the German Bundestag’s passing the first Federal Compensation Law in July 1953 (renewed in 1956), regulating the question of compensation de jure. Norbert Wollheim, who had already emigrated to the United States in 1951, died in New York in 1998.

Position and Composition of the Memorial 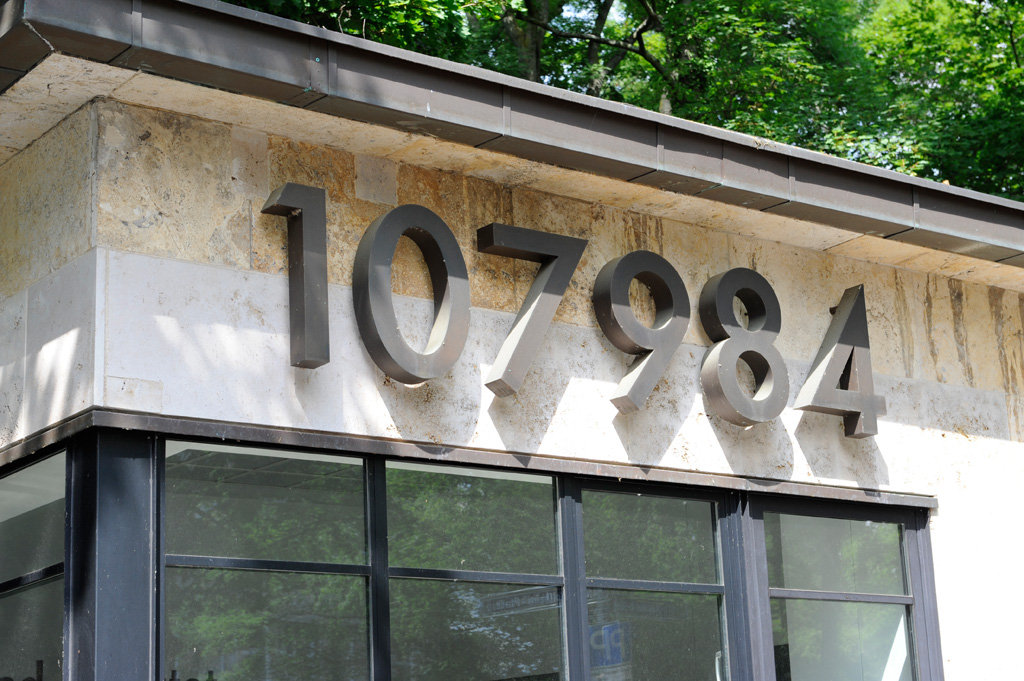 Designed by artist Heiner Blum, the memorial consists of photographs mounted on a row of panels and a pavilion with video installation. The site of the memorial has been carefully chosen: the building commissioned by IG Farben and designed by architect Hans Poelzig was headquarters of that pan-German association of leading chemical concerns which played a significant role in the Nazi war industry. The memorial thus honours the victims of National-Socialist crimes committed with the connivance of German big business. At the same time, it highlights the complicity of those who were supposedly not directly involved—the administrators and bureaucrats—the memory of whose role is explicitly upheld here on the Westend Campus of the Goethe University.

The photographs on the site in front of the IG Farben Building indicate the way to the pavilion. They portray some of the people sent to Buna/Monowitz before they were persecuted and interned, thus illustrating Jewish everyday life before the Holocaust. The poignancy of these scenes of daily life that was so abruptly destroyed is made the stronger by displaying the prisoners’ concentration camp numbers in red on each portrait. To facilitate orientation, the positions of the photo panels are indicated on the memorial plan map by lower-case letters; the names of those portrayed may be found in the key to the installation. More information on the photo panels and the biographies of all those portrayed may be found on the memorial website.

Other digits are displayed above the windows of the pavilion: they make up Wollheim’s prisoner number in Buna/Monowitz. In the pavilion itself, a video screen shows 24 interviews conducted with eye-witness survivors from Buna/Monowitz documenting their sufferings. A website provides information on numerous other details of Norbert Wollheim’s life and the memorial: www.wollheim-memorial.de. The website was set up and is maintained by the Goethe University and the Fritz Bauer Institute.

Setting up a memorial on a university campus is a highly symbolic act. In the case of the Wollheim Memorial, the decision was made in 2007 after a lengthy debate conducted by survivors of the Shoah, a student initiative, the university governing body, and a number of other experts. In June of 2014, the university senate voted to further honour Norbert Wollheim’s memory—as part of a comprehensive plan to reroute and rename streets and squares on the Westend Campus—by naming the central square in front of the IG Farben Building after him. This decision too was reached thanks to the commitment of Shoah survivors. Besides Karl Brozik of the Jewish Claims Conference, who had expressed a wish to see a Norbert-Wollheim-Platz as early as 2001, the plan to rename the square had been supported since 2004 by in particular Trude Simonsohn, Arno Lustiger, the Committee of Buna-Monowitz Survivors, the Fritz Bauer Institute, and a student initiative. Ten years later, the square was renamed. Today “Norbert-Wollheim-Platz” is the official address of the Goethe University humanities departments. This honouring of Norbert Wollheim is a visible reminder not only of the man and his struggle for justice but also of the crimes in which IG Farben participated. But above all, it honours the people murdered in the Buna/Monowitz concentration camp, who came from almost all the countries of Europe.

In 2016/17, the university governing body commissioned a renovation of the memorial, which was coordinated by the Frankfurt Humanities Research Centre.