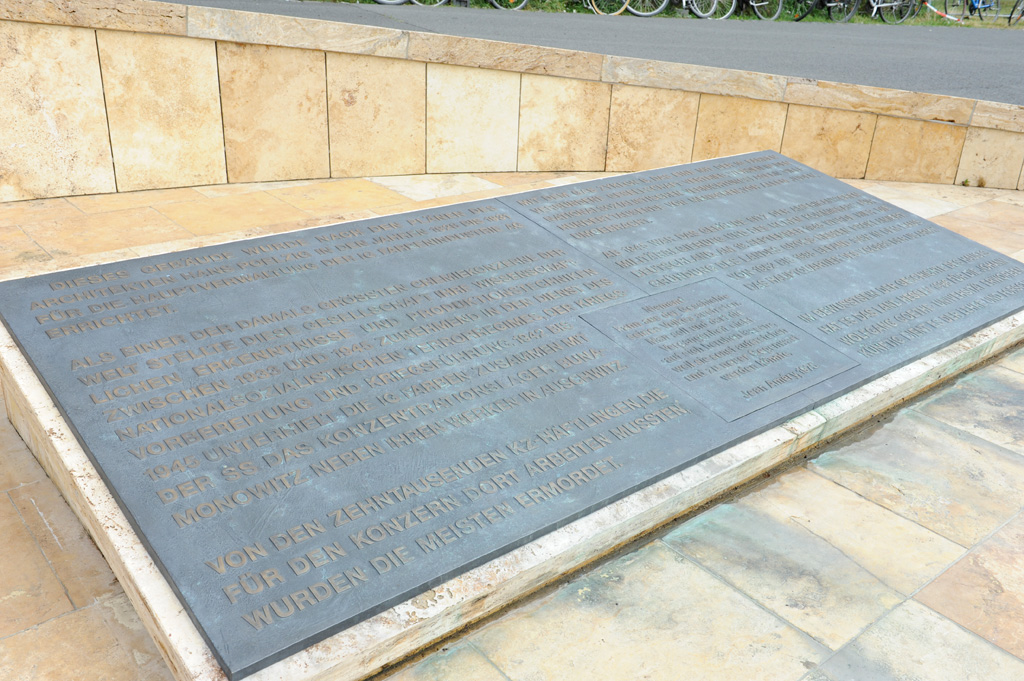 The former administrative headquarter of the Community of Interests of Dye-making Corporations plc (IG Farben) has an eventful history. This includes the cooperation of the IG Farben concern with the National Socialist terror regime. The plaques in front of the main entrance commemorate the victims of the Nazi dictatorship and the Second World War. Furthermore, they outline the central phases of the building’s history. The text is as follows:

„This building, designed by the architect Hans Poelzig, was constructed between 1928 and 1931 to house the administrative headquarters of the IG Farben company.

As one of the world’s largest chemical corporations at the time, this company – between 1933 and 1945 – increasingly put its scientific findings and manufacturing techniques at the service of the national socialist regime of terror and the preparation and conduct of war. From 1942 to 1945, IG Farben, together with the SS, operated the Buna-Monowitz concentration camp alongside their factories in Auschwitz.

There, of the tens of thousands of concentration camp prisoners forced to work for the company, most were murdered.

After 1945 this building became the seat of the American military government and of the U.S. High Commissioner for Germany. The foundation of the state of Greater Hessen was proclaimed here on 19 September 1945. From 1952 to 1995 it housed the headquarters of U.S. Army V Corps.

In full awareness of the building’s history the state of Hessen acquired it in 1996 on behalf of Johann Wolfgang Goethe University. Henceforth it is dedicated to teaching and research.”

The text is grouped around a quote of the Austrian writer and resistance fighter against National Socialism, Jean Améry:

“None of us can escape the history of our people. We should not and must not “let the past rest”, otherwise it might be resurrected and become the new present.” Jean Améry, 1975.