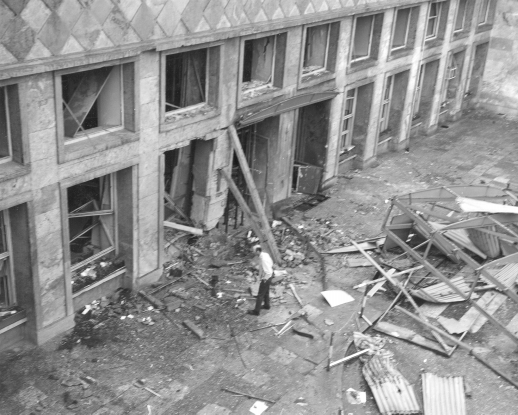 As headquarters of the US Military in Germany, the administrative complex of the former “Community of Interests of Dye-making Corporations plc” (IG Farben) continued, even after the end of the Second World War, to be a building of enormous symbolic import. After the site was occupied by American troops, it was initially fenced off, accessible only through strict security controls. But as the years passed, relations between occupiers and occupied became increasingly more relaxed. The fence was finally taken down, and the American troops became more integrated into the city’s daily life. Since American officers and soldiers were from early on housed in neighbouring areas, daily contact between the two groups had in any case become a matter of course. As they do today, schoolchildren delighted in travelling in the main building’s paternoster lifts, local residents strolled through the park areas, and the younger generation in particular cultivated the “American way of life”.

The terrorism of the 1970s brought an abrupt end to this easy-going relationship. The Red Army Faction (RAF), which operated throughout West Germany and was networked with other terror groups abroad, opposed not only the political system of the Federal Republic but also the worldwide military engagement of the USA, particularly in Vietnam. Emerging from the protest movement of the 1960s, this anti-capitalist, anti-imperialist group with its estimated 60 to 80 members spurned peaceful demonstration. At the beginning of the 1970s Andreas Baader, Gudrun Ensslin, Ulrike Meinhof and others formed a “guerrilla” group committed to violence. After robbing a number of banks to finance their terrorist attacks, the RAF initiated a campaign of bombings.

On 11 May 1972, the RAF’s “Kommando Petra Schelm” detonated a total of three explosive devices on the former IG Farben site: in the foyer of the main building and in the entrance to the Casino, then known as the Terrace Club.[1] Lieutenant Colonel Paul A. Bloomquist was killed and thirteen other individuals wounded, in part seriously. The building was heavily damaged. This was not only the RAF’s very first bomb attack: it initiated the RAF’s so-called “May Offensive”, during which five further such attacks were carried out.

Four years later, shortly after the death of Ulrike Meinhof in prison, two further bombs exploded in the Terrace Club and the main building on 1 June 1976. An “Ulrike Meinhof Brigade” claimed responsibility for the attack, which wounded 16 people. Once more, the attack was carried out in the name of the struggle against global capitalism and the “American Army of Occupation”.[2]

Further attacks on the troops stationed in the IG Farben Building followed in June and July of 1982—as a reaction to Ronald Reagan’s attending the NATO summit in Bonn, as well as in protest at Israel’s military intervention in Lebanon. As Israel’s main ally, the terrorists considered the United States to be the driving force behind the military action in the Middle East.

But the American troops were also the target of more peaceful acts of protest in Germany: in August of 1983, the Commanding General of the US Military in Frankfurt, Paul S. Williams, was splattered with blood at a public gathering by the Green Party MP Frank Schwalba-Hoth, in protest at the NATO Double-Track Decision.[3]

As the situation became more tense, the US Military was obliged to increase its security precautions step-by-step, and in 1985 the site of the present campus was completely cordoned off. A system of double fences and security channels with steel-pointed road blocks afforded protection from attack. Obligatory security controls were introduced—and remained in place until the US Military left in 1995.