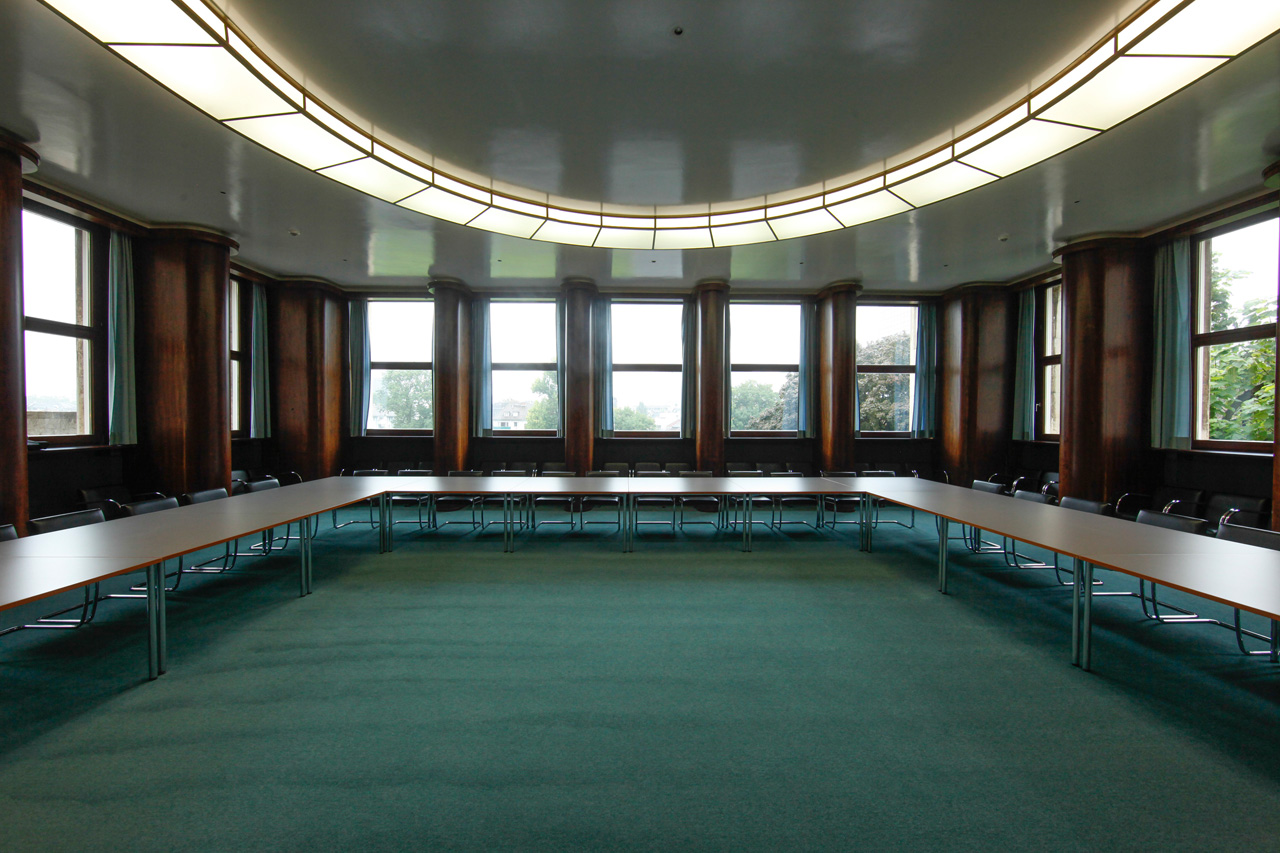 Until July 1945 the Commander in Chief of SHAEF (the Supreme Headquarters of the Allied Expeditionary Forces), Eisenhower used the conference room in cross-wing Q3 of the former IG Farben headquarters as his office and for public receptions. In the post-war years, this room in the scarcely war-damaged building also served Eisenhower as a place to meet with allied commanders and officers, to include Charles de Gaulle, Bernhard Montgomery, and Georgy Zhukov.[1] From this office Eisenhower also directed the operations of US forces in Germany, giving the building the by-name of “Pentagon of Europe”. In addition, from here the demobilisation of the remaining German armed forces and the denazification of the country’s administration and civil society were supervised, not to mention the restructuring of the police force and the maintenance of the country’s health services.

Negotiations over the introduction of the Deutschmark and the future political shape of Germany were also conducted in this room: here the proclamations creating the Federal States of Hesse, Baden-Wuerttemberg, and Bavaria were signed and Wiesbaden declared the new capital of Hesse.[2] Here too, on 1 July 1948, the “Frankfurt Documents” were presented to the then Minister-Presidents of the West German Federal States—Leo Wohleb (Baden), Hans Ehard (Bavaria), Wilhelm Kaisen (Bremen), Max Brauer (Hamburg), Christian Stock (Hesse), Karl Arnold (North Rhine-Westfalia), Hinrich Wilhelm Kopf (Lower Saxony), Peter Altmeier (Rhineland-Palatinate) und Reinhold Maier (Wuerttemberg-Baden)—mandating them to constitute a Parliamentary Council and draft a Basic Law for the Federal Republic of Germany.

Today the university opens the doors of this room that has witnessed so much history only for special occasions and meetings. The listed interior with its wood-panelled walls, uncovered again during renovation work, bears witness to the building’s historical significance.