Continental settings of Central Asia witnessed increased desertification and the establishment of a monsoonal climate during the Cenozoic as result of India’s collision with Asia. In Middle Miocene times, the relative effects of mountain uplift, eustasy and Antarctic ice-shield variations on the moisture transport into Central Asia are largely unknown. Both a much higher temporal resolution and better age control are required to understand the tectonic and paleoclimatic processes controlling the moisture budget of Central Asia. This project aims at reconstructing Middle Miocene climate dynamics in Central Asia from orbital to tectonic time scales based on exceptional exposures of lacustrine successions in SE-Kazakhstan. The primary goal is to establish a well-calibrated orbital stratigraphy for two sections (Aktau Hills and Pyramid Valley) and to correlate them to the Geomagnetic Polarity Time Scale. This will provide the required time framework for paleoclimatic and paleoenvironmental reconstructions. In particular, we intend to study the source and timing of increased moisture supply in Central Asia during the middle Miocene relatively to uplift of the Tien Shan and Eastern Paratethys sea-level change.

The hydrological cycle in eastern Brazil strongly depends on the intensity of the South American Summer Monsoon and the latitudinal migration of the Intertropical Convergence Zone. Earlier studies demonstrated that orbitally forced modulation of solar irradiation and changes in oceanic circulation have led to abrupt shifts in the regional distribution of precipitation. The sensitivity of the hydrological cycle in response to external forcing is insufficiently constrained to date. The main goal of the proposed cruise is to study the influence of late Pleistocene and Holocene changes in oceanic circulation and insolation on continental climate in a highly sensitive region. New sediment cores will be taken from the shelf and continental slope off eastern Brazil (10°S – 23°S). We focus on core locations under the influence of rivers draining the eastern Brazilian hinterland thereby linking marine and terrestrial paleo-records. The sedimentary archives will allow high-resolution multi-proxy studies that aim to reconstruct paleoenvironmental changes in detail and with an excellent age control. Additionally, a comprehensive sediment and water-sampling program is planned for a precise, local proxy calibration.

DFG VO 687/14-1 (IODP/ODP SSP 527/32) "Evolution of deep-ocean circulation during the opening of the Atlantic Ocean in the latest Cretaceous and Paleocene", in cooperation with O. Friedrich and M. Frank, GEOMAR, 2012-2016

The mode of ocean circulation during latest Cretaceous to Paleocene times (75-55 Ma) is poorly understood to date and possible sites of deep-water formation relative to the opening of the Atlantic Ocean are controversially debated. This project aims at the investigation of the conditions of intermediate- and deep-water formation and exchange in the individual sub-basins of the North and South Atlantic Ocean. It is planned to perform Nd-isotope analyses of sediment coatings from a series of DSDP- and ODP-Sites in different sub-basins and different water depths in the North and South Atlantic Ocean. This allows to identify different intermediate and deep-water masses by recognition of their potential source region and the detection of time intervals of established deep-water connections between the oceanic sub-basins. The reliable stratigraphic integration of new and available data will provide answers to the following questions: 1) when became the individual sub-basins of the deep Atlantic Ocean fully integrated into the global thermohaline circulation? 2) In which way formed sub-oceanic volcanic plateaus barriers for deep waters, and 3) how involved was the Caribbean Sea as equatorial gateway for deep-water exchange between the Atlantic and the Pacific oceans.

DFG VO 687/15-2, BA 3809/2-2 “Millennial-scale reconstruction of Orinoco run-off strength and its impact on the Atlantic Meridional Overturning Circulation (MORA)”, co-proponent of Dr. A. Bahr, part of the proposal bundle “OPOKA for investigations on samples and data collected during R/V METEOR cruise M78/1”, 2011-2015

Climate models as well as paleoenvironmental studies demonstrate that moisture availability in the hinterland of the Caribbean and, hence, river run-off into the Caribbean Sea is highly sensitive to climatic changes. Changes of the hydrological cycle in northern South America will not only influence the local water budget but might have far-reaching consequences: Caribbean surface water is an important mediator of the salt budget of the Gulf Stream and thereby preconditions high-latitude deep-water formation. Caribbean surface salinities altered by changes in the freshwater input might therefore ultimately affect the strength of the Atlantic Meridional Overturning Circulation and, consequently, global climate. Despite the clear relevance of this phenomenon, no attempts have been made to reconstruct Holocene and Last Glacial runoff of major rivers into the Caribbean Sea in high temporal resolution. In the proposed project, we want to close this gap by generating Last Glacial to Holocene (semi)quantitative estimates of Orinoco discharge in millennial-scale resolution. The base of the study will be foraminiferal Ba/Ca and δ18Oseawater measurements as locally calibrated proxies for river input and salinity changes in cores located close to the Orinoco Delta. A comparison with records from the Amazon Delta, Caribbean, Gulf of Mexico and Northern Atlantic will show whether anomalously high or low Orinoco/Amazon discharge is changing surface ocean salinity on a large scale and thereby represents a previously underestimated factor within the ocean/climate system.

DFG VO 687/13-1 “Neogene continental climate dynamics prior to the late Miocene uplift of the Northern Tien Shan (Kazakhstan)”, in cooperation with J. Pross, 2011-2015

Continental settings of Central Asia witnessed increased desertification and the establishment of a monsoonal climate during the Cenozoic as result of India’s collision with Asia. These continental-scale climate shifts are connected to the uplift of mountain ranges such as the Tibetan-Himalaya complex and the final retreat of the Paratethys. However, their interplay with the global climate evolution and their timing is yet poorly constrained, partially because of the paucity of available data. An Oligocene-Miocene succession exposed in the Aktau Hills, Ili Basin (northern Tien Shan, Kazakhstan), has a great potential as an archive for continental paleoclimate dynamics in Central Asia because of its high thickness and excellent exposure. We here propose to carry out a reconnaissance field trip to the Aktau Hills and follow-up laboratory work. Our objective is to document the succession in high resolution in order to perform (i) an on-site evaluation of the sedimentary facies based on modern sedimentological concepts; (ii) to document possible discontinuities; and (iii) to evaluate the state of preservation of palynomorphs. If our reconnaissance work proves successful, follow-up studies are planned to be applied in future proposals.

DFG VO 687/11-1 "Towards a global stratigraphic scheme for the Campanian – Maastrichtian (Late Cretaceous): Calibration of carbon isotope stratigraphy with paleomagnetic chrons and biostratigraphy", 2010-2012

The latest Cretaceous was characterised by perturbations in the global carbon cycle, which are assumed to have been associated with ephemeral glaciations. In order to understand the forcing mechanisms, their global significance, and the regional response to these events it is necessary to improve our presently available stratigraphic framework. The pelagic limestone successions at Gubbio, Umbria Marche Basin, Italy have a detailed magnetostratigraphy and serve as tropical reference for the biozonation with calcareous nannofossils and planktonic foraminifera.  We propose to develop a high-resolution carbon isotope stratigraphy at the sections Contessa Highway and Bottaccione using bulk-carbonates to resolve short-lived isotopic events between 80-65 Ma calibrated to paleomagnetic reversals and bioevents. The development of such an integrated stratigraphic framework is important for the global correlation between low and high latitudes and shelf and deep-sea sections. It provides the unique opportunity to recognize leads and lags between the carbon cycle, sea-level changes and ocean circulation of the different oceanic ecosystems.

The latest Cretaceous was characterised by the transition of the Earth´s system from the Cretaceous greenhouse to the cooler Cenozoic climate that includes several perturbations in the global carbon cycle. The aim of this project is to investigate the history of changes in ocean circulation and deep-water formation in the tropical Pacific relative to the late Campanian to early Maastrichtian carbon-isotope events (LCE, CMBE, and MME). We propose to develop an orbitally tuned high-resolution carbon isotope stratigraphy at Shatsky Rise (DSDP Site 305, ODP Site 1210B) using bulk-carbonates to decipher short-lived climatic events between 76-68 Ma. The history of changes in surface- and deep-water temperature will be reconstructed in the course of the carbon isotope events using high-resolution benthic and planktic foraminiferal stable isotope analyses. Changes in ocean circulation and the source regions of different deep and intermediate water masses will be deciphered by using radiogenic isotopes (Nd). Nd isotope analyses of fish teeth and early diagenetic ferromanganese coatings of bulk sediments from the tropical Pacific, the Southern Ocean, as well as the Boreal chalk sea will allow the reconstruction of the deep-water isotope signatures. By comparison of different locations the data will allow a reconstruction of past water mass flow in the tropical Pacific and its relationship to carbon cycle perturbations. Thereby, the developed age-model comparison between the ocean and shelf seas provides the unique opportunity to recognize leads and lags between the carbon cycle and ocean circulation of the different oceanic ecosystems.

The aim of this project is to investigate the orbital forcing of cyclic deposits in the tropical and subtropical North Atlantic during the global carbon cycle perturbation known as the Cenomanian/Turonian Oceanic Anoxic Event (OAE 2). We aim to generate time series at Demerara Rise, tropical Western Atlantic (ODP Sites 1258, 1260 and 1261), off the coast of North America (DSDP Site 603B) and at Gubbio, Umbria, Italy (S4 core) using high-resolution XRF core scanning. The relative changes in XRF element concentrations will be analysed by spectral analysis and calibrated against published records of the OAE 2 δ13C anomaly resulting in the development of regional cyclostratigraphies. The inter-site comparison of dominant orbital periodicities will significantly improve the orbital time scale for OAE 2. Such a new time scale provides the unique opportunity to establish high-resolution correlations between the Atlantic and Western Tethys as well as adjacent shelf seas (e.g., Wunstorf, N-Germany) and to recognize leads and lags between the regional changes in the formation of oxygen deficiency, ocean circulation and temperature in different oceanic settings.

Shark remains are abundant in Late Palaeozoic and Mesozoic continental deposits. The palaeoecology of these fishes is discussed either as permanent freshwater residents or as anadromous animals, which seasonally migrated into freshwater environments for spawning. The aim of this project is the investigation of the geochemical archive of teeth and spines of the fossil freshwater sharks Lissodus and Orthacanthus based on two case studies from the Permo-Carboniferous and the Late Triassic using stable isotopes. The oxygen isotopic composition of skeletal apatite reflects the ambient water chemistry at the time of tooth mineralisation being indicative for a fresh- or seawater environment. Furthermore, freshwater isotopic signals allow the evaluation of the relative altitude of shark-bearing lakes in order to specify the palaeotopography and drainage pattern of orogenic belts and their basins. In addition, the spatial and temporal distribution of freshwater sharks will be critically assessed by the occurrences of possibly related egg capsules. The new freshwater-shark-derived oxygen isotope data set will provide new insights about the isotopic composition of meteoric waters and the hydrology in Late Palaeozoic and Early Mesozoic times. 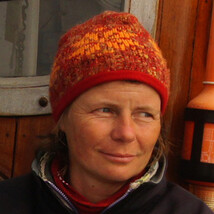