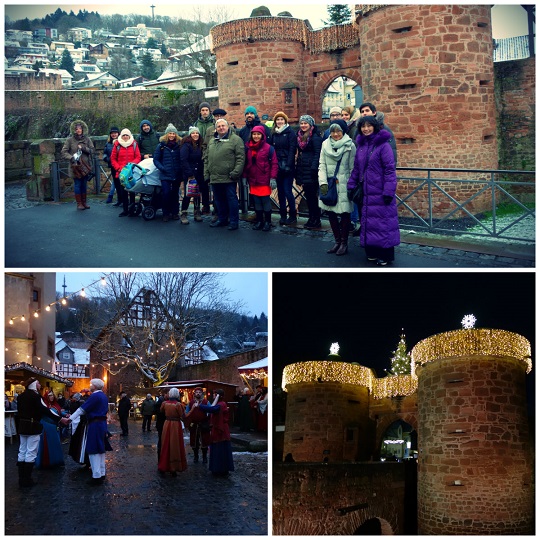 On Saturday, 9th December, the GWC and a group of international researchers took a trip to the very special Christmas market of Büdingen. This cozy market in the middle of an exceptional small medieval town seduces with its medieval castle, half timbered houses, Christmas lights and numerous colorful stalls. After enjoying a cup of hot mulled wine together, participants had plenty of time to explore culinary delights, local handcrafts and other attractions of this Christmas market. Cold weather with light snowfall contributed to a perfect seasonal atmosphere.

Excursion to Seligenstadt and visit to the Glaabsbräu brewery: November, 18th 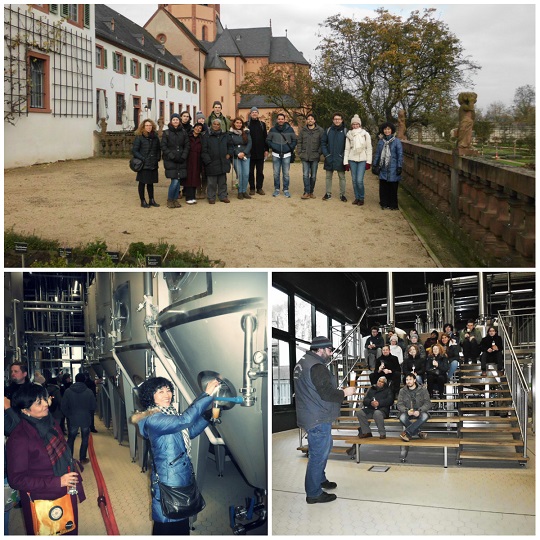 On Saturday, 18.11.2017 the GWC organized an excursion to the beautiful medieval town of Seligenstadt at the banks of river Main. After riding a very slow train through the Hessian country side we took a walk around the historical city and visited the sumptuous baroque monastery of Seligenstadt with its beautiful garden. Then we had a look at the astonishing exhibition about the history of this Benedictine abbey  and the surrounding city. After taking lunch at a traditional Hessian restaurant we completed this very special excursion with a brewery tour through the family owned Glaabsbräu Brewery. Under the guidance of the local master brewer participants learned all about the age old art of brewing beer before we were finally able to savor the various local beer specialties. 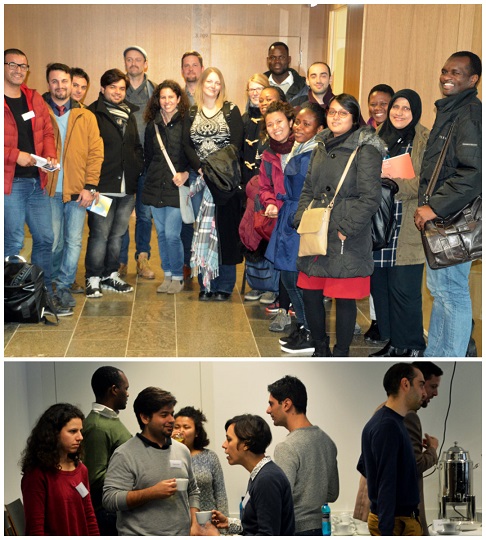 On Thursday, 16th November, the Goethe Welcome Centre (GWC), the Graduate Academy (GRADE) and the Department for Human Resources Development (PE/OE) organized an Orientation Day for international researchers at the Goethe University Frankfurt. This time 35 participants followed the invitation. The Orientation Day is held in English and takes place at the start of each semester term. Newly arrived researchers, PhD students and university staff from abroad received detailed introduction to the higher education landscape of Hesse and the Federal Republic, the GU's administrative structures and various units of GU's central administration. The participants were presented the service range of the Research Service Centre (RSC), the Goethe Research Academy for Early Career Researchers (GRADE), the Interdisziplinäres Kolleg Hochschuldidaktik (IKH), the Goethe Welcome Centre (GWC), the Department of the Personnel Development (PE) and the Equal Opportunities Office. Furthermore, an introduction into the University's history was an integral part of this event. 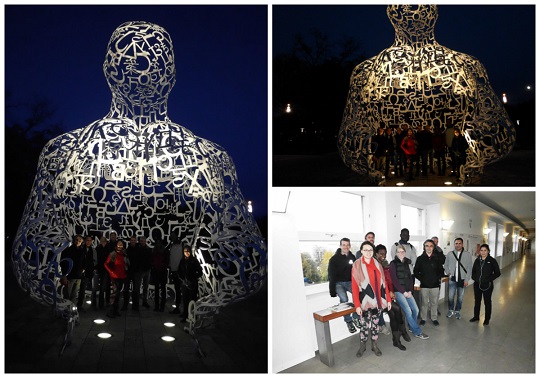 On Wednesday, 01.11.2017, the Goethe Welcome Centre invited to a guided historical tour of roughly two hours across our beautiful Westend Campus. Mr. von Bothmer led a group of international researchers from the Alzheimer  monument to the IG-Farben-Building, built by the world's greatest chemical trust of its time. After extensive information about the role of IG-Farben during the Nazi regime and the use of the company's main building as the headquarter of the US Army the group paid a visit to the Norbert-Wollheim-Memorial. We continued to the multireligious Haus der Stille and after a stopover at the Adorno monument we ended our tour with a visit to the disputed historical underground structures inside the library for  Social Sciences and Psychology. 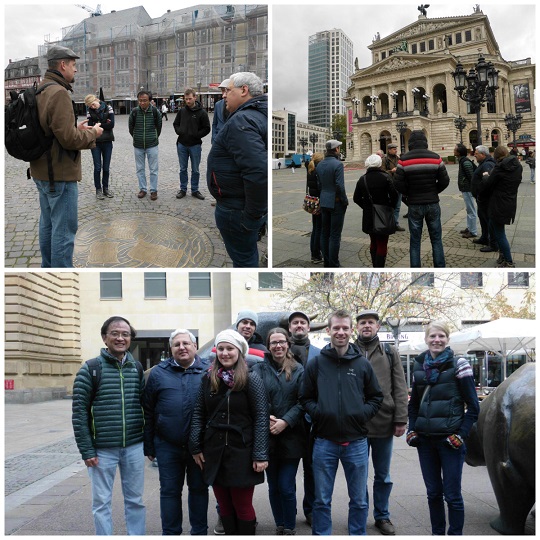 On Saturday, 28th of October, the GWC took a group of international newcomers of Goethe University to some of the most important historical sights of Frankfurt. Starting at the Neue Oper we explored the historical down-town of Frankfurt with its most famous places and buildings, including Paulskirche, Römer, Dom, Börse and Alte Oper. A definite highlight was the following guided tour through the prize winning Commerzbank Tower. We received comprehensive information on its energy-saving and environmentally sound architecture, walked through its fascinating indoor gardens and enjoyed an overwhelming view from the 49th floor. Finally we finished our tour with a traditional Hessian lunch at “Mutter Ernst", a cozy typical Frankfurter Gaststube amid the towering skyscrapers. 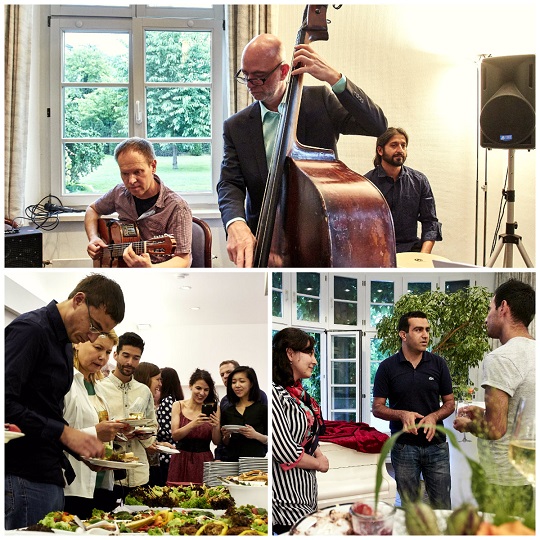 Visit to the Opelzoo: June, 26th 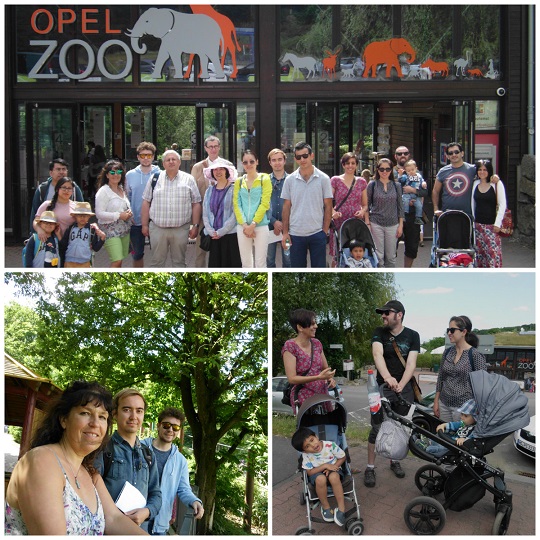 On a beautiful saturday, the GWC and 18 international researchers took a trip to the well known Opelzoo in Kronberg.

After a shared walk through the Zoo, where we saw elephants, zebras and giraffes, everybody had lunch in the restaurant "Sambesi", where a magnificant view on the elephants can be enjoyed. Rolling out of the restaurant, everybody had some free time. The families spend their time at the playground or the petting zoo, whilst others enjoyed the calm nature of the zoo. Located on a hill in Kronberg, a stunning view on the Frankfurt skyline is possible from various spots. 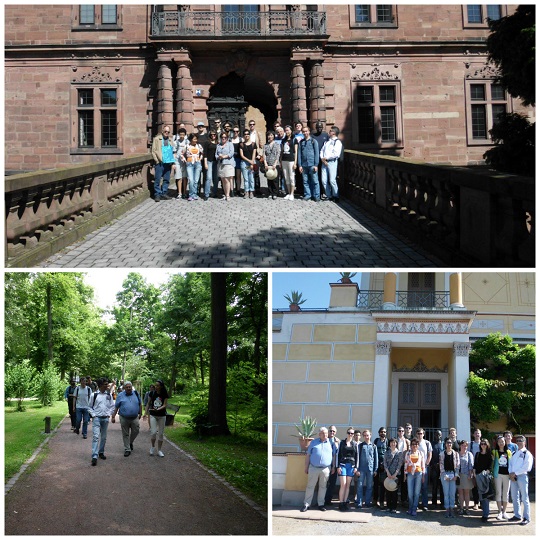 On a very sunny saturday, we went on our trip to Aschaffenburg in the neighboring state of Bavaria. We started with a guided city tour. The highlights were the stunning Pompejanum and the breathtaking Castle of Johannisburg. Following we enjoyed traditional Bavarian dishes and homemade beer in a wonderful beergarden located in the Parc Schönbusch. Lateron we went back to the Castle of Johannisburg and visited the world's largest exhibition of corkmodels. Before getting back to Frankfurt the group enjoyed some ice cream to round off the trip to the Bavarian Nice.

Excursion to Bad Homburg: May, 6th 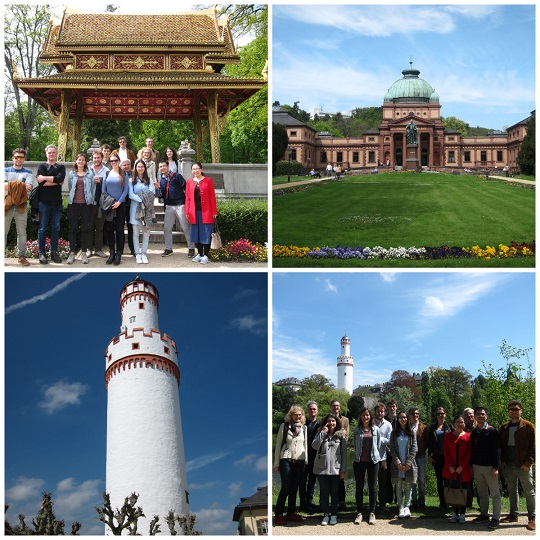 On a very sunny saturday, we explored the beautiful city of Bad Homburg. After seeing the impressive Erlöserkirche, the main protestant church of the city, we were shown the inside of the castle, that was built in 1680. Our tour guide focused on the rooms of Elisabeth, the wife of Frederick the third. Afterwards we strolled along the castlegarden and the old part of the city until we reached our lunch destination. The entire group enjoyed diverse potato dishes and after strolling through the city we made our way to the stunning "Kurpark", where we visited several mineral springs, the famous Kaiser-Wilhelms-Bad and the Casino. We ended our excursion with a wonderful coffee and cake break at the beautiful Forschungskolleg before heading back to Frankfurt. 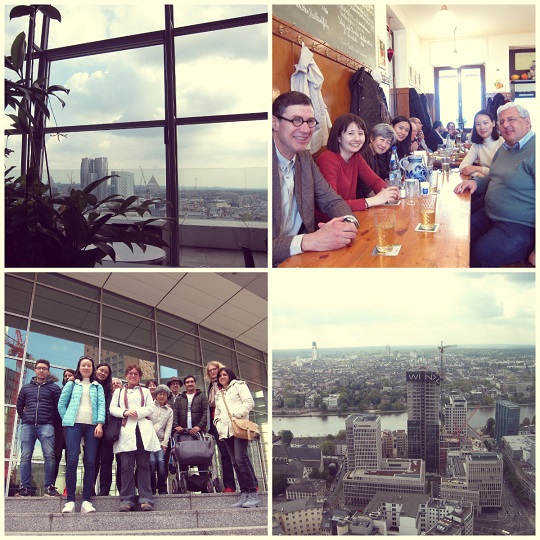 On Saturday, the 29th of April, the GWC and 15 international researchers expored the most beautiful sights of Frankfurt. We started the tour with a guided tour through the Commerzbanktower, the highest building in the city. Especially interesting were the facts, that the bank tower has several gardens located inside, where employees can relax and have lunch. After seeing Frankfurt from the 50th floor and enjoying a breathtaking view, we walked over to the Paulskirche and learned historical information about the first national assembly. Strolling along the Römer, we made our way to the restaurant "Atschel", where we enjoyed a traditional German lunch with a lot of Äppelwoi. 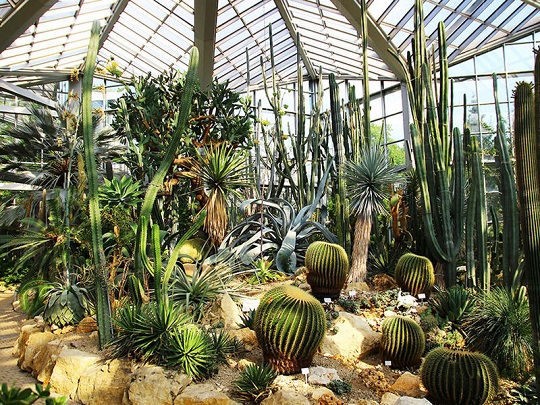 On Saturday, 11th of March, one of Frankfurt's most beautiful places was the destination of the excursion of GWC: the famous Palmengarten. It hosts extensive greenhouses filled with tropical rainforests, exquisite subtropical species and a unique collection of flowers and plants. Guided by two experts the participants explored the greenhouses and learned a lot about tropical crops, spices and herbs, among them cocoa beans, papayas and cinnamon. Following this guided tour, we spent one hour at the Special Orchids Exhibition, where innumerable different kinds of orchids were exposed and sold. Finally, we enjoyed coffee and cake at the gourmet Café Siesmayer while having conversations about the impressions we had made during our visit of Palmengarten. 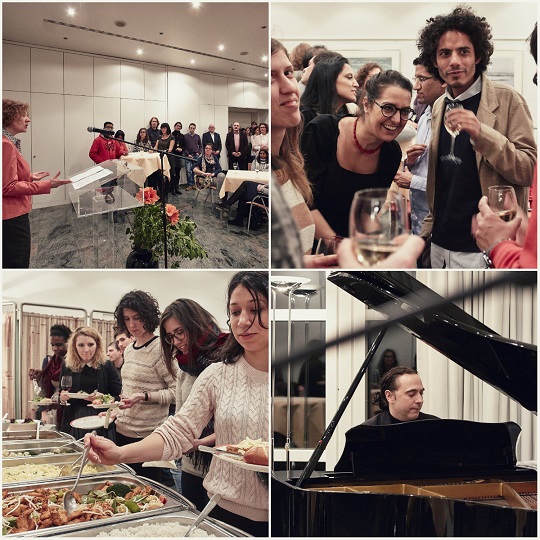 On January 30th the GWC and the “Stiftung zur Förderung der internationalen wissenschaftlichen Beziehungen" invited to Goethe University's  traditional New Year's Reception for all international researchers at GU at the guest house Frauenlobstraße. Under the patronage of GU's Vice President Prof. Dr. Brigitte Haar and together with GU's international DAAD scholars we had a beautiful dinner reception with Jazz musician Jens Hubert on the grand piano. The much anticipated New Year's speech by our Vice President stressed the great importance of international mobility for GU's academic efforts to find answers to today's great environmental, social, political, medical as well as economic challenges. According to her words GU has developed considerably towards being an internationally renowned scientific player during the last two decades. Furthermore she assured, the great emphasis will be put on further strengthening GU international profile also in 2017. 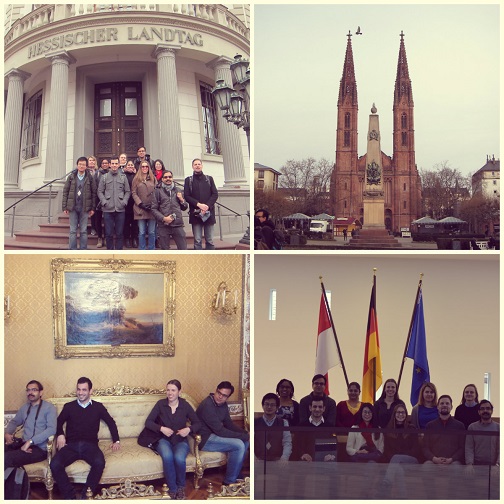 On our first excursion of 2017 the GWC took a group of 14 International Researchers and PhD Candidates to Wiesbaden, the capital of Hessen. After half an hour train ride, the group received a brief introduction to the history and economy of Wiesbaden, followed by an informative walk through the city until the Hessische Landtag was reached. A tour through the old city palace, which now serves as the seat of the state parliament, introduced the group not only to the history of Wiesbaden and the region (Dukedom of Nassau), dating back to the Roman period, but also to the contemporary political system of Hessen. After a lovely lunch in a traditional German tavern we continued the touristic down-town tour visiting some of the most important sights of the city. Despite the rainy weather we finally climbed the Neroberg to take a look at the stunning Russian-Orthodox Chapel, built for Elisabeth Michailowna Romanowa the early deceased Russian wife of Adolph Duke of Nassau and Luxemburg.