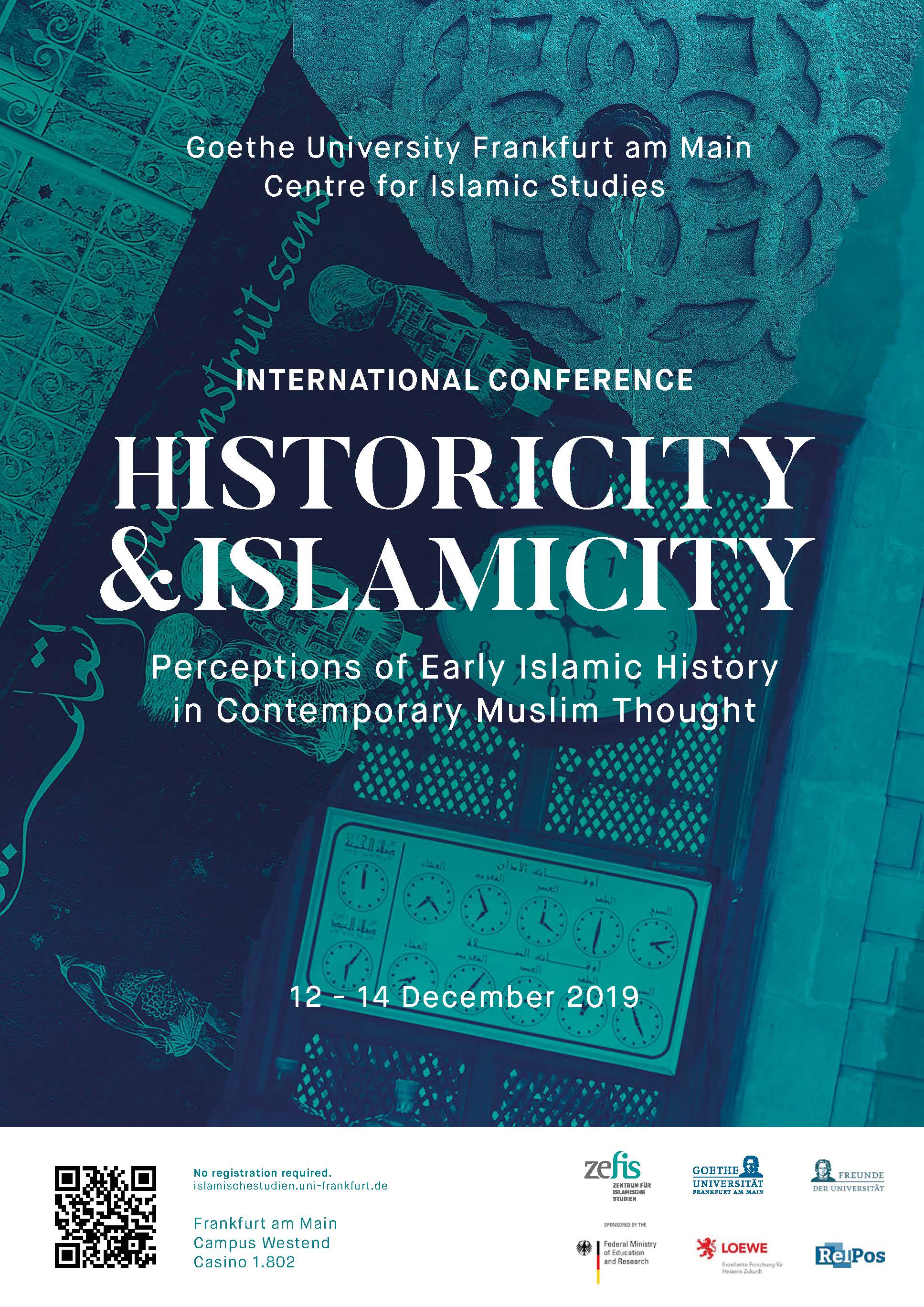 International Conference at the Center for Islamic Studies, Goethe University Frankfurt am Main,

The early history of Islam has served as an important point of reference for the construction of Islamic identities and Islamicity in general, particularly in the modern Muslim thought.

Beginning with the 19th Century, scholars of Western Oriental studies have shown a strong interest in the study of the early period of Islamic history. About the same time, the globalization of ideas in the advancing global public sphere, including modern conceptualizations of history in the newly emerging science of history, influenced the ways history was imagined and construed among intellectuals and religious thinkers in the Muslim world. The transfer of ideas resulted both in defensive stances among Muslims as well as in their adaptations of modern philosophical and political concepts to older epistemes of Islamic intellectual history. The modern reconstruction of the concept of ‘Islam’ as a historical subject, which emerged out of these entanglements, facilitated new forms of collective identity construction that in turn were justified by historical references.

For Muslim intellectuals and theologians of the 20th Century, it was especially the early period of the history of Islam that assumed an important role as such a point of reference and identification. Modern Muslim understandings of early Islamic history include the sacralization of historical processes in terms of salvation history, the construction of the complex of the ‘Golden Age’ and of the ‘times of origin’ as well as the turning of the early Islamic polity into an ideal paradigm for the justification of modern social orders. Despite the emergence of critical Muslim perspectives rooted in the methodologies of modern historical scholarship. the implications of the above-mentioned constructs have proved profoundly vital over time, especially with regard to the interpretations of religion.

On the other hand, mainly since the second half of the 20th century, some Muslim thinkers have elaborated more sophisticated approaches to the notion of historicity and developed a serious involvement with the state of the art of historical scholarship, with important consequences for the diversification of the modern Islamic theological thought. Yet, even these modern academic approaches tend to take the early history of Islam and the early texts of Islamic intellectual traditions as the main point of reference for the understanding and the normative formulations of Islamicity. Such is, for example, the case with the historical hermeneutics of the Qur’an championed by Fazlur Rahman and expressed in his double-movement-method, which focuses on the early period of Islamic history as the context for the original formulation of universal ethical principles of Islam. In a similar manner, some feminist interpretations of Islam seek to reconstruct the alleged egalitarian spirit of the early Islamic community and to ‘liberate’ the Islamic traditions from their patriarchally charged historical overload.

However, recent approaches of academic Islamic theologies developed over the past decade at European universities — and increasingly in some parts of the Islamic world – attempt to enter an interdisciplinary exchange with modern historical and textual scholarship and to integrate its results into an Islamic theological reflection that goes beyond the ideological and dogmatical distortion of history.

It is against this background that our conference attempts to shed light on the contemporary Muslim perceptions and perspectives on the early history of Islam. It will first address the mechanisms of construction of ‘early Islamic history’ and its use in the processes of identity
building among Muslims (Part One) and, in a next step, the critical and revisionist approaches to history developed by Muslims scholars (Part Two). Finally, the last part will address the current interactions and interdisciplinary exchange between Islamic theological approaches
and modern historical scholarship on Islam as well as the consequences of these involvements for the Muslim reimagination of Islamic history and for religious interpretations.