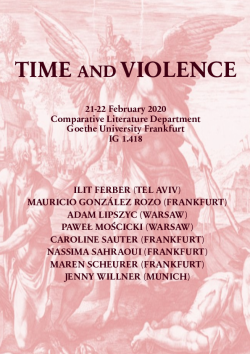 20th century philosophy abounds with a variety of exciting conceptions of temporality. Bergson’s flow of duration, Heidegger’s dramatic vision of temporal ekstases, Benjamin’s weak-messianic idea of Jetztzeit, Arendt’s idea of natality, Derrida’s deferred difference, Agamben’s time that remains – all these and other mutually conflicted visions offer possible ways of complicating our understanding of time. At least some of these ideas were directed against alienating and/or dehumanizing conceptions of time such as the mythical vision of circular temporality, biological determinism or the vision of time as measurable, empty and homogeneous. Thus, these positive visions can be seen as critical, emancipatory conceptual structures that break with the real and/or ideological modes of time that entrap us. From this point of view, the relation between various visions of time and the problem of violence becomes pertinent.

Is what we are dealing with here a clash between two forms of temporal violence – say: between the enslaving violence of the mythical time and the liberating violence of critical intervention – or are at least some of the positive visions of time – say: Bergson’s duration – free of the moment of violence? Or, to put it in a more descriptive mode: What forms of violence are correlated with various conceptions of time? But also conversely: what forms of temporality are embedded in various modes of violence as described theoretically, but also as represented in literature and visual art? And: can we perceive various forms of human violence as desperate attempts to oppose the very violence of time?

During our workshop we will address these and other questions concerning the relations between time and violence in an interdisciplinary mode, with philosophy, psychoanalysis, theology, literature, literary theory, and visual art as our fields of reference.

Special emphasis will be put on long, in-depth, free discussion of individual papers. A close reading and discussion of time and violence in Shakespeare’s Hamlet will be an integral part of the workshop.


The workshop is the sixth part of a series of gatherings that fall under the epigraph of “Violence in Philosophy and Literature”. These gatherings were particularly devoted to discuss “Language and Violence” (Tel Aviv University), “Space and Violence” (Polish Academy of Sciences, Warsaw), “Thinking and Writing – Disruption” (ZfL Berlin), “Violence Incorporated” (University of Chicago), and “Sound and Violence” (Collège International Paris) in both fields.

Please send a short note to the organizers if you wish to participate.

III. The Time is out of Joint