We investigate the interplay of interactions and gauge fields in models that are realizable with ultracold fermionic and bosonic quantum gases in optical lattices searching, in particular, for topologically nontrivial states, their characteristic excitations and fingerprints in experiments. We pursue three primary goals. First, we want to compute the quantum phase diagrams of interacting atoms on multi-leg ladders in the presence of either a homogeneous magnetic flux or in heterostructures and characterize their edge states and excitations. This research is, on the one hand, motivated by experimental realizations using superlattices or a synthetic lattice dimension, for which we will account for realistic conditions aiming at a direct comparison with experiments. On the other hand, we are interested in the evolution of fractional quantum Hall physics as the width of the ladders is increased in the crossover from one to two dimensions. Second, we will address the nonequilibrium dynamics of such systems in quantum quenches and subject to external driving. In particular, we will study quenches across topological phase transitions, heating in periodically driven systems and nonequilibrium transport in quenches of the trapping potential or in tilted lattices. Third, we will investigate fractional Chern insulators in the interacting bosonic Hofstadter and Haldane model. Our main tool will be the density-matrix renormalization-group method, applied to both one- and two-dimensional systems.

The successful implementation of artificial gauge fields in systems of ultra-cold quantum gases in optical lattices allows the systematic study of interaction effects in topological states of matter. Two paradigmatic models are the Harper-Hofstadter and the Haldane model. Our project is primarily concerned with the quantum phases and dynamics of the quasi-one-dimensional relatives of these two-dimensional systems, so-called multi-leg ladder systems. Ladders (see the figure for an example) can readily be realized in experiments by using either superlattices or a synthetic lattice dimension. We are applying numerical methods to study the rich quantum phases resulting form the interplay of reduced dimensionality, interactions and kinetic frustration due to the presence of Abelian gauge fields, both for bosonic and fermionic systems. Our key goals are to understand the evolution of the quantum phases from ladders to two-dimensional systems and to identify parameter regions for interacting Chern insulators and fractional Chern insulators. Within in the research unit we aim at devising experimentally realizable detection schemes to characterize such interacting topological states via the real-time response of trapped gases and their nonequilibrium transport properties. Moreover, a improved understanding of heating rates in driven systems will be established, which is imperative for the main goal of guiding experimental efforts towards the realization of interacting topological states of matter in optical lattices. 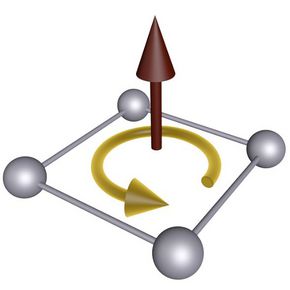 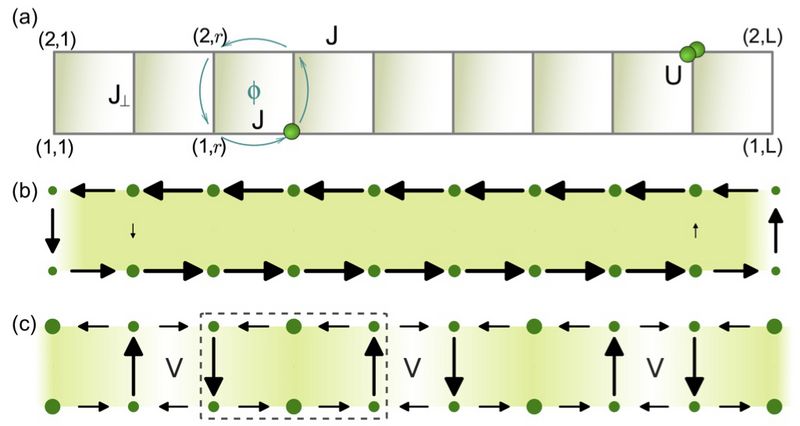 (a) Sketch of a two-leg ladder where each plaquette is pierced by a flux. Particles are subject to interactions whenever they meet on a site. (b) and (c): Typical structure of the chiral edge current in (a) so-called Meissner-like and (b) vortex phases (V). See Phys. Rev. A 94, 063628 (2016) for details.