The Earth is not flat. When presenting maps on flat surfaces, projections are needed and distortion of shapes is unavoidable. Cartograms are maps where distortion of shapes is done to convey information. More precisely, polygons for which data is available are distorted in such a way that the areas of the distorted polygons are proportional to some characteristics of the polygon. For example, to visualize how much carbon dioxide is emitted by the countries of the Earth, the polygons of the outlines of all countries are distorted such that the distorted country polygon areas are proportional to the emissions. In the cartogram, the polygon of country A, with half the emissions of country B, has only half the size of the polygon of country B.

Cartograms can be used to represent two characteristics of polygons at the same time. For example, grid cells of size 0.5° longitude x 0.5° latitude, which is the spatial resolution many global hydrological models use, can be distorted according to the population living within the grid cells, while the color of the grid cells can represent the water resources within the grid cell. In such maps, regions with a large population are shown larger than less densely populated regions. As such a cartogram attracts the eye to regions where many people live, it is better suited than a normal thematic map to show water resources for people instead of water resources on land areas.

On this webpage, we provide a number of global cartograms related to water resources as well as climate change risks and responsibilities. With one exception they are based on output and input of the global hydrological model WaterGAP that calculates water resources and water use for all continents of the Earth (except Antarctica) with a spatial resolution of 0.5°x0.5°.

Distribution of water and people 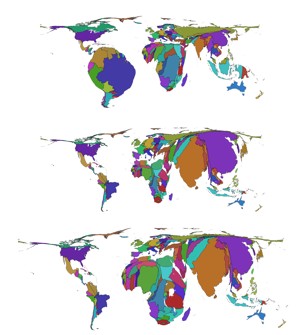 If the top and center maps looked the same, the renewable per-capita groundwater resources would be the same for all people around the world. 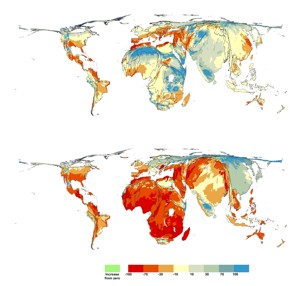 How do cartograms work 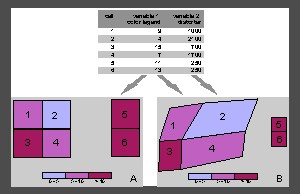 Schematic for representing information about spatial units by univariate thematic maps (map A) and bivariate cartograms (map B). While both maps represent variable 1 (e.g., per-cap CO2 emissions) by different colors, the bivariate cartogram additionally represents variable 2 by distorting the polygons of map A such that density of the distorter variable 2 (e.g., population per cartogram area) is the same in all distorted polygons.