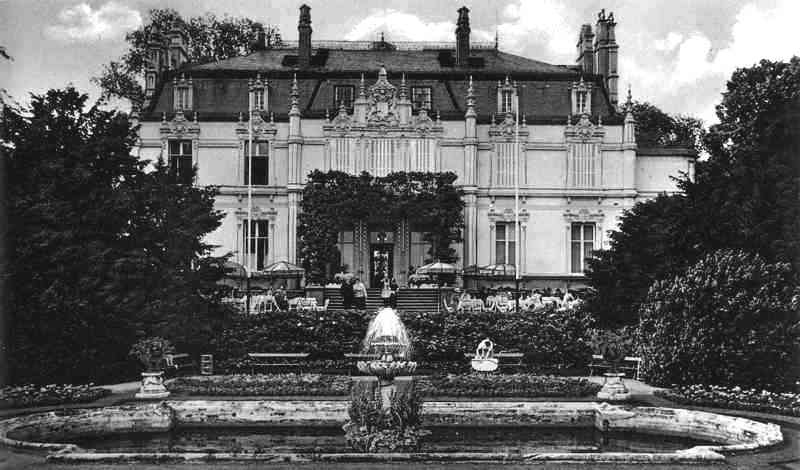 In the 18th and 19th centuries, the land on which today’s Westend Campus and the Grüneburgpark stands lay far outside the city limits. As far back as the Middle Ages, this fertile region on the fringes of the Wetterau was considered an attractive retreat for Frankfurt’s patrician families, who built their summer residences here. Up into the early modern period, it was divided into three fields: the Affensteiner Feld, the Knoblauchsfeld, and the Friedberger Feld.

The estate established on the Affensteiner Feld by the Frankfurt jeweller Matthias Riese during that period, the "farm on the Stein Kauth in the affen Stein [field]," was named after the nearby basalt quarries.[1] According to a document dating from 1777, the farm was 25 acres in size and supported seven cows. As a comparison, today’s Westend Campus—between Fürstenbergstraße, Bremerstraße, Hansaallee, Miquelallee, and the Grüneburgpark—comprises about 70 acres (incl. space in reserve, it comprises about 82 acres).[2]

The banker Peter Heinrich von Bethmann-Metzler acquired the property in 1789 and doubled it in size, purchasing two orchards from his neighbours the Goethe family —the grandparents of the famous poet. [3] He renamed the estate the Grüne Burg (Green Castle) and had it enlarged into a fortified residence. After Bethmann-Metzler’s death, the estate remained for a time in the family’s possession. His daughter Sophie and her husband led a respectable middle-class existence on the Grüne Burg, and also founded a literary salon there, attended by such famous personalities as Sophie de la Roche, Bettina von Brentano, Achim von Arnim, Karoline von Günderode and Johann Wolfgang von Goethe and his mother. Goethe was apparently charmed by his visit and wrote of the residence:

It is very pleasantly situated on a gentle rise, a good half an hour from the town before the Eschenheimer Tor [a town gate]. From the front one has a view of the whole town and the region in which it lies, and from the back of the Nidda region as far as the mountains.[4]

In 1837, almost 50 years after its purchase by Bethmann-Metzler, the banker Amschel Mayer von Rothschild (1773–1855) acquired the estate, now known as “Castle Grüneburg”. It was intended as a present and new home for Rothschild’s nephew and his wife. In 1844/45, the couple had a new residence built to the west of the existing house and had the latter converted back into a farmhouse. The extensive family’s “New Palace on the Grüne Burg” was based on French models, in a style rather unusual for Frankfurt. The park, laid out in 1850 in front of the palace gates—with pond, pavilions, and aviaries—was probably modelled on existing gardens in the vicinity of Paris.

A description of a steel engraving of a Frankfurt city plan by the painter and engraver Friedrich Wilhelm Delkeskamp, dating from 1864,[5] gives us a rough idea of the view that visitors of that time must have enjoyed:

Delkeskamp’s picturesque plan shows a three-storey building in the area of the farm buildings with an avenue leading up to it, trees planted at regular intervals, and tub plants lined up in rows. West of this lies a manor house with wings, terrace, a large park-like garden with paths curving into the distance, flower beds, pergolas, pavilions, and an elongated pond—in which what looks like a Chinese garden house is reflected.[6]

At the end of the 1870s, the estate passed into the possession of Wilhelm Carl von Rothschild and his wife, who commissioned the landscape artist Heinrich Siesmayer to transform the park into an English landscape garden.[7] In 1880, in the course of restructuring work, the farm building—the original “Grüneburg”—was demolished.  Under the National-Socialist reign of terror, the Rothschild family was to all intents and purposes dispossessed through the imposition of enormous “special taxes”. In 1938/39, the Frankfurt branch fled to France. The name chosen by Bethmann-Metzler, the “Grüneburg”, has endured.[8] But the New Palace was so badly damaged by bombing during the Second World War that its ruins were simply cleared away after the war.