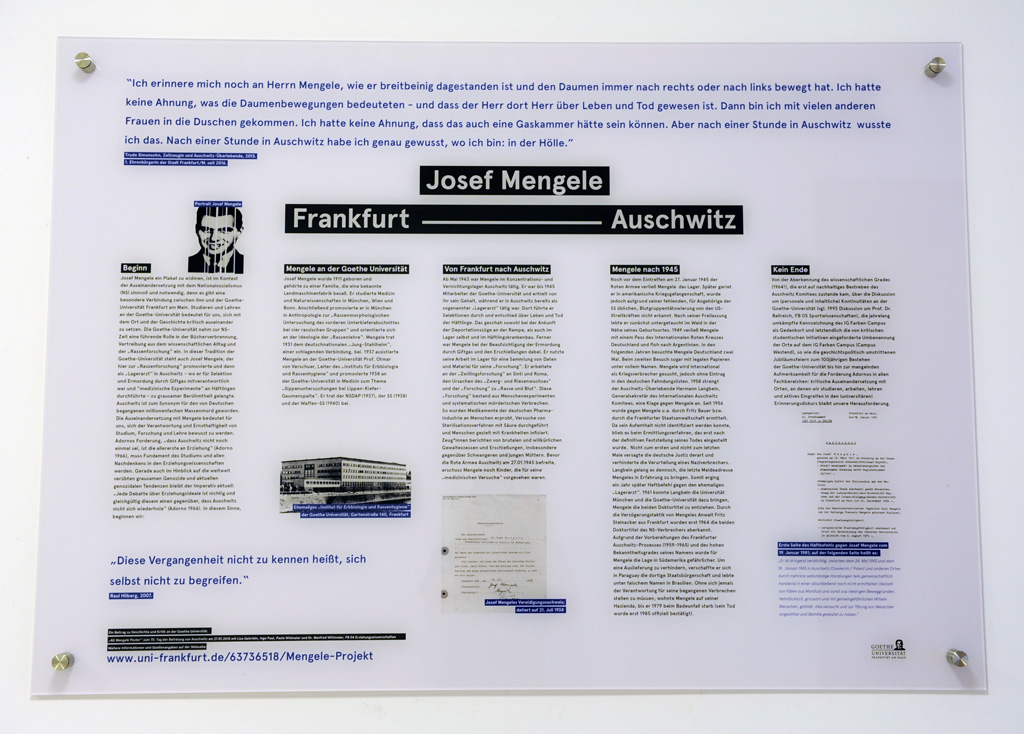 Within a framework of memorial culture, (academic) discussion of Nazi perpetrators is hardly an issue. Necessary in and of itself, it is not be conceived or mistaken as opposed to the grief of the victims and the commemoration for them.

On January 27th 2015, a delegation of students and employees of Goethe University’s faculty of education sciences attended the international commemoration ceremony marking the 70th anniversary of the liberation of Auschwitz. After very moving encounters with very special people, and equipped with deep impressions, discussions began to revolve around how to structure and publicly present research on Josef Mengele, the infamous Nazi doctor.

We hope to stimulate academic and popular discussion, both inside and beyond the academic bounds of the university.

A poster of Josef Mengele in Frankfurt means more than facing up to National Socialism (NS). It also means facing the connection between the academic world and the crimes against humanity committed in the name of “science” and “medical research”. It means realizing the role our university had in all this. Studying, working and teaching at Goethe University in our day means to realize its history and its site. Our university played a crucial role in the Nazi book burnings, the forced expulsion and banishment of Jewish scholars from all academic positions and activities, and in “racial research “.

Josef Mengele is part of this very tradition of Goethe University. Here he received a doctor’s degree in “racial research”, before becoming chief physician in the Auschwitz extermination camp. Considered a scholar, he had the leading part in the process of “selection” and murdering of prisoners with poison gas, as well as conducting horrifying “medical experiments”. His “science” was accepted as was his cruelty. It was this unprecedented cruelty based on this unprecedented “research” which made Auschwitz become synonymous for the unprecedented industrial millionfold mass murder committed by the Germans.

Contemplating all this and more about Mengele means for us to become aware of the responsibility and seriousness of academic research, scholarship, studying and teaching. „The prime demand upon all education is that Auschwitz not occur again“ (Adorno 1966). This imperative demand must become the basis of all aspects in the field of education, including research and studies. Adorno’s imperative retains significance for all time, as he himself urges: „Every debate about the ideals of education is trivial and inconsequential compared to this single ideal: never again Auschwitz.“ (Adorno 1966). That stated and kept in mind, we begin.

Josef Mengele was born in 1911 into a well-known family in the agricultural machine manufacturing business. At age 20, Mengele joined the German nationalist group “Jung-Stahlhelm“ and studied medicine and natural sciences in Munich, Vienna and Bonn. Afterwards he received a PhD in anthropology in Munich on “Racial-Morphological Examination of the Anterior Portion of the Lower Jaw in Four Racial Groups“. The basis for his work was construed on racist ideologies. In 1937, he began his academic assistance at Goethe University’s “Institute for Hereditary Biology and Racial Hygiene” under the professorship of Otmar von Verschuer, where he received a doctor’s degree in medicine on “Genealogical Studies in the Cases of Cleft Lip-Jaw-Palate” in 1938. He joined the NSDAP (1937), the SS (1938) and the Waffen-SS (1940).

From Frankfurt to Auschwitz

From May 1943 until January 1945, Mengele was active in the Auschwitz concentration and extermination camp. During that time, he was still on the payroll of Goethe University, where his salary as „camp physician“ came from. As such, he made the “selections”: deciding between life and death of the inmates not only immediately upon arrival of the trains directly on the platform, but also inside the camp itself and in the so-called “prisoner hospital”. Furthermore, he was involved in the systematic murder by poisonous gas and at the firing squad. He used his work at the camp to gain data and material for his “research”. His “experiments” on children, especially twins, are just one example of such “research”. Others include “dwarfism and gigantism” and “race and blood”. This “research” consisted of “experiments” on humans with systematic murderous outcome. He tested sterilisation with acid on young inmates. People were purposefully infected with diseases and then new medications from German pharmaceutical industries were tested on them. Witnesses reported brutal, arbitrary violence and shooting, especially on pregnant women and young mothers. Just before the Red Army liberated Auschwitz on January 27th 1945, Mengele shot children whom he selected for his “medical experiments”.

Just before the Red Army arrived at Auschwitz, Mengele left the camp. He was captured and taken prisoner-of-war by the US Army, however not recognised as a member of the “SS”: he did not have the tattoo common for members of the “SS”. After his release he lived in the woods near his birthplace in Günzburg/Bayern. Mengele left Germany in 1949 to Argentina with a passport of the International Red Cross. In the following years, Mengele visited Germany twice, and once even with legal papers and his full name – at a time by which an international search warrant for him as a war criminal was issued (with exception of Germany). In 1958, Auschwitz survivor Hermann Langbein, general secretary of the International Auschwitz Committee, filed a suit against Mengele. As of 1956, an investigation against Mengele was led by Hessen State Attorney Fritz Bauer and the Frankfurt Attorney General. With Mengele’s residence not identified, the investigation remained incomplete and was closed only upon certified notice of his death. The German prosecution authorities failed, neither for the first nor for the last time, and prevented the conviction of a Nazi criminal. Nevertheless, Langbein managed to find Mengele’s last registered address. Thus, a year later the order for the arrest of the former “camp doctor” was issued. In 1961 Langbein could convince both Goethe University in Frankfurt and Ludwig-Maximilian University in Munich to withdraw Mengele’s doctoral degrees. It took until 1964 to have these academic degrees retracted, mostly due to the delaying tactics of Mengele’s Frankfurt attorney Fritz Steinacker.

Due to the prominence of the Frankfurt “Auschwitz Prozess” (1959-1965) and the prominence of his name, Mengele’s situation in South America grew difficult. To prevent surrender he wrangled the citizenship of Paraguay and lived in Brazil under false name. Without ever taking responsibility for his crimes, Mengele lived on his hacienda until he died in a swimming incident in 1979 (his death was pronounced officially only in 1985).