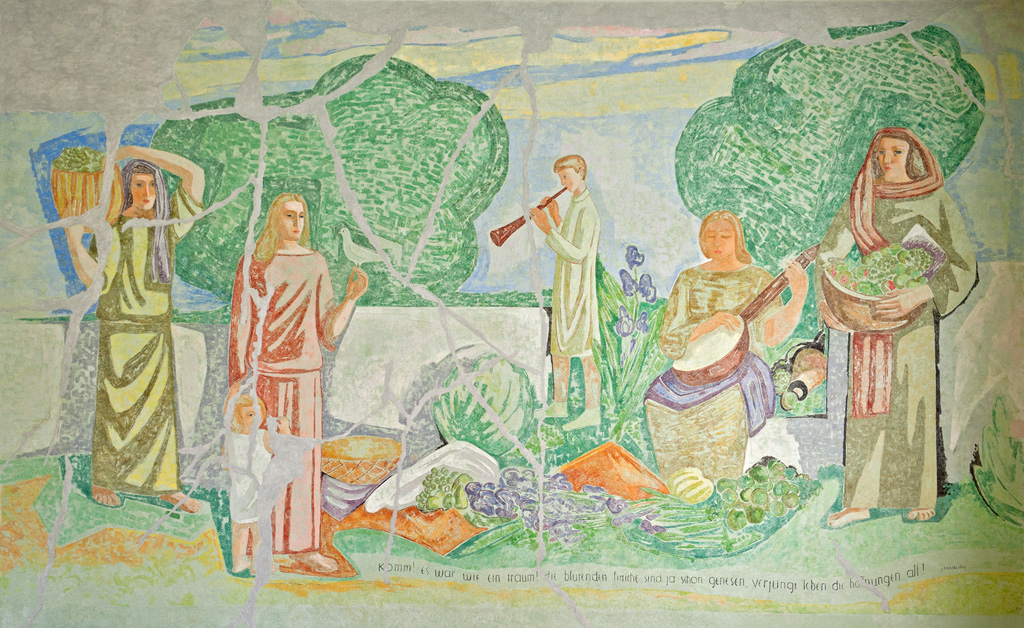 In Seminar Room 1.812 in the Casino is a 3.5 by 5 metre mural that takes up almost the whole of the rear wall. The room's green painted walls harmonise with the tones in the picture. In the rural landscape, figures dressed in monochrome archaic garments appear to be bringing in the harvest while others play music. Presumably the scene is set in the early hours of the evening: yellowish streaks on the horizon suggest a sunset. We can see six figures in all, each placed in isolation. Two women carry baskets of fruit or vegetables while another sits on a wall playing a mandolin. A fourth woman carries a white dove on her left hand while with her right she embraces a small child who appears to be clutching her garments. Directly below the woman's feet begins a banderol with the following quotation from Hölderlin's poem "Menon's Lament for Diotima": Come! It was as a dream. For the bleeding wings are already healed; all hope, rejuvenated, lives on! In the background the tops of two trees are visible, their trunks hidden by a whitish wall.

Heck received the commission for this work in 1929 through the mediation of the von Schnitzlers. Lilly von Schnitzler was befriended with Max Beckmann, and following the request of her husband Georg von Schnitzler, a member of the concern's executive board, she furnished the IG Farben Building with art works. Heck completed the mural in 1934, but shortly afterwards it was painted over, for Nazi ideology condemned the artist as "degenerate": the Frankfurter Volksblatt likened his works to "the creations of mentally ill or feeble-minded children."

After the Second World War, the IG Farben complex became headquarters of the US Military in Germany, and in 1949 the mural was rediscovered. It was immediately decided to free the work from its coat of paint, though the decision may have been prompted by the initial assumption that a painting by Max Beckmann lay beneath: Lilly von Schnitzler was a collector of Beckmann's works. As soon as the error was noticed, the Americans contacted Heck, who still lived in the Frankfurt suburb of Nied, and with him planned the restoration of his creation. But an examination of the mural's condition presumably produced such disheartening results that the project was abandoned: the paint-over was mixed with a binding agent that even today is extremely difficult to dissolve. The layers of paint covering the mural thus had to be removed using scalpels, and only in 2006, after almost a year of labour, was Heck's painting exposed to public view once more. The restoration work cost a total of € 200,000: an appeal for donations was launched by Klaus-Ludwig Schulz, Chairman of the Georg Heck Society as early as 2001. Private donations totalling over € 60,000 and funds from the German Foundation for Monument Protection enabled costs to be met. Funds were also made available from the University Archive, that ultimately coordinated all contributions and assumed the technical direction of the restoration project.

Today the work's significance does not lie primarily in its evocation of paradise but rather in its historical context. For uncovering the mural was a paradigmatic act. The National Socialists had burnt Heck's pictures from public collections on the Römerberg in front of Frankfurt's town hall, and many of Heck's other works were likewise later destroyed by fire during a bombing raid on Frankfurt. In restoring the mural in the Casino of the IG Farben Building, not only has a work by Heck that was lost for decades been saved from obscurity. In the context of the building's history, the recovery of Heck's work is also a symbolic gesture against the spiritual barbarism of the National Socialists—after over sixty years his creation has been rescued from their destructive tyranny.

Yet an inconspicuous detail indicates that even in the 1930s an attempt was made to protect Heck's work. In the lower right-hand corner of the picture, somebody has written "Heck 36". Probably this inscription, dated after Hitler's seizure of power, was an endeavour to give the painting a certain legitimacy—but without success.

Georg Heck was born in Frankfurt in 1897, where he died in 1982. After serving in the First World War, he enrolled in the Städel Art School in 1923. In the Second World War, he was once more forced to serve, not only as an air raid warden but also, in 1945, as a soldier on the Hungarian front. After 1946, Heck lived in the Frankfurt suburb of Nied, where he was active as a freelance artist.

This text appeared as a contribution to the series "Art in Focus" in the University Archive. Information on other art works on the Westend Campus and Riedberg Campus may be found HERE