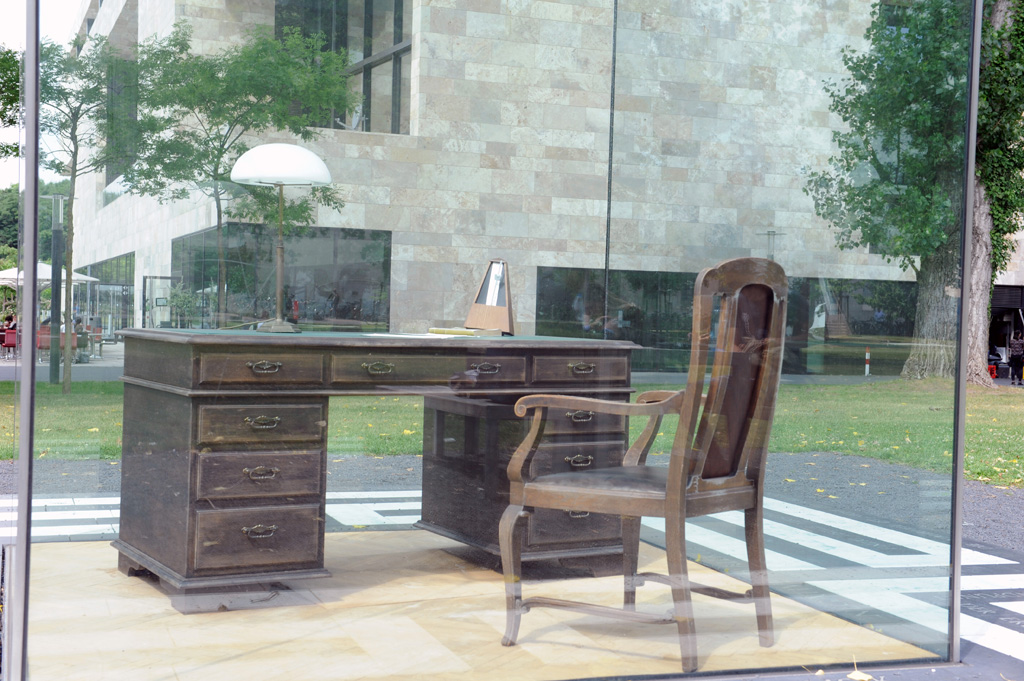 “Our entire life has its origin in the ‘study’. All of culture emanates from a private domain. This domain gives birth to global ideas that have entirely altered our consciousness.” [1]

To mark his 100th birthday in July 2003, the City of Frankfurt erected a monument to the philosopher, sociologist, and music theorist Theodor W. Adorno. The monument, created by Russian artist Vadim Zakharov, who lives in Cologne, represents a workplace with writing desk and chair in a glass cube 2.5 meters square and 2.7 meters high, surrounded by a 1.55 meter-wide area of black-and-white marble and granite slabs arranged to form a labyrinth. Inside the cube, parquet flooring has been laid; various objects lie on the desk. The fact that the desk is not a reconstruction of an original but was designed by the artist himself is immaterial. The point of the monument is, precisely, not to display Adorno’s original workplace but to create an image of the philosopher.

At the monument’s inauguration in October 2003, Zakharov described the desk and accompanying paraphernalia as “the true expression of Adorno’s personality”.[2] In the tradition of Moscow Conceptualism, he chose to present the philosopher by documenting his ideas. Thus the functioning desk lamp symbolises his propensity for working at night and the ticking metronome his achievements as composer. Likewise, the edition of Adorno’s Negative Dialectics (1966), placed on an otherwise remarkably tidy desk, represents his philosophical works; manuscripts and sheets of music indicate the main foci of his work. Quotations from Adorno’s Minima Moralia (1951) and Aesthetic Theory (1970) are engraved into the paving slabs surrounding the glass cube. They provide insights into Adorno’s thinking and inspire visitors to reflect on his philosophical ideas. The monument dispenses with traditional forms of commemoration—such as a portrait, plinth, or dates of birth and death—as well as with an explanation of the quotations.

The jury had to choose between six entries and was enthusiastic in its praise of Zakharov’s design. Jury member Udo Kittelmann (from 2002 to 2008 Director of the Frankfurt Museum of Modern Art) considered the monument “intelligent and subtle, inspiring curiosity in Adorno”.[3] However, discussion on the monument was marked by controversy.[4] The legitimacy of the monument was questioned, citing Adorno’s own critique of the claim “that whoever has the dubious good fortune to live later, and has a professional interest in the person in question, therefore has a sovereign right to assign the deceased his place in history and thus, as it were, to place himself above the latter.”[5] The discussion was not just about alternative modes of representation but about interpretations of the “study” in the light of Adorno’s aesthetic theories.[6]