Channelrhodopsin‐2 (ChR2) is a light‐gated cation channel and was used to lay the foundations of optogenetics. Its dark state X‐ray structure has been determined in 2017 for the wild‐type, which is the prototype for all other ChR variants. However, the mechanistic understanding of the channel function is still incomplete in terms of structural changes after photon absorption by the retinal chromophore and in the framework of functional models. Hence, detailed information needs to be collected on the dark state as well as on the different photointermediates. For ChR‐2 detailed knowledge on the chromophore configuration in the different states is still missing and a consensus has not been achieved. Using DNP‐enhanced solid‐state MAS NMR spectroscopy on proteoliposome samples, we unambiguously determine the chromophore configuration in the desensitized state, and we show that this state occurs towards the end of the photocycle. Becker-Baldus et al. Angewandte Chemie Intl Ed 2021

In a joint project with the Schwalbe lab, we performed DNP NMR experiments to probe cysteines in the eye-lens protein γB-crystallin in the ribosome exit tunnel. These experiments, together with L-NMR, MS and cryo-EM, showed that cys modifications such as  disulfide bond formations can occur already prior to nascent chain release as the ribosome exit tunnel which can guide protein folding.

10.3.2020: Congratulations to Dr. Julian de Mos on the successful completion of his PhD!

Although the rapid development of sensitivity-enhanced solid-state NMR (ssNMR) spectroscopy based on dynamic nuclear polarization (DNP) has enabled a broad range of novel applications in material- and life sciences, further methodological improvements are needed in order to unleash the full potential of DNP-ssNMR. Here, a new methyl-based toolkit for exploring protein structures is presented, which combines signal-enhancement by DNP with heteronuclear Overhauser effect (hetNOE), carbon-carbon-spin diffusion (SD) and strategically designed isotope-labeling schemes. It is demonstrated that within this framework, methyl groups can serve as dynamic sensors for probing local molecular packing within proteins. Furthermore, they can be used as 'NMR torches' to selectively enlighten their molecular environment e.g. to selectively enhance the polarization of nuclei within residues of ligand-binding pockets. Finally, the use of 13C-13C spin diffusion enables probing carbon-carbon distances within the subnanometer range, which bridges the gap between conventional 13C-ssNMR methods and EPR spectroscopy. The applicability of these methods is directly shown on a large membrane protein, the light-driven proton pump green proteorhodopsin (GPR), which offers new insight into the functional mechanism of the early step of its photocycle.

Presentations from the lab: Johanna Becker-Baldus

4.7.2019: Congratulations to Dr. Jakob Maciejko on the successful completion of his PhD!

9.5.2019: Congratulations to Dr. Kristin Möbius on the successful completion of her PhD!

Proteorhodopsin (PR) is a highly abundant, pentameric, light-driven proton pump. Proton transfer is linked to a canonical photocycle typical for microbial ion pumps. Although the PR monomer is able to undergo a full photocycle, the question arises whether the pentameric complex formed in the membrane via specific cross-protomer interactions plays a role in its functional mechanism. Here, we use dynamic nuclear polarization (DNP)-enhanced solid-state magic-angle spinning (MAS) NMR in combination with light-induced cryotrapping of photointermediates to address this topic. The highly conserved residue H75 is located at the protomer interface. We show that it switches from the (τ)- to the (π)-tautomer and changes its ring orientation in the M state. It couples to W34 across the oligomerization interface based on specific His/Trp ring orientations while stabilizing the pKa of the primary proton acceptor D97 within the same protomer. We further show that specific W34 mutations have a drastic effect on D97 and proton transfer mediated through H75. The residue H75 defines a cross-protomer Asp–His–Trp triad, which potentially serves as a pH-dependent regulator for proton transfer. Our data represent light-dependent, functionally relevant cross talk between protomers of a microbial rhodopsin homo-oligomer.

Escherichia coli diacylglycerol kinase (DGK) is an integral membrane protein, which catalyses the ATP-dependent phosphorylation of diacylglycerol (DAG) to phosphatic acid (PA). It is a unique trimeric enzyme, which does not share sequence homology with typical kinases. It exhibits a notable complexity in structure and function despite of its small size. Here, chemical shift assignment of wild-type DGK within lipid bilayers was carried out based on 3D MAS NMR, utilizing manual and automatic analysis protocols. Upon nucleotide binding, extensive chemical shift perturbations could be observed. These data provide evidence for a symmetric DGK trimer with all of its three active sites concurrently occupied. Additionally, we could detect that the nucleotide substrate induces a substantial conformational change, most likely directing DGK into its catalytic active form. Furthermore, functionally relevant interprotomer interactions are identified by DNP-enhanced MAS NMR in combination with site-directed mutagenesis and functional assays.

The ATP-binding cassette (ABC) transporter MsbA is an ATP-driven lipid-A flippase. It belongs to the ABC protein superfamily whose members are characterized by conserved motifs in their nucleotide binding domains (NBDs), which are responsible for ATP hydrolysis. The structural foundations underlying the nucleotide binding to MsbA were explored using a concerted approach based on conventional- and DNP-enhanced solid-state NMR, pulsed-Mn2+-EPR (in collaboration with Thomas Prisner, Frankfurt) and MD simulations (with Claudio Soares, Lisbon). MsbA reconstituted into lipid bilayers was trapped in various catalytic states. Our data provide evidence for an additional nucleotide-binding site in close proximity to the Q-loop and the His-Switch, which is required for the recently discovered reverse adenylate kinase (rAK)-like reaction catalyzed by MsbA in addition to ATP hydrolysis.

28.2.2018: Congratulations to Dr. Hundeep Kaur on the successful completion of her PhD! 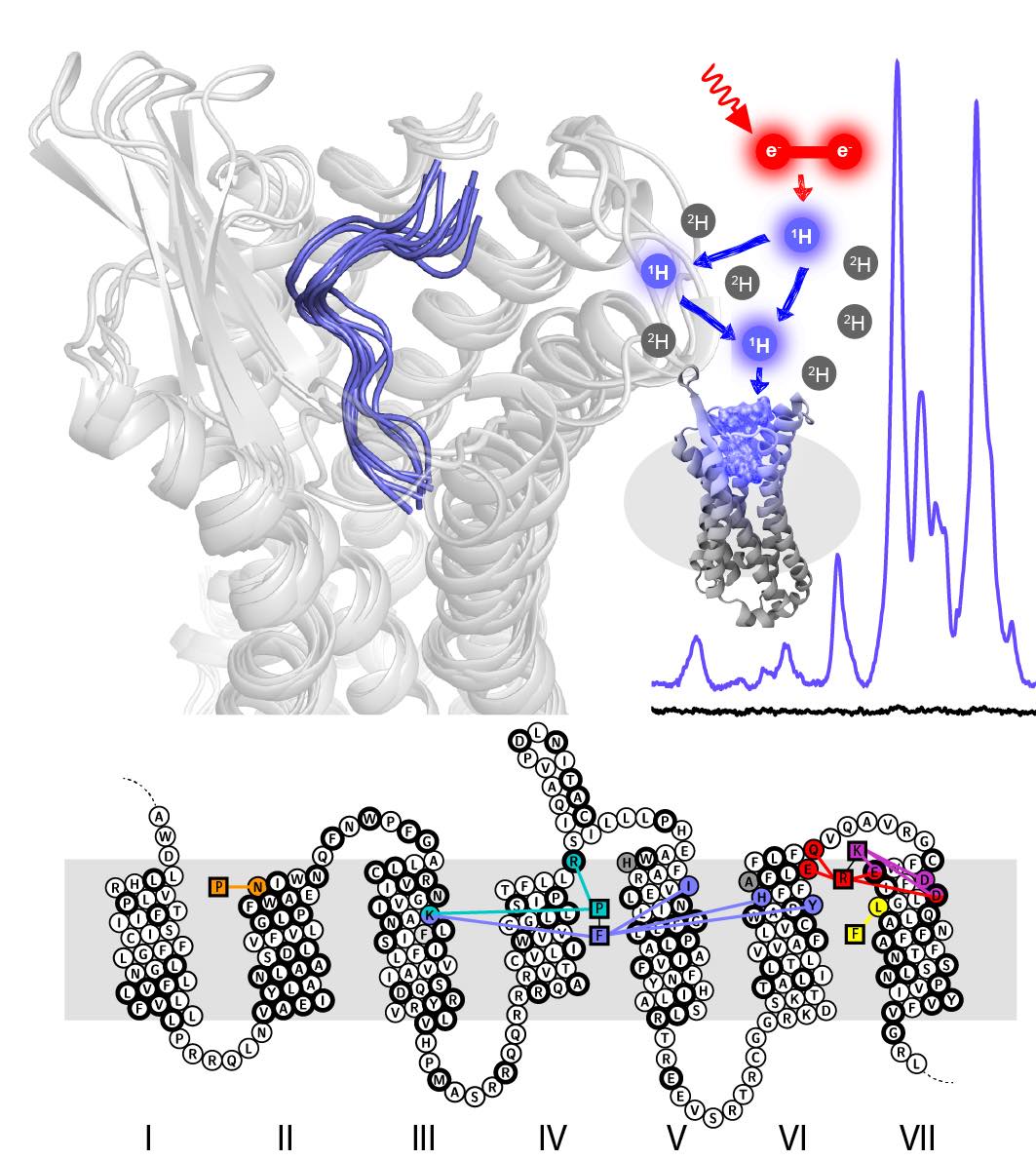 GPCRs are the most important signal transducers in higher eukaryotes. Despite considerable progress, the molecular basis of subtype-specific ligand selectivity, especially for peptide receptors, remains unknown. Here, by integrating DNP-enhanced solid-state NMR with advanced molecular modeling and docking, the mechanism of the subtype selectivity of human bradykinin receptors for their peptide agonists has been resolved. The detailed molecular picture obtained by this approach opens a new gateway for exploring the complex conformational and chemical space of peptides and peptide analogs for designing GPCR subtype-selective biochemical tools and drugs.

MsbA, a homodimeric ABC exporter, translocates its native substrate lipid A as well as a range of smaller, amphiphilic substrates across the membrane. Magic angle sample spinning (MAS) NMR, in combination with dynamic nuclear polarisation (DNP) for signal enhancement, has been used to probe two specific sites in transmembrane helices 4 and 6 of full length MsbA embedded in lipid bilayers. Significant chemical shift changes in both sites were observed in the vanadate-trapped state compared to apo state MsbA. The reduced spectral line width indicates a more confined conformational space upon trapping. In the presence of substrates Hoechst 33342 and daunorubicin, further chemical shift changes and line shape alterations mainly in TM6 in the vanadate trapped state were detected. These data illustrate the conformational response of MsbA towards the presence of drugs during the catalytic cycle. 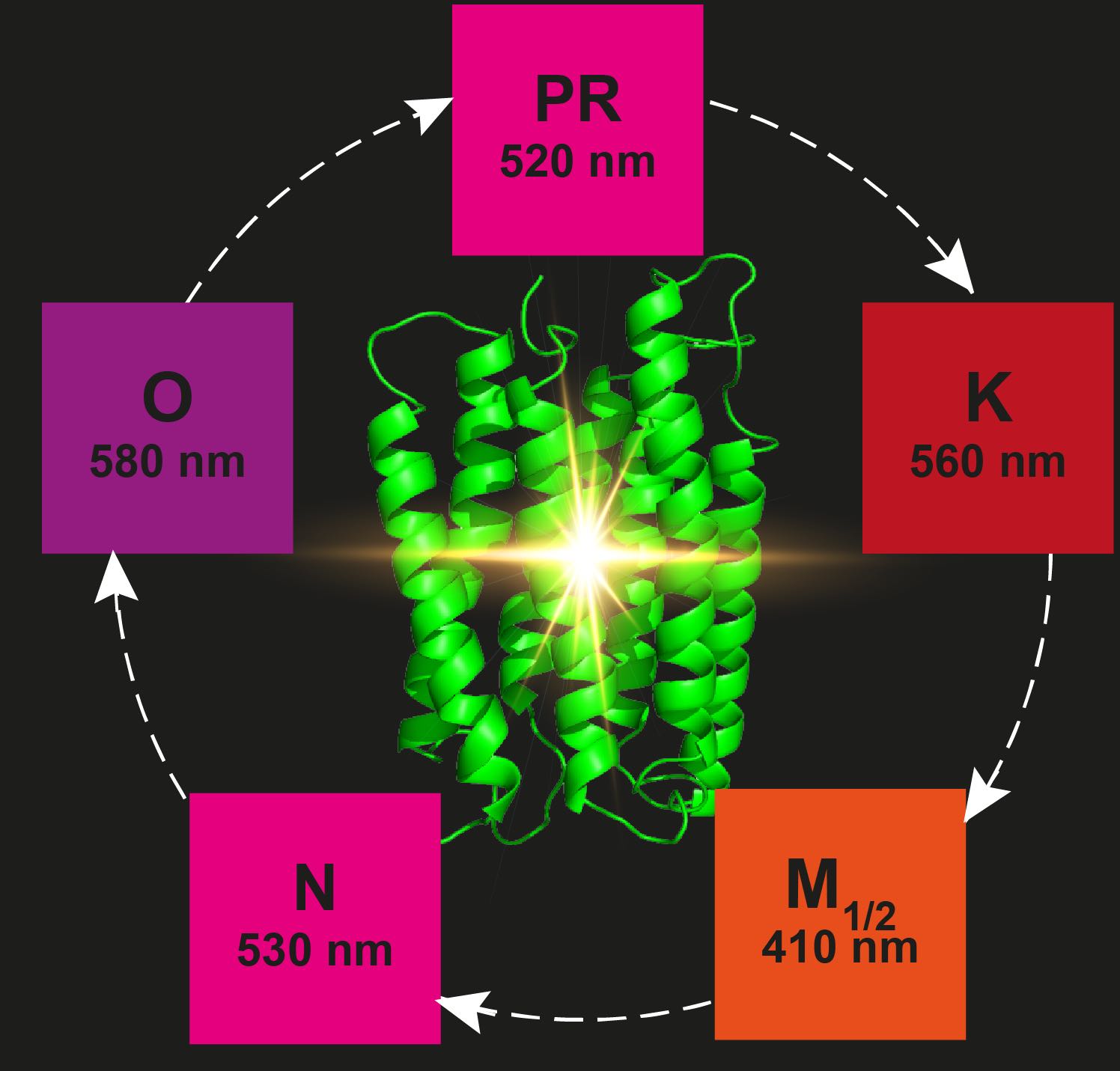 Proteorhodopsin (PR) is the most abundant retinal protein on earth and functions as a light-driven proton pump. Despite of extensive efforts, structural data for PR photointermediate states have not been obtained. Based on DNP-enhanced solid-state NMR, we were able to analyze the retinal polyene chain between positions C10 and C15 as well as the Schiff base nitrogen in the ground state in comparison to light induced, cryo-trapped K- and M-states. A high M-state population could be achieved by preventing reprotonation of the Schiff base through a mutation of the primary proton donor (E108Q). Our data reveal unexpected large and alternating 13C chemical shift changes in the K-state propagating away from the Schiff base along the polyene chain. Furthermore, two different M-states have been observed reflecting the Schiff base reorientation after the de-protonation step. Our study provides novel insight into the photocycle of PR and also demonstrates the power of DNP-enhanced solid-state NMR to bridge the gap between functional and structural data and models.

Speaker from the lab: Clemens Glaubitz

Speaker from the lab: Clemens Glaubitz

Presenter from the lab: Hundeep Kaur

27.2.2017: Congratulations to Dr. Michaela Mehler on the successful completion of her PhD! 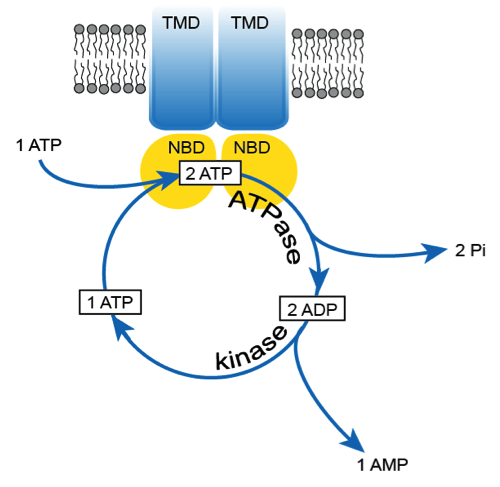 Coupled ATPase-adenylate kinase activity in ABC transporters:ATP-binding cassette (ABC) transporters form a superfamily of integral membrane proteins found in all kingdoms of life, which translocate essential substrates across cellular membranes. Many of these proteins are responsible for multidrug resistance and genetic disorders in humans. These diseases can be a result of either a mutation resulting in dysfunctional protein or overexpression under certain conditions. The generally accepted paradigm links the transport process carried out by specialised transmembrane domains with ATP hydrolysis as the power stroke catalysed by highly conserved, intracellular nucleotide binding domains. In the current study Kaur et al. demonstrate by solid-state NMR combined with biochemical data that ATP hydrolysis in MsbA, a typical ABC exporter involved in lipid A translocation, is intrinsically linked with an adenylate kinase mechanism by which some of the consumed ATPs get recycled. Both mechanisms are associated with the same conserved motifs of the nucleotide-binding domains. The same observations were made for two additional ABC exporters from other organisms suggesting that the coupled mechanism is a general feature at least for members of this protein superfamily subclass. Such a coupled and cyclic catalytic activity adds another layer of complexity to the general molecular mechanism of ABC transporters. However, the presented data also indicate that these proteins might be able to adjust their catalytic capabilities to altered cellular situations: Under conditions of ATP excess, ATP hydrolysis alone dominates the catalytic cycle, while in cases of cellular stress associated with ATP depletion events, a coupling with an adenylate kinase mechanism is advantageous in order to maintain the protein’s transport activity, which is essential for cellular survival.

2016 Meetings with Contributions from the Lab